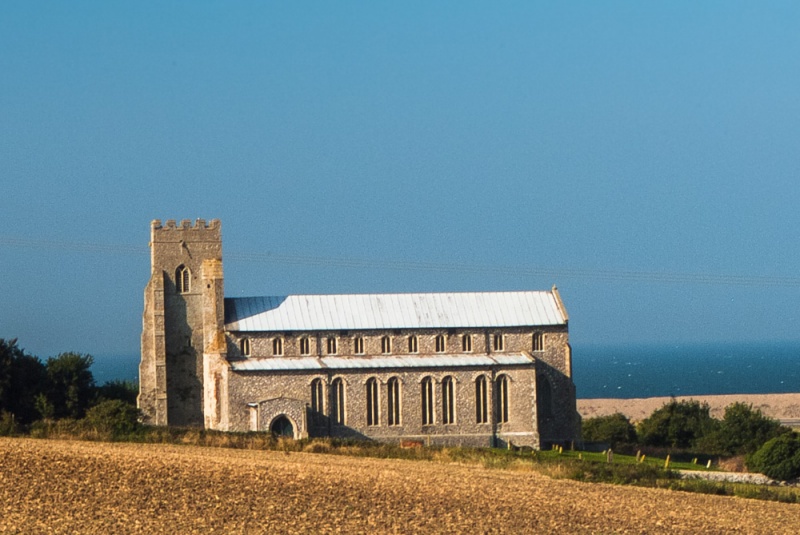 St Nicholas church dates to the middle of the 13th century, but most of the current building is a result of a major rebuilding in the late 15th century. Only a part of the west end and tower survives from the earlier church.

The church consists of a west tower, a combined nave and chancel, north and south aisles, north and south porches, and a vestry on the north side. Some historians think there were actually two previous churches at Salthouse, perhaps a Norman building, now lost, to the north of the current building.

It seems certain that the current church dates to about 1500 and was carried out under the patronage of Sir Henry Heydon of Baconsthorpe Castle, probably using workmen who also worked on the castle. Construction was finished in 1503.

The church stands on a hill, offering wonderful views along the coast and out to sea. The interior features a beautifully carved 15th-century lion font. Look for the figures of very appealing, cheerfully cute lions supporting the pedestal base of the font. Above the lions are a series of panels, perhaps recut, featuring symbols of the 4 Evangelists, with the Instruments of the Passion and a Tudor rose. 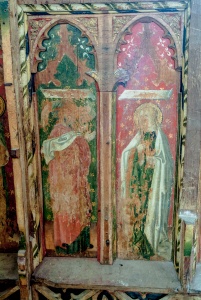 There is a glorious painted chancel screen dated to 1513, with lovely wood carving, and paintings of saints defaced during the Reformation. These figures are arranged in pairs, facing each other, and are beautifully painted (apart from the iconoclastic scratched faces). Two of the figures are almost certainly secular; a man and a woman holding purses. The most likely conclusion then, is that these are Sir Henry Heydon and his wife, patrons of the new church, and presumably, the screen.

There is a memorial brass in the chancel floor to Robert Fevyr (d. 1519), the first rector of St Nicholas after the 16th-century rebuilding.

'Within the steeple under the belfry is a very strong room with two doors called ‘Hell’, which probably was made use of as a dungeon, Hereticks prison or a Purgatory, it is now only a lumber room.' One unusual thing that brings visitors to Salthouse is a series of 16th-century graffiti scratched into the screen and the choir stalls. Though somewhat defaced by later graffiti, the ship outlines are easy to make out.

Why ships? Well, Salthouse is on the coast, associated with the port at Blakeney Haven, so the parishioners were seafaring folk. The most likely reason for the carvings is that the locals were bored during overly long 16th century sermons!

In the north-west corner of the churchyard is the ruin of a single-cell medieval chapel. This simple structure measures just 3.5m x 4.2m (roughly 12ft x 14ft). The chapel dates to the 13th or 14th century and was used as a school as late as 1735. More self catering near Salthouse

More bed and breakfasts near Salthouse