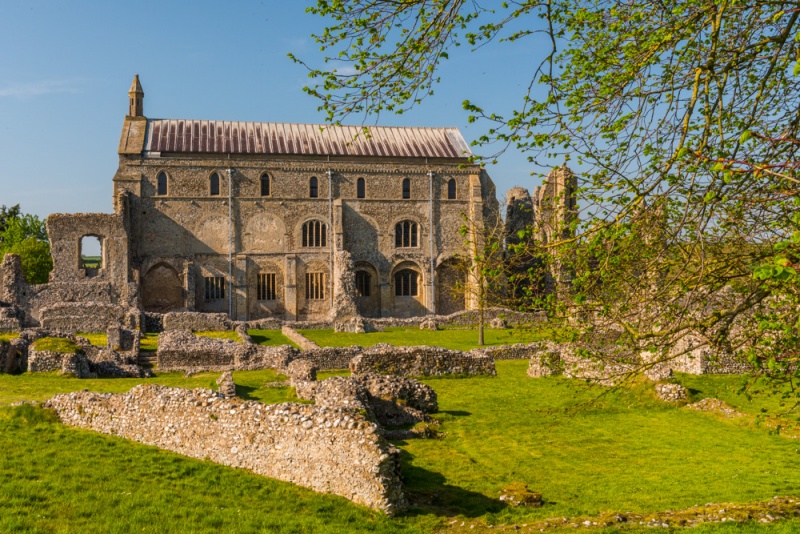 Binham Abbey was founded in the later 11th century as a daughter house of St Albans Abbey, which probably makes it one of the first of the religious foundations established after the Norman Conquest in 1066. There were initially 8 monks under an abbot.

The abbey founders were the Norman couple Pierre de Valognes and his wife Albreda. De Valognes was a nephew of William the Conqueror, and the victorious William was generous in his gifts of land to his nephew.

The abbey was endowed with the entire manor of Binham, so the abbot of Binham Priory was also lord of the manor of Binham. The church at Binham was begun around the year 1090, using a mixture of flint, local limestone, and, later, the famous Caen stone from France.

The building took a very long time, an indication that the abbey was not a very rich one. The west end of the church was not finished until after 1244. Thus you have in one church the rounded early Norman Romanesque style mixed with much later Early English Gothic. 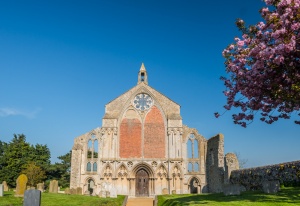 In 1212 Binham was the scene of drama. It seems that abbot of St Albans removed the incumbent abbot of Binham. Robert Fitzwalter forged a document which claimed that only he, Fitzwalter, had the right to name and remove abbots. Fitzwalter besieged the priory, trying to starve the monks into submission.

When King John was informed of the siege he flew into a rage, declaring, 'By God's feet, either I or Fitzwalter must be King of England'. The king sent a force of armed men to relieve the siege of Binham. When Fitzwalter knew the size of the force he faced, he fled.

More drama occurred in the mid-13th century. One Alexander de Langley, former prior of Wymondham, became insane, and given to violent outbursts. He was whipped and kept in solitary confinement until his death, whereupon he was buried in chains in the churchyard.

Binham was suppressed by Henry VIII in May 1539, at which time there only sixf monks in residence. Henry VIII sold the abbey to Thomas Paston. Eventually, all the church buildings were demolished so that the stone could be used for building projects.

Paston's grandson, Edward Paston, began to build a private house near the site of the former refectory. Falling masonry killed one of Paston's workmen, however. This was considered an ill omen, and the workmen refused to continue. Paston moved the site of his house to Appleton. 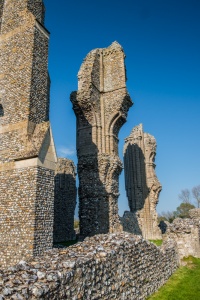 Ruins of the priory buildings

The final seven bays at the west end of the abbey church nave were spared because it served as the parish church. The remaining abbey foundation walls are pretty much all that remain of the original abbey. The outline of the nave arcading is easily visible on the external walls of the current parish church.

The west front may represent the first appearance in England of bar tracery, which was to become the mainstay of Gothic architecture. With bar tracery, the window space is outlined by slender bars of stone, and the amount of glass is greater than the amount of stone.

Contrast this to earlier plate tracery, where a large plate of stone was pierced, creating space for glass. At Binham, the great west window shows the first attempts to implement the more graceful outlines of bar tracery.

The most marvellous part of visiting Binham Abbey is its location in the midst of farm fields. Cows graze in fields outside the old abbey foundation walls, making for a wonderful, timeless scene. The cloister foundation walls are still in evidence.

The abbey is open at any time, and there are guides for sale inside the church. The font is a wonderfully carved octagonal Seven Sacrament type so often found in Norfolk. The pews feature some very fine carvings, and there are a pair of surviving medieval misericords.

The rood screen is a bit of a history time capsule - the original painted screen was overpainted during the English Reformation with text from Cranmer's 1539 Bible. The text is now fading, and the original medieval painted saints are showing through underneath.

I've been to Binham Priory several times, and each time I see something new. Each time I also marvel at the superb craftsmanship of the priory church. Binham is one of those places you can return to again and again and always enjoy.

More self catering near Binham Priory