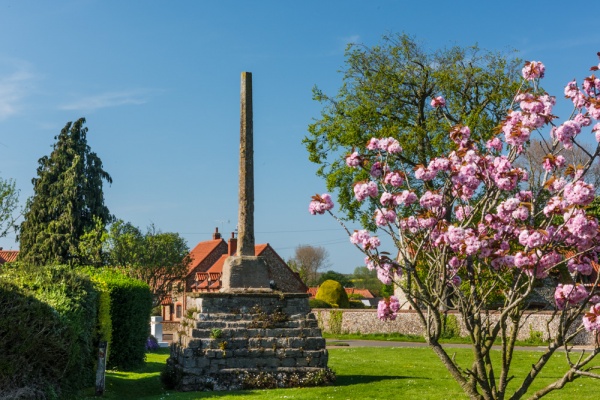 On the wide triangular village green in Binham stands the remains of a 15th-century cross, which marks the site of an annual fair dating back to the 12th century. All that is left of the cross is a striking central shaft, which is set upon a socket stone, which, in turn, is raised upon a stepped plinth.

The cross marks the site of the annual Binham Fair, which was held every year from the 1100s until the 1950s. The cross was probably erected by the monks of Binham Priory after they were granted the right to hold a fair and a weekly market here by Henry I. A short distance from the market cross is Binham Priory, the remains of a wealthy medieval monastery. Part of the old priory church now serves as the Binham parish church.

The cross isn't immediately obvious as you enter Binham, though the priory is well signed. Opposite the pub is a small, triangular green, which I took to be the village green, and there was no sign of a market cross. However, if you go up Back Street, away from the pub, past the petrol station, you come to the actual village green, which is considerably larger and more attractive. The market cross is close to the western edge of the green, wedged in near the back fences of several houses.

Though the cross shaft is essentially plain and unadorned, the stepped plinth is extremely high and very steep, and as a result, is quite eye-catching. Do spare a moment to look at the houses that ring the green; there are several extremely attractive historic buildings, many featuring pantile roofs. 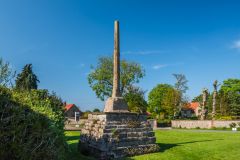