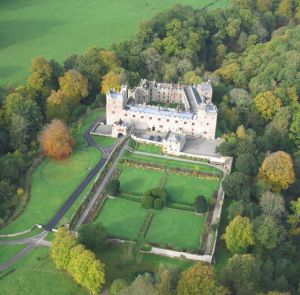 Naworth Castle from the air

On the hillside above Lanercost Priory, close to Hadrian's Wall, lies this Tudor house, the seat of the Howard family, Earls of Carlisle. Evidence of early defences remain, such as the 14th century tower, a testament to the turbulent past of this border region.

Naworth Castle dates to the late 13th century, when a stone keep and bailey enclosure were erected. The first written record comes from 1323, when Ralph de Dacre was granted the right to crenellate.

Naworth was the headquarters of the Lord Wardens of the Marches, tasked with keeping the peace along the notoriously turbulent Scottish border area. One of the Lord Warden's jobs was to deal with Border Reivers, and within the grounds is an old 'hanging tree' where rough justice was dispensed.

Thomas, Lord Dacre, fought at the Battle of Flodden in 1513. In reward he was granted estates around Lanercost, and his new wealth enabled him to extend the medieval castle and add a more comfortable residential block.

A later addition was a walled garden, lad out within the medieval moat in the 18th century. As time went on the Howards spent more time at Castle Howard in Yorkshire, and Naworth was relegated to a second home. Then in 1844 a devastating fire destroyed almost all of the castle. Restoration began in 1850 under architect Anthony Salvin, but the interiors wee the work of the 9th Earl of Carlisle, who counted many of the leading Pre-Raphaelites among his friends, including William Morris and Edward Burne-Jones.

Furnishings are sparse, as much of the Howard treasure resides at Castle Howard in Yorkshire. It must have been more pleasant in 1874, when William Morris called Naworth 'the most poetical [place] in England'.

The largest great hall in the north (78 ft long) is the house's greatest claim to fame. The interior also boasts a priest hole; a secret chamber where the staunchly Catholic Howard family could hide a visiting priest from the authorities at a time when Catholicism was outlawed.

Unfortunately, for all of Naworth Castle's historic appeal, the house is not usually open to the public, though it can be booked for special events such as corporate gatherings and weddings, and you can book self catering accommodation on the estate. Private group tours can be arranged however, which is why we've included it in our listings.

Another way to view, if not visit, Naworth Castle is to take one of the many public footpaths that cross the estate. Several footpaths give excellent views of the castle, and the minor road south from Lanercost goes directly past the castle gates. Hadrian's Wall also traverses the Naworth estates, and so, of course, does the national trail which follows the course of the Wall. 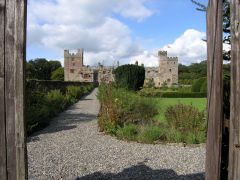 More self catering near Naworth Castle >>