HERITAGE HIGHLIGHTS:   The most westerly significant section of Hadrian's Wall 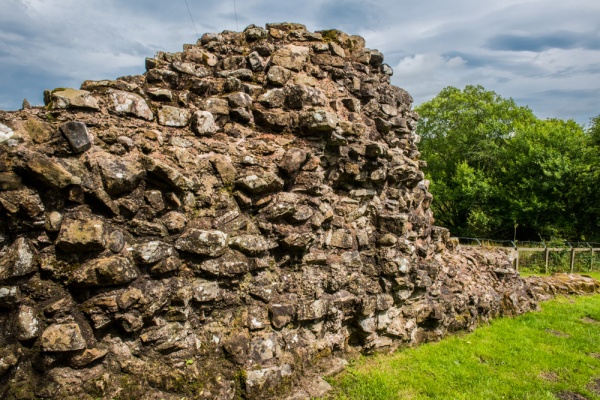 Atop Hare Hill, just west of Banks village, is a short section of Hadrian's Wall, standing to a height of almost nine feet. The core of the wall is original but there has been some later refacing done on the exterior surfaces.

Hare Hill represents the first really significant remains of Hadrian's wall west of Carlisle. Towards Carlisle and the coast remains are scanty, but here the route of the wall and its associated defences become easier to pick out.

This section of wall was for many years considered the highest intact part of the entire length of Hadrian's Wall. It now appears, however, that it was almost entirely rebuilt in the 19th century, or at least the exterior face is Victorian, even if the core is Roman.

In theory access to Hare Hill is easy. I say 'in theory' because its really only easy if you're arriving on foot, following the Hadrian's Wall Path. If you are, just follow the line of the wall and footpath from Banks village for a hundred yards due west and you'll see the high section of wall atop the low hill.

If, however, you are arriving by car, things get tricky. As we discovered to our cost, there is no sign to this section of the Wall from any nearby road, even though Banks Turret, a short distance away, is very well signposted. We followed our satnav to the top of the hill north of Banks, in the direction of Walton Woodhead. It quickly became apparent that we had gone too far so we pulled off the road onto a small layby near some houses marked as Barras Top on our OS map.

It was only after arguing over the OS map for quite some time that we decided to walk back down the hill towards Banks village. That's when we found a signpost, completely hidden by foliage, for the Hadrian's Wall Path. We followed the path up the paved drive towards Hare Hill farm, and a high section of Hadrian's Wall quickly came into view.

According to the English Heritage information panel at the site, there is an inscribed stone set into the north face of the wall, carved with the initials PP. This stone commemorates the building of this section of Hadrian's Wall by Roman soldiers under a Primus Pilus, or chief centurion of a legion. We searched (literally) high and low for this carved stone, but could not find it. The inscription may possibly have been obscured by lichen or simply by weathering of the stone.

Banks Turret is a mile to the east, and is well worth a visit; its a very well preserved fortlet built with turf walls, later rebuilt in stone. Medieval Lanercost Priory is less than a mile away. 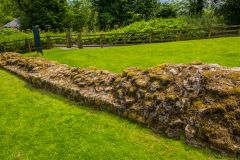 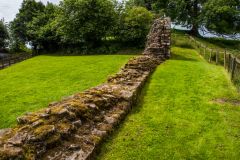 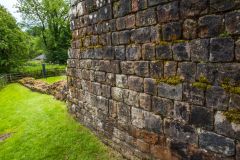