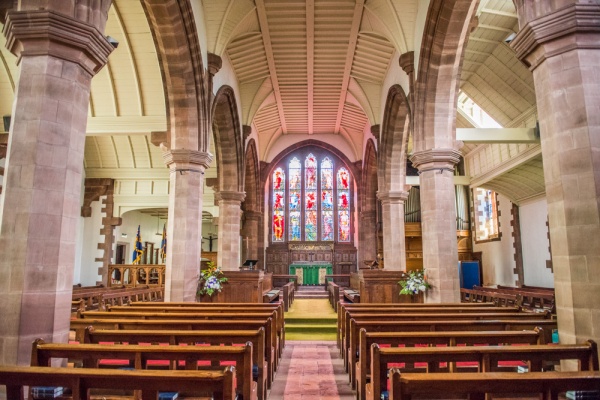 The town of Brampton, Cumbria, was settled by the Angles in the 7th century. The Anglian settlement was a mile north-west of the present town, on the site of a Roman fort. The entire village was forced to move in the 12th century when the local landowner wanted to enclose the area to make a deer park. The villagers moved, but their church did not, and for 600 years the residents of Brampton walked a mile to worship at the Old Church.

In the 1660s the 2nd Earl of Carlisle offered to build a new church in the centre of Brampton, but the vicar showed no enthusiasm for the project. In frustration, the Earl founded almshouses instead. The almshouse was served by a chapel, and that simple chapel was eventually used for most church services. In 1789 a new parish church was built on the site of the almshouse chapel.

By 1878 the church was in poor repair and had little seating for poor people. On the instigation of George Howard, the 8th Earl of Carlisle, and the new vicar, Henry Whitehead, a public meeting was called to discuss building a new church.

It was a contentious issue, for Brampton's merchants felt that a public tramway was a more pressing need, but the Earl had his way and a new church was agreed. The trustees of the Howard estate made it very clear that they would only agree to the scheme if they were allowed to choose the architect. 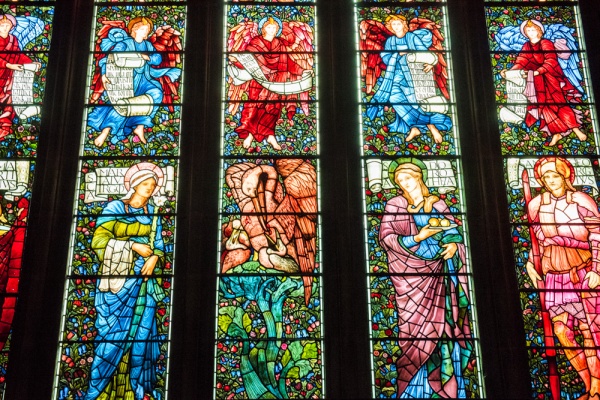 The east window, by Edward Burne-Jones

The new church was designed by Pre-Raphaelite architect Philip Webb. This third version of St Martin's church is Webb's only known church design, and to call it unique and idiosyncratic would not be a stretch.

Webb was called in by Charles Howard, the 8th Earl of Carlisle, and his son George, who would become the 9th Earl. The younger Howard was a patron of Webb and had already employed him to build two houses on the nearby Naworth Castle estate. It is just as well that architect and patron had worked together before, because Webb was not the easiest man to work with; he was known to dismiss clients if they did not allow him free reign and trust his taste without question.

Webb's design was intended to reflect the history of this turbulent area on the Scottish border. The church looks as much like a Border fortress as it does a place of worship, with its castellated appearance and embattled parapets.

In an age when almost all church architecture was in Gothic style, St Martin's is an anomaly. The interior was designed to create a sense of spaciousness, with open-backed pews and a horizontal ceiling painted white to draw your eye towards the east window. 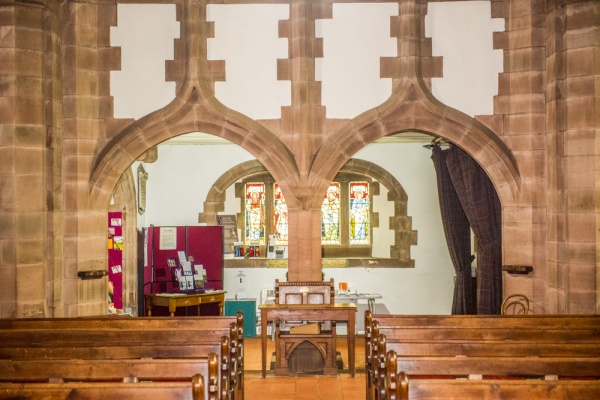 The west end of the church

The interior of the church is almost square rather than the typical elongated rectangle Thee is no distinct chancel and, surprisingly, no pulpit. Instead, there are a pair of clergy stalls in the centre of the church.

With the Howard money behind him, Webb was able to call upon his friends in the Pre-Raphaelite movement, artist Edward Burne-Jones and designer William Morris. Burne-Jones designed an exquisite set of stained glass windows to illuminate the church interior, and the windows were manufactured by Morris.

The total cost of the church was over £7,000, and over half of that total came from the Howard family and their friends. 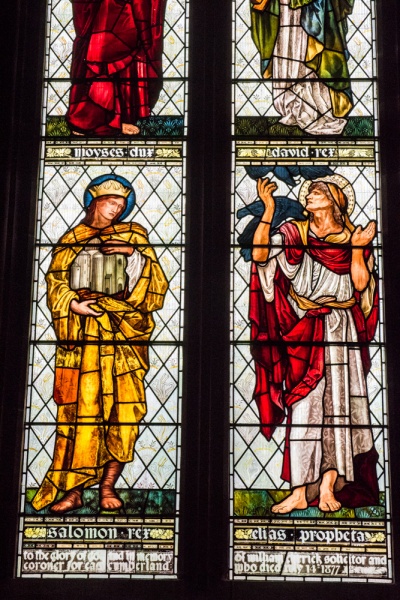 George Howard, Philip Webb, and the vicar of St Martin's, Henry Whitehead, wanted the stained glass windows to create a coherent scheme, every window designed to be part of the whole. The result is stunning; one of the best examples of pre-Raphaelite style and colourful use of imagery in the country. Burne-Jones deigned the scenes, and William Morris chose the colour scheme. Their collaboration created one of the most impressive uses of colour in Victorian architecture.

Most Victorian stained glass focusses on Biblical themes such as the Crucifixion, the Nativity, or the Ascension. Burne-Jones decided to do something totally different in St Martin's church; he wanted to focus on the men and women in the Bible and show scenes from their lives with easily identifiable symbols so that an illiterate worshipper would instantly identify the person and their story.

On the north wall are scenes from the stories of Adam and Eve, Noah, Enoch, Abraham, and Moses. Here you see characters like Solomon holding a model of his temple, and Elijah being fed by ravens. The Evangelists are identified by their symbols; Luke by an ox, Peter by keys, Paul by a sword, and John by an eagle. 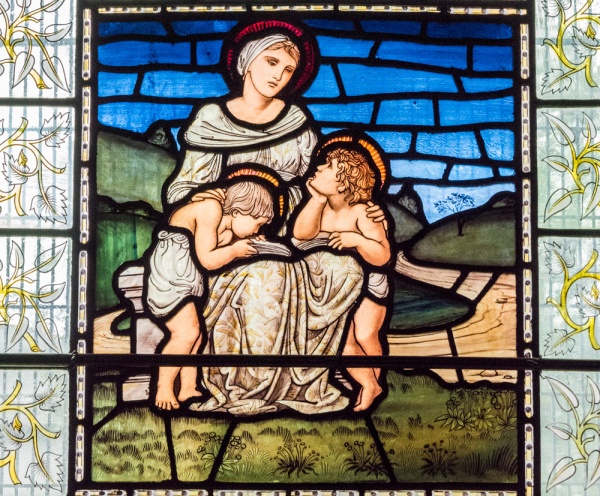 Eunice with the infant Timothy and Mary, by Burne-Jones

Charles Howard died before the church was completed, and the richly coloured east window commemorates his life. The window is divided vertically into five 'lights', or columns, with depictions of Christ flanked by pairs of angels in the top row and St Martin, the Virgin Mary, St Dorothy, and St George flanking a Pelican in Piety on the bottom row. The saints Dorothy, George, and the Virgin Mary were selected because all three names were common in the Howard family.

The south wall features a window representing the virtues of faith, hope, snd charity. The middle window commemorates Bessie Howard, daughter of George and Rosalind, who died tragically at just 4 months of age.

In the south-west corner is a window given by the children of the parish, representing Samuel going to Eli. In the west wall is the 'Paradise Window', acting as a memorial to Henry Whitehead, and by the church entrance is a window depicting the Old Testament prophets Daniel, Jeremiah, Ezekiel, and Isaiah.

Curiously, Webb's original church did not have a tower. The present tower was only added in 1906 after Henry Whitehead's widow offered to give 500 pounds towards its cost as a memorial to her husband.

By this time Webb was retired, but he provided detailed plans for the tower, to be built by his former assistant George Jack. How detailed? The plans were so exact that every nail was shown. When the builder John Laing, expressed surprise at the level of detail, George Jack replied, 'You are building not just for the first thousand years'.

The result is a sumptuous display of Pre-Raphaelite design, and one of the most intriguing Victorian churches in England. The church is normally open daylight hours to visitors and is well worth taking the time to explore. 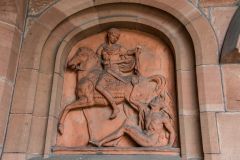 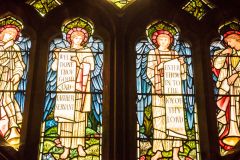