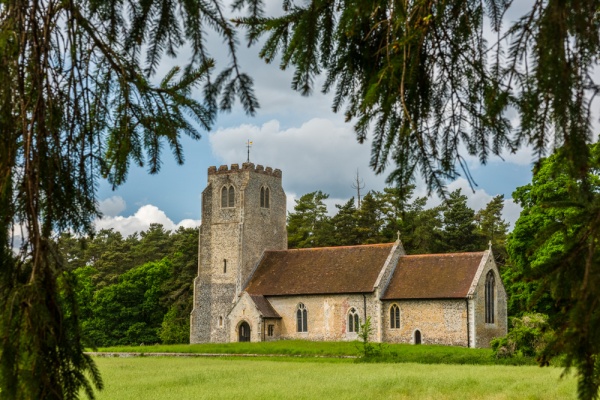 The isolated church at West Harling stands on the verge of Thetford Forest. All Saints is like a little lost child, hiding from its fellows in a forgotten corner of the countryside. Flights of fancy aside, this is a lovely old church, with a nave, chancel, south porch, and very nice west tower. 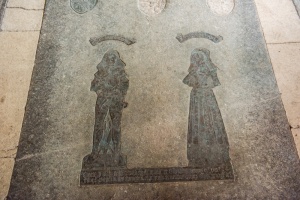 The building is constructed from a rather attractive mixture of stone, brick, and flint. It is primarily a 13th-century building, though the tower is 14th century, and there was some rebuilding in the 15th century. There are some very nice carved heads on the exterior, under the eaves.

The interior is plainly furnished, but there are some wonderful historic treasures preserved, including a collection of late 15th-century memorial brasses to members of the local Berdewell family.

There is also a memorial to a priest, blessed with the delightfully appropriate name of Ralph Folloflove (d. 1479). Beside Rev. Folloflove is a brass to Sir William Beredewell (d. 1508) and his wife Margaret. In front of the chancel arch is another brass to a Berdewell couple; Sir William and Lady Elizabeth, who died around 1490.

At the east end of the nave, behind a squire's pew built for the Nugent family is a piscina built around 1330. It was moved here from the Lady Chapel when that chapel was pulled down in 1733.

Over the south chancel door is a memorial bust of Richard Gipps (d. 1890) by the eminent London sculptor Joseph Wilton. The sedilia against the south wall still has traces of 13th-century paint on its back wall. You can make out red lines with black fleur-de-lys within.

The most interesting historic feature in the church is the 16th-century carved panels in the reredos. The panels are contained within a much newer oak frame, but the carvings themselves are at least 450 years old. The central panel depicts Christ being questioned by the high priests, while the four outer panels show scenes from Christ's birth with captions in Flemish. Above the reredos is the striking east window, with richly coloured Victorian glass containing inserts of medieval glass pieces.

The stained glass is well worth noting; though some is Victorian, there is some very nice late 15th-century work. Some of the glass seems to have been haphazardly assembled, like pieces of a jigsaw puzzle put back together without due care, so that the head of one saint is on the body of another.

The hammer-beam roof in the nave dates to 1902 and the benches to 1890. There is a finely carved octagonal font with eight carvings of human heads supporting the font bowl. Near the font is a 14th century stone coffin found in the Lady Chapel. Also near the font is a medieval iron-bound chest and a rather amazing gilt mahogany table looking terribly out of place in an isolated medieval church. The table looks as if it belongs in the entrance hall of a stately home. 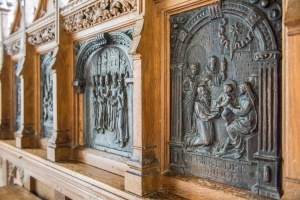 The history of West Harling goes back to at least the 11th century. All three Harlings were mentioned in the Domesday Book, though the first record of churches does not come until the 13th century.

The first mention of All Saints comes from 1254. The nave and chancel date to this period, while the tower was added in the 14th century and the south porch in the 15th century.

East Harling continued to thrive, and today is a sizeable village, but West Harling's population dwindled and today the church has only a few houses for neighbours. It was declared redundant in 1977 and placed in the care of the Churches Conservation Trust. It is normally open daily.

The nearby village of East Harling has one of the finest parish churches in Norfolk, so don't visit All Saints without making time to see St Peter and St Paul there.

Finding the church is not easy. If you rely on your satnav, as I did, you will end up on absurdly minor tracks in the middle of West Harling Heath forest plantation. The church is really only accessible on foot, off the minor road that leads from East Harling to the hamlet of Middle Harling. Just past Middle Harling, heading west, the road takes a sharp left.

A private drive to Berdewell Farm runs straight ahead, through obvious entrance gates. Park along the verge and follow the footpath that runs along the drive. The path will veer left through a stand of trees, and you will emerge into the open again to see the church across a farm field. From the entrance gates, it will take 10 minutes to reach the church. A good OS map definitely helps!

When you realise how awkward access is it is no wonder the church is usually open. Those who make the effort to reach All Saints are rewarded by a lovely historic building, full of interest. The Berdewell brasses are excellent, as is the 16th-century reredos. The reredos carving is so good that I at first took it to be Victorian. 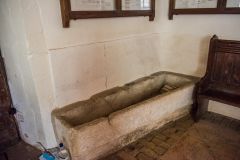 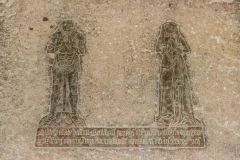 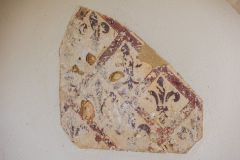 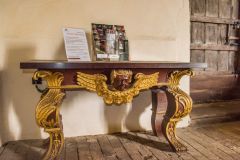 More self catering near West Harling, All Saints Church >>

More bed and breakfasts near West Harling, All Saints Church >>