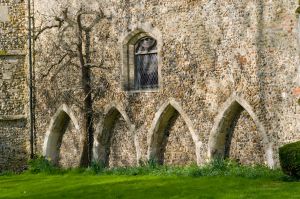 Clare Priory was the first monastic house established by the Augustinian order in Britain. The priory was established in 1248 under the patronage of Richard de Clare. The priory was dissolved by Henry VIII in 1538, but several of the buildings survived largely intact.

In 1953 the priory was purchased by the Augustinians once more, and today it acts as a religious centre and retreat. Visitors are welcome to explore the gardens and grounds.

At the centre of the priory is a 14th-century house, around which can be found remnants of the original abbey buildings. Several prominent members of the nobility were buried at Clare Priory, including Joan of Acre, Countess of Gloucester and Hertford (d. 1307).

Joan's story is a fascinating one; she was a daughter of Edward I and Eleanor of Castile. She was first married to Gilbert de Clare, Earl of Hertford, who was almost 30 years older. When the earl died, Joan secretly married Ralph de Monthermer, 1st Baron Monthermer, a man very much her social inferior.

Joan's enraged father had Monthermer thrown in gaol, and Joan had to plead for his life. Edward finally relented, and the two were reunited. They had four children together until Joan died in childbirth in 1307 and was buried at Clare Priory.

Near the priory is Clare Castle, a ruined medieval fortress.

More self catering near Clare Priory >>