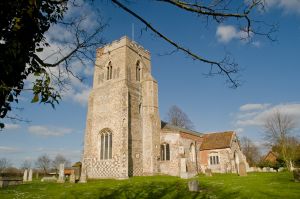 The parish church of St Peter and St Paul at Kedington is a delightful mishmash of styles and periods, a real hotch-potch of history jumbled together into an exceptionally pleasing whole. The low, thatched nave gives way to a flat-roofed chancel with rendered walls that looks for all the world as if its builders had forgotten the top bit of their plans.

The sturdy west tower has an external stair turret and a most unusual octagonal clock at the apex of an earlier medieval roofline. The clock was made in Braintree in 1729 and has only one hand.

The tower was built by John de None around 1300, a fact recalled by a canopied niche to his wife on the south-west buttress. The body of the church is 13th-15th century, though the site is much older, as evidenced by Roman pavement under the nave and Norman stonework throughout.

The pew is guarded by walls made up of painted panels from a medieval chantry screen. The panels are still brightly painted despite their age, showing off angels, saints, and creatures like dragons, lions, and eagles. The pew dates to 1610 but the screen panels are much older, roughly dating to 1430. Behind the Barnardiston pew is the Lady Chapel.

The style and complexity of the Barnardiston monuments at Kedington have been favourably compared with those at Westminster Abbey. High praise, but not hard to believe when you see the monuments for yourself.

There are over 20 Barnardiston monuments in various shapes, sizes, and architectural styles, but perhaps the finest of them is an altar tomb to Sir Thomas Barnardiston (d. 1610). Sir Thomas's two wives kneel at prayer desks within arched recesses, above a recumbent effigy of the knight.

Hovering over the west end of the nave is a semi-circular gallery dating to 1750, and facing it at the east end of the nave is an imposing triple-decker pulpit with a huge sounding board. Beside the pulpit is a stand with an iron cage for holding an hour-glass to time sermons, and an intriguing 'wig-pole'.

The chancel arch is Norman, about 1140, and there is a small piscina of a similar age. Other historic features include an iron-bound parish chest, dated to 1540, and an unusual folding chancel screen dated to 1619. The font and the rear pews are 15th century, and in the chancel is a complete set of Laudian altar rails.

Halfway up the nave are a set of trap doors which, when lifted, reveal Roman pavement, thought to be the foundations of a Roman villa.

While all these historic features are fascinating, the greatest treasure at Kedington is still to come; on the window ledge behind the high altar is a small 9th century Saxon cross. This cross once stood in the churchyard and was moved under cover to protect it from the elements. The side facing you depicts Christ on the cross, and though the carving is somewhat worn, as you might expect for something of such great age, the quality of the craftsmanship shines through.

Whew! This brief overview has only scratched the surface. There is so much to see and enjoy at Kedington. It is one of the least-restored and most enjoyable historic churches in Suffolk, and an absolute delight to visit.