HERITAGE HIGHLIGHTS:   15th-century brass lectern given by Elizabeth I 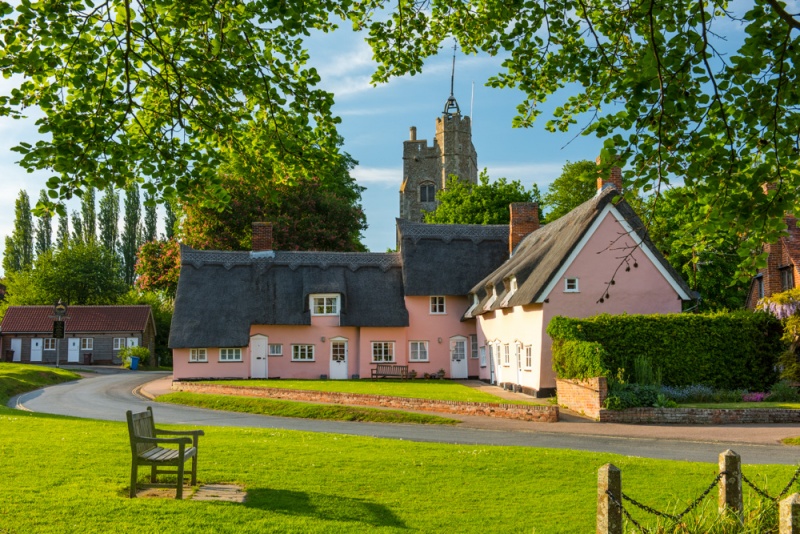 The Suffolk village of Cavendish is one of the prettiest in England and regularly appears in scenic calendars. One of the classic views of Cavendish takes in the broad village green, with thatched cottages on both sides, and the 13th-century tower of St Mary's church rising above them.

We know that there was a Saxon church here, for the Domesday Book of 1086 mentions it. The present church is mostly a product of the 14th and 15th centuries, with some minor alterations in the Victorian period.

The oldest parts of St Mary's are the tower, porch, and base of the aisles, which were all built around 1300. The tower incorporates a vaulted chamber at ground level with a parvise, or priest's chamber above, furnished with a fireplace and window surround. The aisles were rebuilt around 1350, when large new windows were inserted in the walls. 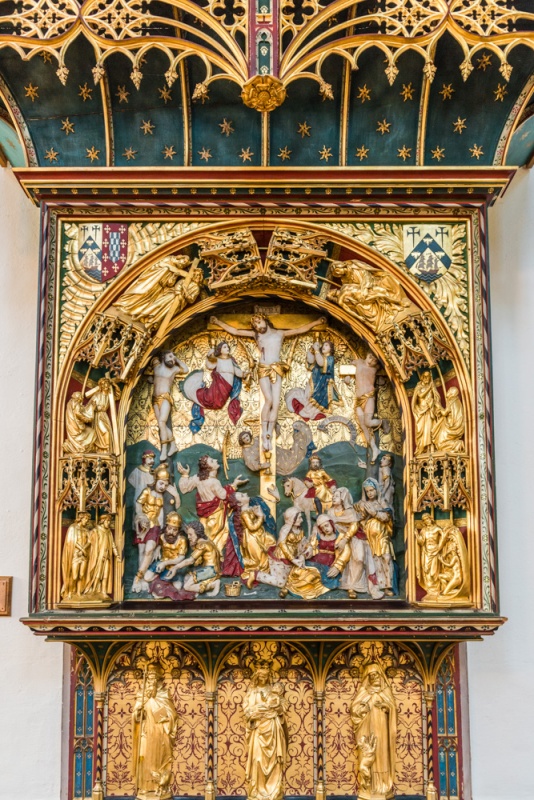 The chancel was rebuilt in 1385 with the aid of a legacy from Sir John Cavendish, Lord Chief Justice of the King's Bench. Sir John, a distant ancestor of Elizabeth II, quite literally lost his head during the Peasant's Revolt of 1381.

The tragic story of Sir John's death began in London, when the leader of the revolt, Wat Tyler, met with King Richard II at Mile End to present the peasant's demands. In circumstances that remain a mystery, the belligerent Tyler was struck in the neck by the Lord Mayor of London. The blow only wounded Tyler, but John Cavendish, the second son of Sir John, stepped in quickly and finished Tyler off.

When the news reached Suffolk, the local peasant's angrily pursued SirJohn. He managed to reach the door to St Mary's church and grasped the sanctuary ring, which, according to legal custom, should have given him protection from the mob. Unfortunately for Sir John, the peasant's ignored the sanctuary custom, and hauled him away from the church. He was taken to the market place in Bury St Edmunds and beheaded by a mob led by Jack Straw.

The 600-year-old door we see today still has its original ironwork, including the handle so vainly grasped by Sir John Cavendish. 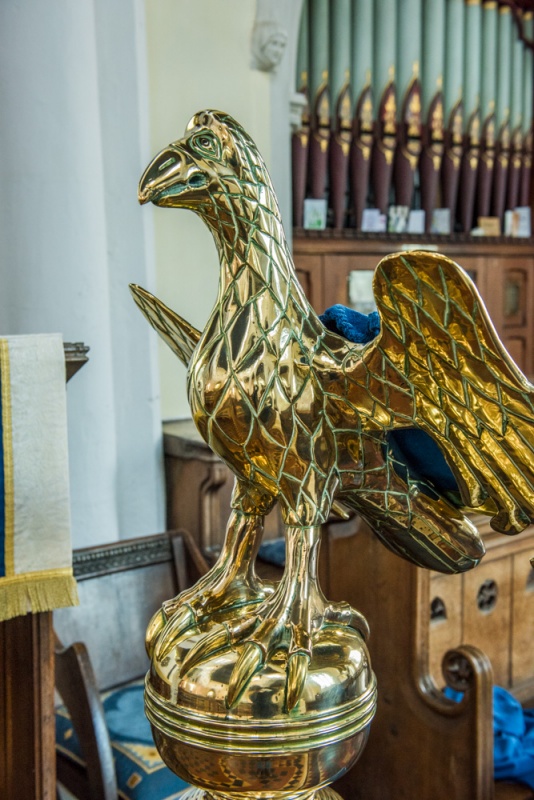 The 15th-century lectern, a gift from Elizabeth I?

The north aisle was rebuilt in 1425, and the nave and clerestory in 1485. The church then remained essentially unaltered until a restoration in 1862.

One of the main historic highlights inside the church is a stunning 16th-century Flemish reredos behind the altar. The central scene depicts the Crucifixion and is set in a gilded frame designed by Sir Ninian Comper. The reredos came from the home of Athelstan Riley, one of those responsible for compiling the English Hymnal.

In the south aisle is a 14th-century octagonal font with symbols of the Evangelists carved around the bowl. At the east end of the south aisle is an altar tomb to Sir George Colt, who died in 1570. The tomb stands on the site of an altar for a medieval chantry chapel, perhaps established by a local merchant guild. On the top of the tomb is a scratched playing board for Alqerque, a form of the popular Nine Men's Morris game.

On the south aisle wall is a plaque commemorating Sue Ryder, who established the charitable foundation that bears her name. The first Sue Ryder care home was established at Ryder's mother's home in Cavendish. She later married Leonard Cheshire, and founder of the Cheshire Homes, and the couple were long-time residents of Cavendish.

There are several very good grave slabs set into the floor, including one to Elizabeth Grey, daughter of the parish rector, who 'quietly departed this life in the full assurance of eternal life' in 1677. Another highlight is a worn 14th-century chest with a traceried front. The altar table is 17th century, as is a beautifully carved chair in the sanctuary.

There are several very good fragments of stained glass in the aisle windows, but perhaps the most interesting historic object in the church is a magnificent 15th-century brass eagle lectern. Tradition says that the lectern was given to the church by Elizabeth I on one of her royal progresses through Suffolk.

St Mary's is a marvellous medieval building, set in one of the prettiest villages in England. It is an absolute delight to visit. 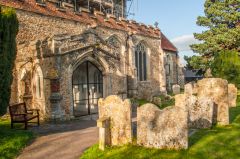 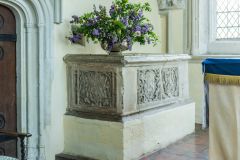 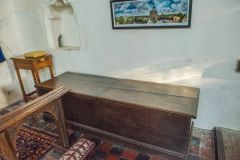 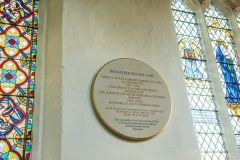