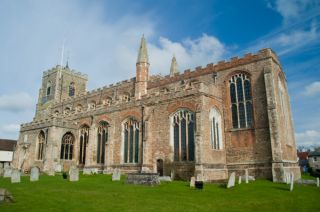 Ranked as one of England's Thousand Best churches, St Peter and St Paul is a glorious example of medieval Gothic architecture and a testament to the wealth generated by sheep farming in this area during the medieval period. The church is large, almost disproportionately so in relation to the pleasant village of Clare that surrounds it.

The church was built sometime shortly after the Norman conquest, but the nave and chancel are later, 15th century, rebuildings. The nave arcading is 13th century, as is the lovely west tower. The beautifully carved south porch dates to about 1380, as does the chapel.

Bits of a 15th-century rood screen remain, but only remnants of original stained glass remain; the rest was destroyed by the reform zealot William Dowsing and his followers in 1643.

More self catering near Clare, St Peter and St Paul >>

The Crown Inn Hotel & Restaurant is a family-run freehouse where you are guaranteed a warm welcome an indulgent seasonal menu and a good night's sleep. more >>