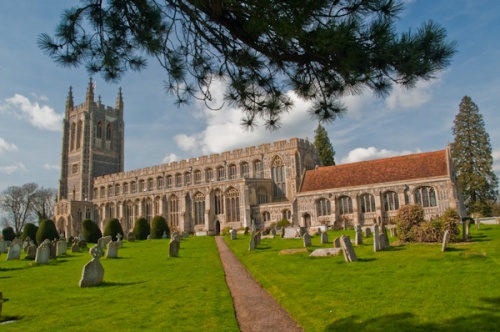 Holy Trinity church in the pretty village of Long Melford is one of the great medieval churches of East Anglia, a testament to the wealth of Suffolk during the heyday of the wool trade in the late Middle Ages. This Grade I listed church was built almost completely during the 15th century, at a time of great prosperity for local cloth merchants.

Five bays at the west end are likely 14th century, but the remainder of the church was finished in 1484, though the famous Lady Chapel took another dozen years to complete. The striking west tower, however, was built in 1903 to a design by G F Bodley.

It replaces an unloved 18th-century brick tower, though in a style that marches so well the original medieval architecture that you would never know it is of more recent vintage. It was begun to coincide with Queen Victoria's Diamond Jubilee and is built around the original medieval tower, destroyed by lightning in 1710.

Holy Trinity retains much of its original stained glass, and as a whole, the Long Melford glass must be considered one of the finest collections in England. The glass is attributed to the Norwich School of glass making and dates to the latter half of the 15th century.

It is a marvel that so much of the glass survived the attention of 16th-century Reformers and the Puritan zeal of the Civil War years. Much of the medieval glass was originally used in clerestory windows, so perhaps the reformers simply found it too hard to reach? After several moves, the medieval glass was eventually inserted in the first 8 windows on the north aisle wall.

When you see Holy Trinity stretching across the sloping hillside you begin to get some idea of just how imposing this building was built to be. That impression is emphasized when you walk into the spacious and light interior; this place is huge, measuring 250 feet from end to end. The nave and chancel have a wonderful timber roof with moulded ridge beams.

On the north side of the nave is a small relief carving of the Adoration of the Magi, dated to 1350. It was discovered under the chancel floor during the 18th century and may be part of a larger altarpiece destroyed at the Reformation. The carving is quite wonderfully whimsical, with a pair of cows looking under Mary's bed and a midwife plumping her pillows.

To the north of the chancel is the Clopton chapel, with memorial brasses to Clopton family members ranging from the 15th-16th centuries. On the east side of the chapel, a doorway leads to a separate Clopton Chantry, containing the Purbeck marble tomb of John Clopton (d. 1497). The Clopton Chantry is known for its painted inscriptions, which run around the chamber at roof height.

Back in the main body of the church, one of the highlights is the tomb of Sir William Cordell (d. 1581). Cordell served as Master of the Rolls to Elizabeth I. The tomb was sculpted by Cornelius Cure, master mason to the crown.

On the south side of the chancel is a quite marvellous collection of Clopton brasses, including that of Sir William (d. 1446). Nearby are a series of equally impressive brasses to the Martyn family. Among the Martyn brasses are two 'Chrism' brasses, showing infants in their christening robes.

This type of brass is extremely rare, and show that the babies died before their mother was 'churched'. Note another of the Martyn brasses showing a girl carrying a skull, showing that she died before her parents. 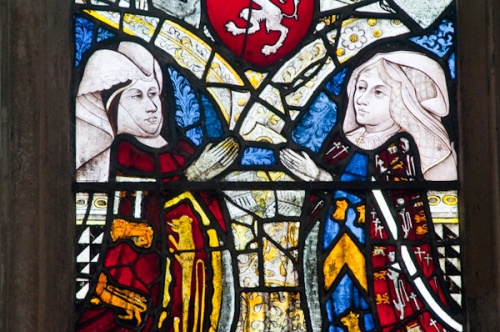 There is a wonderful altar tomb to Sir William Clopton, father of the Sir John responsible for building the church. This tomb is the scene of an annual ceremony that goes back to 1436. In that year, Sir William Clopton granted the town of Hadleigh a guildhall and land for a market.

The rent for Sir William's largesse was set at one red rose annually. Each year the Mayor of Hadleigh duly places a red rose on Sir William's tomb. This 'rose rent' is thought to be the oldest rent still paid anywhere in Britain. (When I visited, a fresh red rose lay atop the clasped hands of Sir William's effigy. The rent must have been paid as due!).

One of the highlights of Holy Trinity - and perhaps of Suffolk churches as a whole - is the Lady Chapel, which was added to the east end of the church by the Clopton family of Kentwell Hall in 1496. The chapel is completely separate from the main building and has its own entrance.

Though separate Lady Chapels were common in monastic churches, Long Melford is one of the very few parish churches that was never an abbey to have a separate lady chapel.

The interior is very unusual in an English parish church, with a central shrine surrounded by an ambulatory. Look up as you pass around the ambulatory and you will see some wonderfully carved beams and roof joists. At the rear of the Lady Chapel is an odd sight; a multiplication table hangs upon the wall, a reminder that the chapel was used as the village school from 1670 until the 19th century.

Holy Trinity is a superb building, and certainly deserves its reputation as one of the finest historic churches in England. It is usually open to visitors during daylight hours (10 am - 6 pm when I visited). 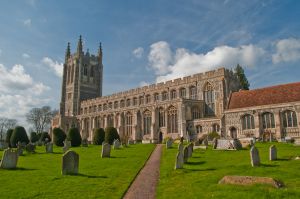