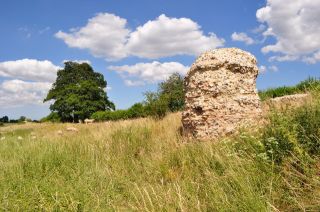 Venta Icenorum
Venta Icenorum was a Roman civitas, or administrative centre, built around AD 70, following the failure of Boudicca's revolt. It served as the capital of the Boudicca's Iceni tribe, the most powerful of the native British tribes in East Anglia. Loosely translated, the name Venta Icenorum means 'market-place of the Iceni'.

The site was gradually expanded over the years, with the addition of a forum, basilica, and baths, and town walls. Venta Icenorum was occupied until roughly AD 400.

Venta Icenorum is situated on gently sloping ground on the north bank of the River Tas, and the site covers about 12 hectares. Medieval St Edmund's church is situated in one corner of the enclosure.

There are two Romano-British temples in the centre of the site, and another temple about 1/2 mile to the east. The best-preserved part of the site is the town wall, which stands to a remarkable 20 feet high on the north.

Objects found during excavations at Venta Icenorum can be seen at Norwich Castle Museum. The site is owned and operated by the Norfolk Archaeological Trust.

More self catering near Venta Icenorum >>