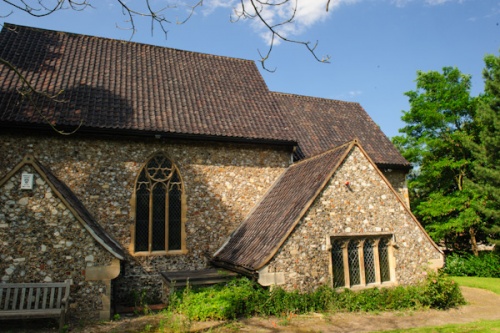 St Julian's is one of the oldest churches in the city of Norwich. A surviving Romanesque door and several small occuli (rounded windows) suggest an Anglo-Norman church.

Julian (1342-1413) was a 14th-century mystic, an anchoress, or female hermit, who lived in a small cell attached to St Julian's church, next to one of the busiest roads in medieval Norwich. Strangely, we do not know her real name; she is only known by her association with the church of St Julian.

In truth, we do not know much of anything about her, except that she almost certainly was not a nun, but a lay person who chose a life of contemplation. She was also not the first person to use the anchorite cell attached to St Julian's church; it was used before her time and again after her death. 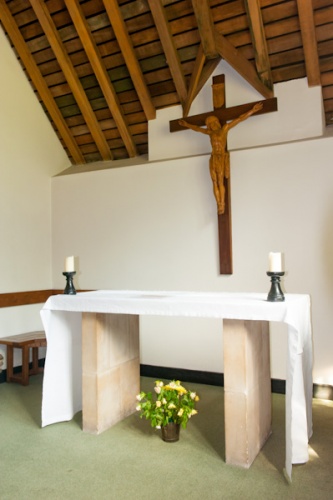 Julian is remembered at Norwich Cathedral with a statue on the west front and a pair of stained glass windows. One of the windows, in the Bauchon Chapel, portrays her as a Benedictine nun, which she was not. She is often called a saint as well, and she's not that either!

Anchoresses could not leave their cells; essentially they were walled in, so the decision to become an anchorite or anchoress was a serious one, and required a lifetime of dedication and commitment.

Because of that dedication, people often came to anchoresses for counsel, believing them to be wise or holy people. one visitor to 'Julian' was Margery Kempe (c.1373 – c.1438), who later dictated The Book of Margery Kempe, considered the first autobiography in English. This book detailed Kempe's numerous pilgrimages, and it is partly through this that we know so much about St Julian and her life.

On 8 May 1373, the anchoress Julian was struck by a severe illness which left her close to death. During the illness, she had 16 visions, visions which she was moved to write down after her recovery. These writings took 20 years to complete, and are recorded in two stages. Immediately after her visions, Julian wrote down a brief account. One can imagine her quickly scribbling down details of her impressions before she could forget them. 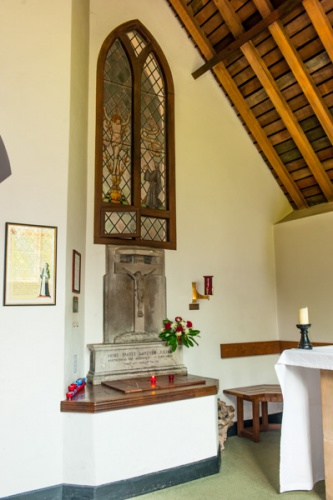 Then, after taking time to meditate on the visions, Julian began to write out a much longer, more detailed account, called The Long Text. This was sometime after 1393. Julian's visions became Revelations of Divine Love, the first book written by a woman in English, and a spiritual classic even today.

Unlike many religious teachings of her day, Julian did not write of a vengeful or judgemental God, but a God with an all-enveloping love, like a tender mother or father.

This message of Divine Love ran counter to many religious teachings both at that time and since, but the simple, clear way she expressed her ideas continue to find an audience today, and her writings have been published in a multitude of languages and remain in print today. 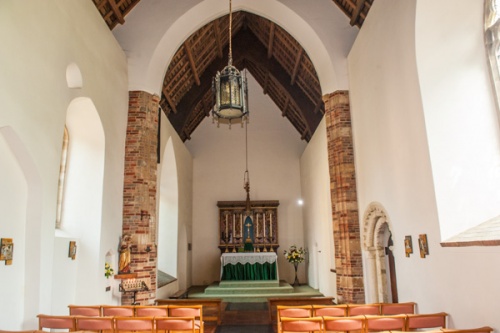 Julian's hermitage was torn down at the Reformation, but after the church was hit by a bomb in WWII, the cell was rebuilt along with the very simple nave and chancel of the main church. Excavations uncovered what was thought to be the original foundations of the sanctuary and St Julian's cell.

The church was rebuilt using the original materials, so that it is essentially the 'same' medieval church, just reordered. Norwich did not really need another parish church; it has plenty to spare, but the church was rebuilt in part to act as a focus for the shrine of Lady Julian of Norwich. The north wall of the nave is largely original, with several small round windows suggesting a construction date sometime in the late 11th century.

Just one footnote to the rebuilding story; there is actually no firm evidence that the foundations discovered on the south side of the church were those of Julian's cell. It would have been much more common for an anchoress cell to be built on the north side of the church. 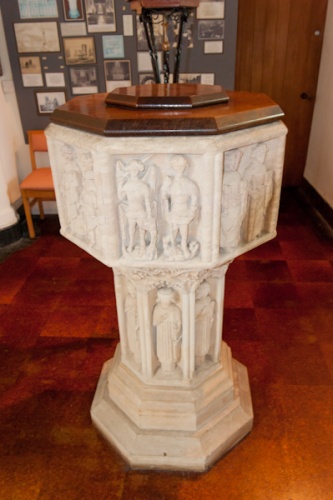 From the nave, a Romanesque doorway leads down a few steps to the hermitage, where you will find a separate altar and a small shrine against the north wall. This is, as closely as we can tell, where the original cell connected with the church. The best historic features inside the church are a 15th-century octagonal font, brought here from All Saints church in the city centre after the original 15th-century font was destroyed in the bombing.

Another historic feature is the Romanesque doorway, which has very nicely carved capitals, though rather worn with age. But most people don't come here for the architecture, though it is interesting, but for the connection with Julian. 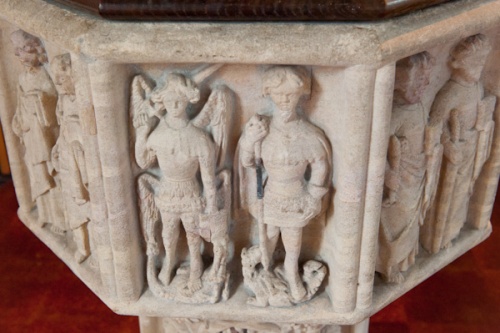 St Julian's is not the easiest place to find! The church is on a small lane called St Julian's Alley, off KingStreet and Rouen Road, south-east of the city centre, about a 10-minute walk from the castle. The church is just around the corner from Dragon Hall on King Street. There is a paid car park opposite the Julian Centre on Rouen road.

It is not immediately obvious that you can walk around the exterior of the church and see Julian's cell from the exterior. But immediately to the left (east) of the entrance porch is a wooden door in a high fence.

This gate, as I discovered, is normally unlocked during the day, and gives access to a quiet churchyard, more like a small garden, where a bench has been set so you can enjoy the birds and butterflies flitting about. This small area bends around the south side of the church and you can examine the exterior of Julian's cell. 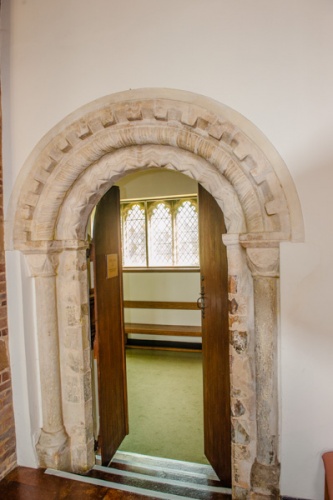 Romanesque door to the cell

It is not often that I visit a historic site and am moved to simply sit and soak in the surroundings. Julian's cell is such a place. The cell was empty when I visited, and as soon as I stepped inside it was as if the noise of the city outside disappeared.

It is a place to contemplate, and sit quietly, to enjoy the stillness and sense of peace. If you are bent on simply seeing a historic attraction, St Julian's will not take long to see, but if you want to truly experience it, set aside a few minutes to just sit and enjoy the stillness.

Nearest Accommodation to Church of St Julian and Shrine:

More self catering near Church of St Julian and Shrine

More Hotels near Church of St Julian and Shrine

More bed and breakfasts near Church of St Julian and Shrine