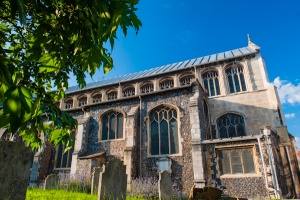 There was a church dedicated to St Stephen just south-west of Norwich Castle since at least the 13th century. The earliest written record we have suggests that a priest of St Stephen's served the inhabitants of the great Norman castle. The lower sections of the tower and the walls date to around 1350 but much of the church we see today is the result of a major 16th-century rebuilding.

The most striking exterior feature is the tower, made with traditional East Anglian flushwork (with pieces of knapped flint set flush with the wall surface). Unusually, the tower is not at the west end of the nave but rises from the north porch.

The interior is graced by a glorious hammerbeam roof (this IS East Anglia after all!). The high 16th-century clerestory windows and the lack of a chancel arch creates a wonderfully spacious and airy interior vista looking east to the large stained glass window behind the high altar. So much light do the sixteen 16th century clerestory windows admit that they have been dubbed 'The Tudor Lantern'.

The east window gathers together the only fragments of medieval glass to survive the 'Greate Blowe' of 1648 when a nearby Civil War powder magazine exploded. The background to the explosion is fascinating; the mayor of Norwich at that time was John Utting, a staunch Royalist who rebuffed reforms of the church and government put forward by Parliament.

The Sheriff of Norwich complained to Parliament and despite a counter-petition, by his supporters, a Roundhead official was sent to Norwich to take Utting into custody.

His supporters rioted against the arrest and stormed Committee House (on modern Bethel Street) looking for firearms. What they found instead was a store of gunpowder, and this gunpowder was accidentally ignited during the attack. The Committee House was destroyed, and the explosion shattered the windows of churches for several miles around. 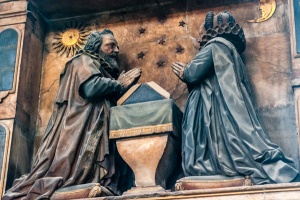 One of the most appealing features of St Stephens is a large number of memorial slabs and wall tablets to survive. The sheer number and quality of the monuments give you some idea of just how prosperous the city was during the late medieval period and on into the 16th and 17th centuries. Perhaps the finest of these monuments is a tablet to John Mingay (1556-1625) and his wife Susan (1642). Mingay was a wealthy apothecary and was elected Sheriff in 1602 and Mayor of Norwich in 1617. Another is to the Mackerell family (over the north doorway).

In the floor of the sanctuary are memorial brasses to the Brasyer family. The Brasyers owned a brass and bell foundry and were perhaps the wealthiest parishioners of St Stephens in the 15th century, when they provided two Mayors of Norwich. On the sanctuary floor is a brass to Dr Cappe (d. c. 1530), the vicar who oversaw the chancel reconstruction. 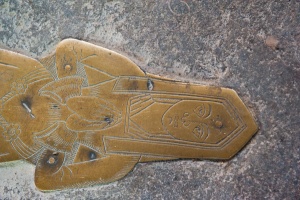 Medieval brass of a woman

Another monument is to Samuel Bignold (1791-1875), who founded the Norwich Union Fire Insurance Society, which eventually evolved to become one of the largest insurance companies in Britain (now known as Aviva). Bignold's ornate house on Surrey Street (now Surrey House) began as a private dwelling but is now the headquarters of Norwich Union itself.

The chancel roof is decorated with a dozen carved corbels depicting angels with scrolls. The spandrels of the chancel beams are also beautifully carved. Curiously, the chancel was rebuilt just before the Reformation, and the nave just after (which accounts for the chancel being more highly decorated).

So, St Stephen's is unusual in being both a pre-Reformation and a post-Reformation church. The chancel is my favourite part of the church, with its carved bench ends and wonderful medieval misericord carvings. These include a lion face, a gryphon, a unicorn, and several humorous faces.

The font is 16th century and is topped by a 17th-century cover with a gilded carving of a pelican plucking its own breast.

One thing to note is that the church seems to have quite limited opening times. That's a real shame as it is well worth a visit, and is conveniently located near the city hall and the castle. We were lucky and found an opening time while we were visiting Norwich, but it is well worth checking ahead of time. 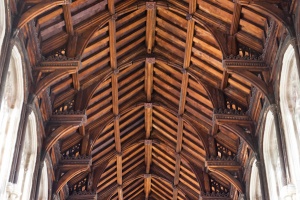 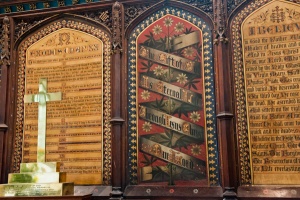 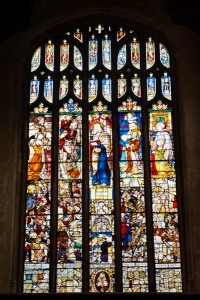 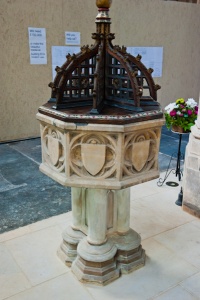 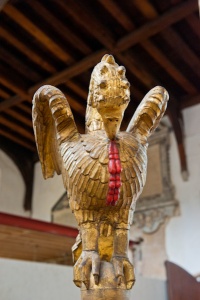 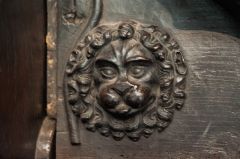 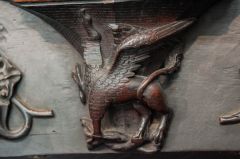 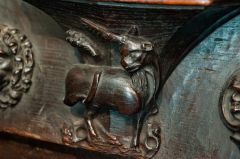 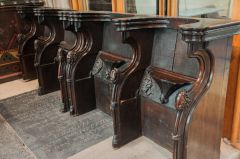