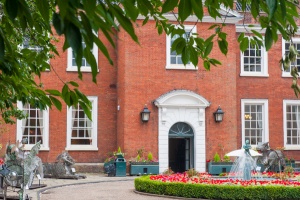 In 1258 John le Brun (John Brown) founded a hospital dedicated to St Mary to the south west of the great Norman castle of Norwich. The full name of the hospital was St Mary Chapel in the Fields, and the name lives on as the Chapelfield district of modern Norwich. A secular college of canons and a church for priests was built at the same time, with a communal hall.

Around 1278 a cloister range and crypt were built. The crypt survives as part of the current cellars.

The college was closed at the Reformation, and the monastic buildings were destroyed. Then in 1609, the property was purchased by the Hobart family, who built a fashionable townhouse on the site, known as Chapel of the Field House. 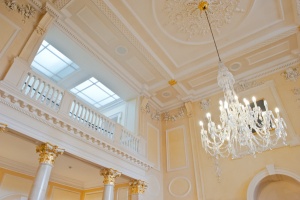 Then in 1754 architect Thomas Ivory designed an elegant new building, with fashionable chambers for society gatherings. Ivory played a leading role in transforming the landscape of Georgian Norwich, designing, among other prominent buildings, the Octagon Chapel (1756), the Theatre Royal (1758). The interiors are a beautiful example of Georgian style, with intricate plasterwork ceilings and wall decoration, wood-panelled walls, with fine furniture and fine art.

Noverre's ancestor was Jean-George Noverre, a famous dancing master at the court of Louis XVI and Marie Antoinette. The ballroom was later used as a cinema, and today it is the largest room in Assembly House. 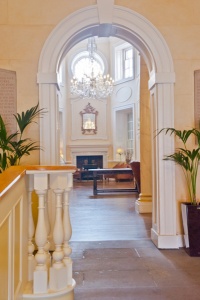 Entrance to the Grand Hall

The 'House of Assemblies' continued to be used for fashionable events over the next 150 years, but by the early 20th century it was showing signs of wear and tear. In 1938 HJ Sexton bought the property intending to restore it. The onset of WWII put back restoration efforts, but finally in 1950 Sexton gave Assembly House to the city of Norwich to be a centre for the arts.

A devastating fire in 1995 damaged the entrance hall and music room but much of the interior furnishings were saved. The house was restored once again and reopened in 1998. Since then it has functioned as a centre for the visual arts and as a setting for exhibitions.

Assembly House is interesting because so little has changed since it was built - despite the recent fire. The rooms appear just as they did in the Regency period and though it can't be compared to a stately home, the interiors are a wonderful example of 18th and 19th-century style. Close your eyes and you can imagine society beauties and beaux whirling around the dance floor or engaging in erudite conversation to the sound of classical music.

Nearest Accommodation to The Assembly House:

More self catering near The Assembly House

More Hotels near The Assembly House

More bed and breakfasts near The Assembly House