HERITAGE HIGHLIGHTS:   Unique trading hall built by one merchant rather than a guild 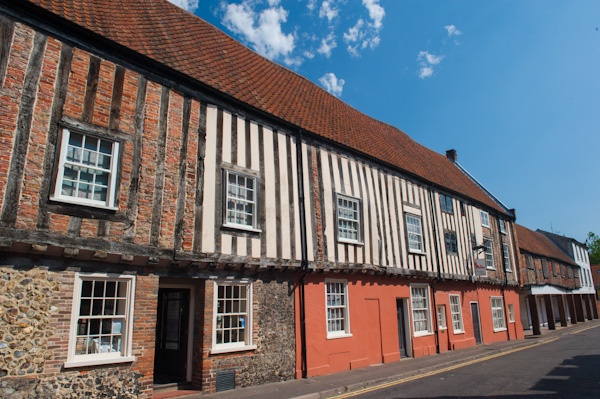 In 1427 a successful Norwich merchant named Robert Toppes built a trading hall close to the River Wensum. The long rectangular building had a timber-framed hall on the first floor, open to a superb crown post roof. One of the roof timbers is carved with the likeness of a dragon, and it is this hand-painted carving that gives the Hall its name.

The Dragon Hall site was in use long before Robert Toppes appeared, though. In the 14th century, part of the site was owned by Woburn Abbey, and there may have been a smokehouse here for preserving herring.

The other half of the site was owned by a merchant named John Page, who maintained a traditional hall house. Around 1330 Page extended his hall with an undercroft for storage, beneath a service block for storing foodstuffs.

The quality of the material used in construction suggests that Page set out to make a splash and impress people with his wealth and status. The basic house was an open hall, with a private solar, or family room, at one end. The open hall layout is preserved today in the Hall's meeting room. 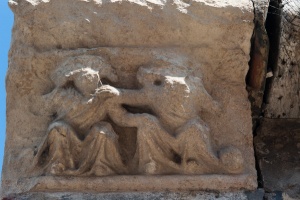 Carving on the corner of the Hall

In the late 14th century the entire site was combined into a single property by the Midday (or possibly the Clere) family. Then Robert Toppes acquired the property and set about constructing his grand new trading hall. Toppes (c.1405-1467) traded across Europe, importing and exporting spices, cloth, pottery, and wool.

He also had real estate holdings and may have been a money-lender as well. He was influential in civic government and was elected 4 times as Lord Mayor of Norwich, and he represented the city in Parliament. He was a member of the Guild of St George, a trade organisation of local merchants. The symbol of the guild was a dragon, and this may account for the dragon carving that gives the Hall its name.

In today's parlance, Toppes was an entrepreneur, and he needed a focal point for his trading activities. 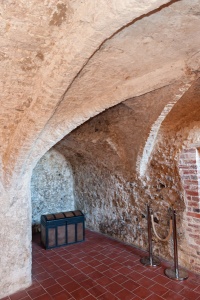 What makes Dragon Hall unique is that it was built by a single person. There were plenty of merchant halls built by guilds and trade groups (for example, the Merchant Adventurers Hall in York), but nowhere in England is there a hall built by one individual. Toppes wanted his Hall to be both a shop and a warehouse, with long-term storage facilities.

The Great Hall was the showpiece of Dragon Hall, built to impress trading partners and buyers. The superb crown-post roof was meant to draw the eye, as were three glazed oriel windows; glazed at a time when glass in a private house was a rarity. On the ground floor and undercroft were storage areas and workspace.

Toppes did not live here; he and his family (2 successive wives, 7 children) lived near the market place at the heart of medieval Norwich. 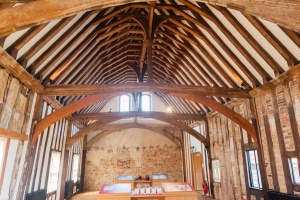 Toppes died in 1467 and was buried in St Peter Mancroft church. In his will, he left a bequest of 3s 4d to every church in Norwich. The fact that Norwich had more churches by area than any place in medieval England gives you an idea of just how wealthy and successful Robert Toppes was.

There were further bequests of 2d to every prisoner in Norwich Guildhall and every leper outside the gates. There was another interesting clause in the will; Dragon Hall was to be sold, and the money used to pay for priests to say mass for the souls of Toppes and his family.

The Hall was set in a crowded area of tenement slums known as Norwich Yards. In the 1930s the civic government cleared the slums, leaving only one cottage in the area behind Dragon Hall. This cottage has now been incorporated into the Dragon Hall complex. The true nature of the building was only rediscovered in the 1980s, since when it has undergone a sensitive restoration to showcase the original 15th-century building.

Parts of the Hall are used to tell the story of Toppes and the bustling commercial life of late medieval Norwich. On the top floor are activity areas, frequently used for events such as weddings, parties, and fairs. The Hall is run by an independent charitable trust.

This truly is a wonderful historic building. The medieval architecture is simply stunning, and the historical displays truly bring the building and the era of Robert Toppes to life.  Dragon Hall is fascinating, and set in an area of the city often overlooked by visitors. Just a few short steps away is the cell of St Julian of Norwich, the medieval mystic and writer (All Shall be Well).

Dragon Hall is currently home to the National Centre for Writing. The Hall is now used for literary events, workshops, and writing courses. The Dragon Hall Heritage Volunteers give guided tours twice a month. There is no need to book. A donation towards maintenance costs is requested.  Find dates and times on the Dragon Hall website. 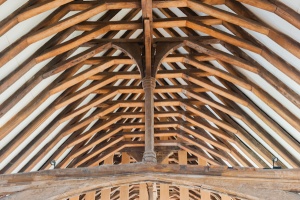 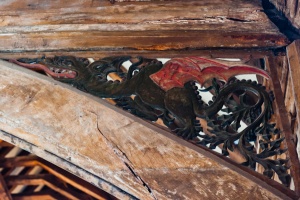 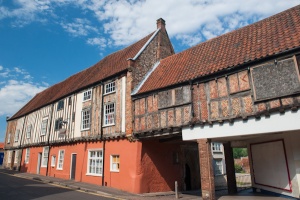 Another view of the Hall 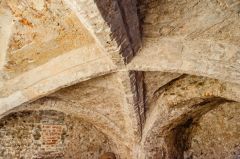 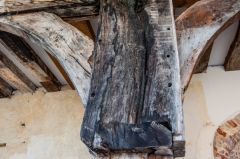 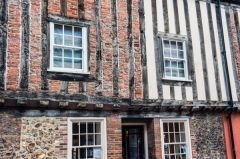 More self catering near Dragon Hall