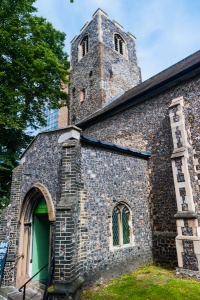 This attractive redundant church dates mostly to the 15th century, though it has been heavily restored. Now surrounded by modern developments, the church operates as a Christian hospitality centre, and is open daily. Though the main body of the church is simply a place to sit, read, or chat, the chancel remains a consecrated chapel. There is a cafe and a small charity shop in the nave.

One of 32 medieval churches still standing in the city, All Saints is located just a few minutes stroll from the castle and market place. Almost within touching distance - or so it seems - is St John's Timberhill. With so many other churches nearby it is no surprise that some have been made redundant, and so it is with All Saints. 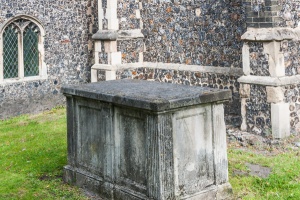 Tomb chest in the churhyard

There is evidence of an even older building in the truncated thick wall near the tower and the outward lean of the nave walls. Most of the nave windows are Perpendicular, and hough the large east window looks like 14th century Decorated Gothic it was actually inserted in the Victorian period.

One of the best historic features belonging to All Saints cannot be found in the church at all. The nicely carved 15th-century font was moved to St Julian's church when All Saints was made redundant.

Among several interesting monuments inside the church is a grave slab to William Clabburn, who was one of the most successful manufacturers of the Norwich shawl. By the servery is a floor slab to Elizabeth Cox (d. 1735). On the north wall is a mural tablet to John Morse (d. 1837). Morse was a successful brewer with as brewery on Surrey Street. He was elected Sheriff and twice named Mayor of Norwich. 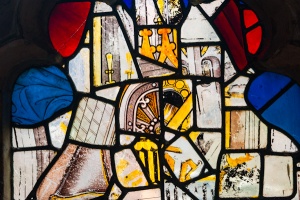 There are small fragments of stained glass gathered in windows throughout the church. One window on the north wall has a figure of St James the Less holding a club, which looks for all the world like a modern hockey stick. In the same window are fragments of a larger Holy Kindred scene. On the south wall is a World War One memorial window designed in 1921 by FC Eden.

Summing Up
All Saints isn't a church you will spend lots of time exploring; the building itself is small, and many of the original furnishings are gone now, but the architecture is enjoyable and the stained glass is worth a look.

UPDATE
We understand that since our visit the hospitality outreach centre that occupied the church for many years has been forced to close. We'll update this page as soon as we know more about opening arrangements for this historic building. 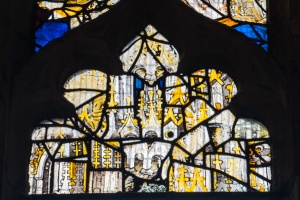 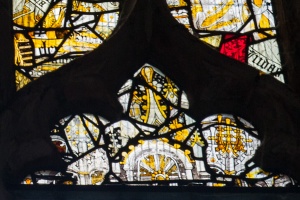 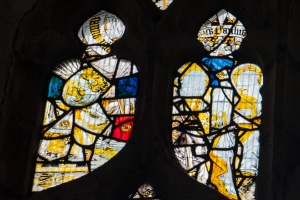 More from the same window

Nearest Accommodation to All Saints Westlegate:

More self catering near All Saints Westlegate

More Hotels near All Saints Westlegate

More bed and breakfasts near All Saints Westlegate