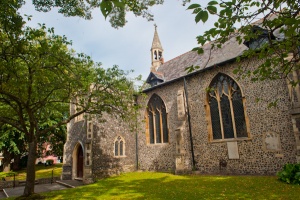 In the medieval period there was a lumber market just outside the bailey enclosing the great Norman castle of Norwich. The church of St John Timberhill takes its name from that market, though today commerce in the area takes place in a plethora of modern shops and cafes.

The church probably existed long before the market, however, for the exterior walls show long-and-short quoins favoured by late-Saxon and early Norman builders. But even if the church has roots to the pre-Norman period, the church we see today is primarily the result of extensive 18th and 19th-century rebuilding. So thorough were the Georgian and Victorian builders that very little of historical interest remains inside the church.

In the 18th century, the nave was filled with box pews, but by the late 19th century the church was in such poor condition that services were held under the west gallery for fear of roof timbers collapsing on the parishioners. In 1871 the vicar, Edward Ram, set about reordering the church to look like it did in the medieval period. 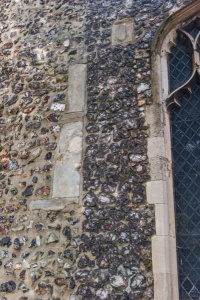 The idea might have been laudable, but Ram had a very Victorian idea of what a medieval church looked like. He replaced the earlier bell-turret with a slender spirelet, and swept away the gallery and box pews.

The Ten Commandment boards had to go, as did the pulpit and reading desk. He inserted a chancel screen and rood loft, with carved and painted figures from Oberammergau. His Bishop informed him that the figures were illegal, but Ram was adamant and refused to remove them. And here they stand today.

The striking reredos is also from Oberammergau, but above the altar is the one remaining medieval feature in the church, a German candelabrum dating to around 1500.

Because of all the rebuilding there are few monuments left in St John's. Among the best is a late Georgian mural monument to mason and woodcarver Robert Page (1707 - 1778) designed by Page himself. Page was a member of the Norwich School of artists (see St George Colegate).

He tended to work in coloured marble, and frequently used classical sarcophagi and clusters of cherubs to decorate his funeral monuments. For his own family monument, he uses a weeping cherub holding a cartouche, standing atop a white marble tablet.

Aside from that, the only real feature of note is a modern panel of stained glass, designed by Martin Travers. This originally stood in All Saints church, just around the corner, but All Saints is now redundant and used as a Christian hospitality centre, so the glass was moved here.

St John is open daily. It isn't what I'd call a compelling historic church, but there are features of interest, especially the 11th-century stonework visible in the external walls. 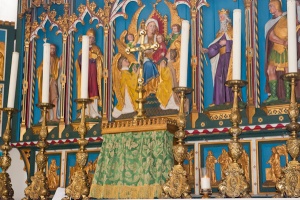 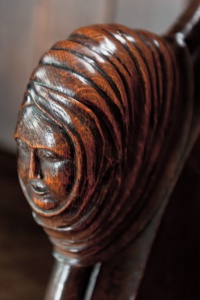 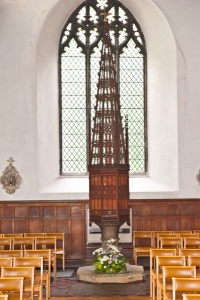