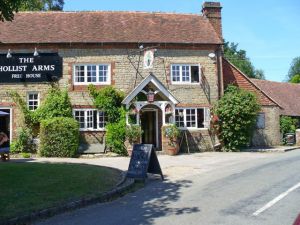 Hollist Arms pub, Lodsworth
A small village near Midhurst, on the banks of the River Lod. There are some lovely old buildings in the village, including a manor house built by the Bishop of London that dates to the 13th century. The bishop was granted a 'liberty' at Lodsworth, which basically meant that the manor of Lodsworth had status outside the ordinary legal system of the realm.

Thus, courts of justice would have been held at the manor, and villagers were exempt from tolls and ordinary taxation in other parishes.

Near the parish church of St Peter is an ancient holy well (also dedicated to St Peter) which is reputed to possess healing properties. This was a place of pilgrimage during the medieval period, as people came to bathe their eyes in the waters of the well, in the belief that this would heal vision problems. As for the church itself, it is a 13th-century building, with a west tower and a 14th-century chancel.

Only three miles distant is the medieval manor of Petworth House, which possesses a superb collection of art.

More self catering near Lodsworth >>

More bed and breakfasts near Lodsworth >>