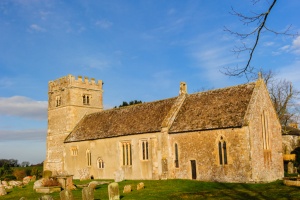 Most people come to the pretty Oxfordshire village of Great Coxwell, near Faringdon, to visit the extraordinary 14th-century tithe barn built by the monks of Beaulieu Abbey. But at the opposite end of the village from the barn is an even older building, the parish church of St Giles. The first church here was erected sometime in the Saxon period.

No trace remains of that Saxon building, but the current church dates to the 12th century, making it at least a century older than the tithe barn. Pause before you enter St Giles though, to examine the south door. The style of the carved decoration suggests that it dates to the 14th century.

Remaining from that 12th-century building are deeply splayed lancet windows in the north wall of the nave, and the simple stone font near the door. The westernmost nave window once illuminated a west gallery.

The next window to the east is probably late 13th century, in Decorated Gothic style, and the two small trefoil sections retain medieval glass - the only original fragments in the church. 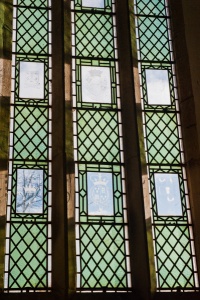 Further along the north wall, near the carved Jacobean pulpit, are the most interesting pair of historical features; memorial brasses set against the wall. One large brass is to William Morys, whose father Thomas was the first secular owner of Great Coxwell manor after the estate was seized from Beaulieu Abbey at the Dissolution of the Monasteries.

Beside Morys's brass stands that of his wife with their children - at a much smaller size - set beside her. The details of the 16th-century costume are still quite clear and beautifully outlined in both brasses, though they have obviously been quite worn for centuries spent set in the floor before the chancel arch.

The east window is set with seven heraldic panels of engraved glass. Note that I did not say 'stained glass', for these panels are not stained but cut into the glass surface. There is only one other known example of this engraved glass heraldic panel, at Pusey, on the other side of Faringdon. So if not technically unique, the Great Coxwell east window is certainly rare.

The panels show Lords of the Manor of Great Coxwell and were inserted on the order of the Earl of Radnor in 1795. The artist was Francis Edginton (1737-1805). Edginton made a career of designing and painting church windows.

So there you have it; a simple church perhaps, with no great drama, but containing several items worth seeing, set in a lovely little village. To the best of my knowledge, St Giles is regularly open daylight hours. 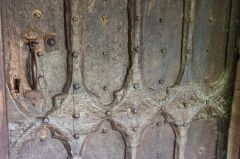 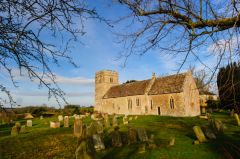 More self catering near Great Coxwell