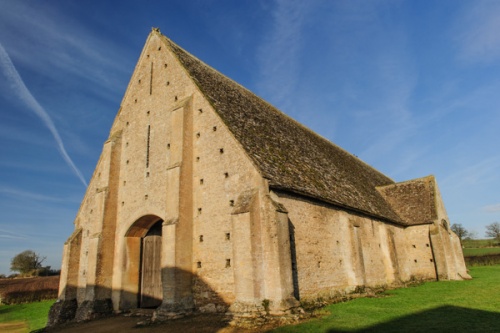 William Morris, who knew a thing or two about architecture and design, called it the most impressive building in England, and 'as beautiful as a cathedral'. What sort of building might make Morris so enthusiastic? An ornate church? A stately home? No, nothing so grand as that. It was a barn. But not just any barn.

In a peaceful location of the edge of the Oxfordshire village of Great Coxwell, outside Faringdon, stands a 13th-century tithe barn built by the monks of Beaulieu Abbey in Hampshire. At that time the abbey held a monastic grange at Coxwell (a grange being a farm worked for the abbey's benefit).

The grange was operated by a combination of hired servants and lay brothers, and the current barn would have been just one of the numerous farm buildings need to operate the grange. No other farm buildings have survived beyond.

The barn is built of Cotswold stone, with rubble walls and ashlar cornerstones for buttresses and window and door openings. The entire building is topped by a huge slate roof of Cotswold stone. The sheer weight of the roof meant that the barn had to be built to an aisled plan, with parallel sets of internal posts running the length of the structure. These posts rest on stone piers or plinths. These posts are braced three ways to the side wall and the central tie beam.

The complexity of the roof construction is without parallel in England; the only comparable structures at this time period are from continental Europe. A similar barn at Beaulieu St Leonards, also owned by Beaulieu Abbey, may have been similar, but unfortunately has not survived intact. So in every sense, Great Coxwell Barn is a unique medieval structure. 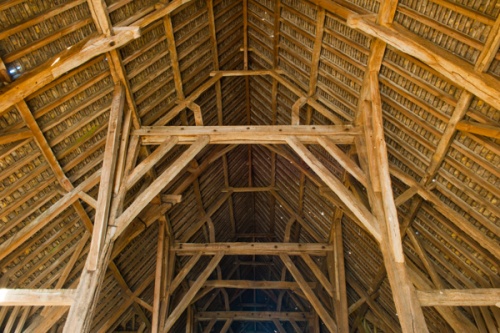 The barn stretches 144ft long and is 38ft wide, with an internal area of 5,502 square feet. There is one large set of doors (unlike many similar barns with often have two sets of doors). There are two porches, roughly centred in the length of the building, one on each side. One interesting feature is what appears to be a dovecot above the east door (facing the road). The large west porch has a second storey, reached by a stair. This chamber was probably set aside for the granger, who oversaw the farm operation.

In 1203 King John granted a group of Cistercian monks his royal manor near Faringdon to build an abbey. The monks did not stay long at Coxwell, but quite soon moved south to Beaulieu in the New Forest. However, the grange at Coxwell and other nearby properties remained an important source of income.

Coxwell was just one of many farms in a large estate stretching from Berkshire to Oxfordshire and into Wiltshire. The actual centre of the abbey estate was at Wyke, north of Faringdon, a location that has only recently been discovered after aerial photography revealed monastic buildings. At least two of the excavated buildings at Wyke were tithe barns equal in scale to the surviving barn at Great Coxwell. 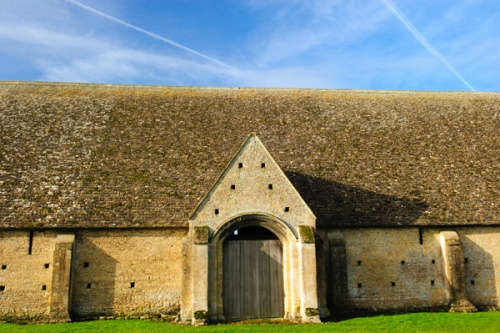 How did the grange function? Luckily, Beaulieu Abbey accounts for the years 1269-70 have survived, so we can answer that question with relative certainty. The granges like Coxwell raised sheep for wool, which was collected in a central location. They also produced seed and animal feed and sold the crops, the proceeds of which were paid in coinage to the abbey.

In addition to sheep, the grange raised pigs, fish, bees for honey, and cattle for both meat and dairy products. We do not know how many lay brothers worked at Coxwell, but the accounts show 15 hired servants.

So what do all these facts and figures mean? That Coxwell was a busy, prosperous place, part of a much larger, thriving estate whose profits enriched an abbey far to the south.

The grange remained in the hands of Beaulieu Abbey, but from the 15th century it was let to a succession of tenant farmers. One of these may lie in Great Coxwell church, where a memorial to William Morris calls him a 'sometime farmer of Coxwell'.

When Henry VIII dissolved the abbey in 1538 he appropriated their estates. Two years later in 1540, he sold Great and Little Coxwell to the bailiff of the Faringdon estate, one Thomas Moores. In the 18th century, it became part of the Coleshill estate, and large doors were added in the gable ends of the barn, to admit large farm wagons. The tie beams were reinforced in the 19th century, and rafters replaced. The barn was gifted to the National Trust in 1956. 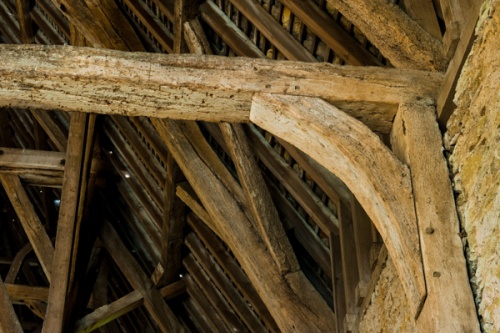 When was the barn built?

We do not know exactly, but it was some time shortly after 1300 AD. The stonework suggests a late 13th or early 14th-century date on stylistic grounds. Dendrochronology dating of the timbers suggests they were felled in the late 13th century, so based on the style of construction we can guess that the barn was erected in the period 1300-1310, slightly later than traditionally thought.

How was it used?

Why is a barn so large if it was only used as temporary storage for produce that was simply to be sold for profit, and the money sent to Beaulieu Abbey? It seems likely that not only was grain stored here in sheaves after harvest, it was also threshed inside the barn, in the space between the porch and rear doors. Obviously such a threshing operation requires a much larger space than simply storing the harvested grain.

The monks seem to have had a strong concern that the granger or another servant would defraud them, or simply make off with grain if they were not closely supervised. They left detailed instruction for checking and re-checking the amount of yielded grain against the estimated amount! Workers were to have their pockets and clothing checked for grain. Even their shoes were to be carefully checked to make sure they were not stealing small amounts of grain.

The barn stands at the extreme edge of the village, on Hollow Way, a lane leading towards Coleshill. There is a small layby in front of the barn, with room for perhaps 5 or 6 cars. The barn has been open to the elements every time I have visited, with an honesty box for admission. There is a very useful guide to the barn's history and construction - again, on an honesty basis. At the opposite end of the village is the very pretty parish church, which deserves a short visit. 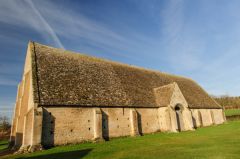 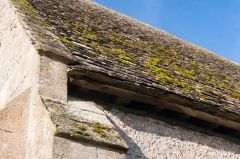 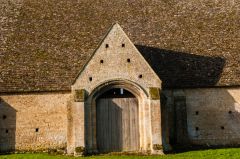