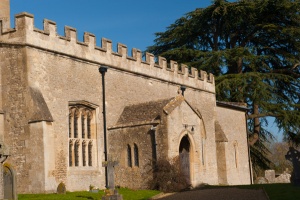 Built in the late 12th century, and much restored since then, Shellingford's church still boasts its 12th-century porch. Other original 12th century features include the chancel arch and three doorways.

The main south door has typical chevron carvings, but a dog-tooth hood moulding appears to have been added in the 13th century. The moulding terminates in wonderful serpent head carvings. There are beak head carvings on the north door (inside the vestry).

The interior of St Faith is filled with monuments to the owners of Shellingford manor from 1630-1830. The manor itself is gone, torn down when Kitemore House was built. All that remains are the three Tudor cottages known as Timberyard, beside the path to the church.

In the chancel is a monument to Sir Edward Neville (d.1632), whose father Henry was Ambassador to the Court of Henry IV of France on behalf of Queen Elizabeth. Nearby is a memorial to John Packer (d. 1682), and a very large monument on the north wall to Mary Packer (d. 1719) and Robert Packer (d. 1751).

The monument was obviously created in two stages, and it is interesting to note that the earlier inscription to Mary is in Latin, while the later inscription to Robert is in English. Clearly, conventions changed in the three decades between the two deaths! 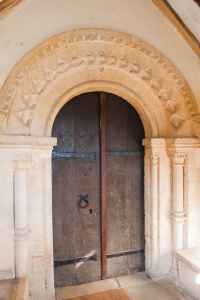 We do not know who designed the first monument, but the second is signed by John Flaxman (1755-1826), a prominent stonemason and designer of memorials. Note that Flaxman has misspelled Shellingford as Shillingford!

The east window of the chancel has interesting 14th and 15th century stained glass, most of it gathered here from other windows around the church. The south window in the chancel drops down to form a simple sedilia, with a recut piscina beside it. Both are likely 14th century. Beside the altar is a very worn stone with an indent for a memorial brass.

The brass itself is gone, but we have a clue as to who might have been commemorated here, for in 1719 the antiquarian Elias Ashmole, founder of the Ashmolean Museum in Oxford, visited Shellingford and described a brass to a priest named John of Bleobury, who died in 1372, as well as a section of stained glass in the east window showing the same priest.

It seems likely that this John of Bleobury founded a chantry here to say prayers for his soul and that of the king. If so, the chantry was swept away in the Reformation.

There is a plain stone font dating to the 15th century, topped by a Jacobean cover. The finely carved pulpit is early 17th century. Above the south porch entry is a label over an empty statue niche. The label is inscribed Carol Rex 1625, which might lead you to conclude that the porch was built then. However, the date refers to a 17th-century rebuilding of the tower.

Inside the porch, in a patch of uncovered plaster, is a partial signature 'John John... 1677'. This is not simple graffiti, but most like the signature of a workman responsible for remodelling the porch! 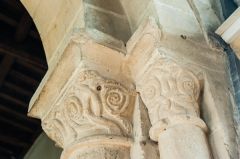 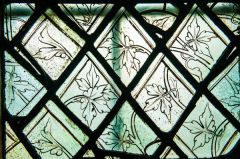 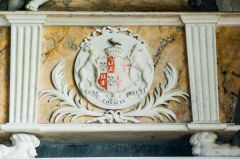 More self catering near Shellingford

More bed and breakfasts near Shellingford