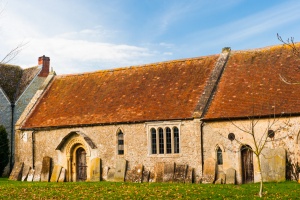 Used only occasionally for services (usually an annual service on St George's Day), this tiny Grade-II listed church is composed of solely of a nave and chancel. It once had a bell turret, but that was destroyed in 1873.

St George's dates to the 12th century, with a nave lengthened in the 13th century, and a chancel rebuilt late in that century. St George's is thought to stand on the site of an earlier Saxon church, of which no trace now remains.

The most interesting feature of the church is a very finely carved south doorway, only partially protected by a modern hood, but otherwise open to the elements. This is a wonderful example of Norman carving, with traditional Norman chevron decoration.

The east door jamb is carved with a very worn Green Man, vines flowing from his mouth. Other Norman features include the nave and chancel arch, and the font. It was here in April 1555 that Sir Edward Unton of Wadley House married Anne Dudley, Countess of Warwick.

St George's is a very simple Norman church, but the carved doorway is worth a look.

Note: Do not confuse St George's church with Church House, a hundred yards away (the really obvious tall tower). The latter is a private house! My satnav pitched me up outside Church House, but as it was obviously a private dwelling I was all at sea. I wandered about rather confused, looking for the church until a local woman out walking her dog pointed me to the actual church. It is at the sweeping bend in the road, west of Church House. 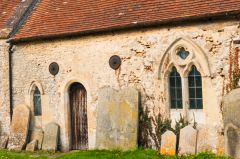 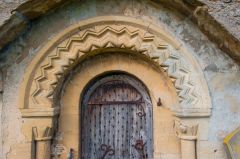 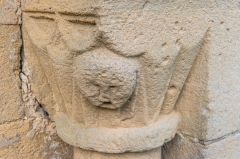 More self catering near Hatford

More bed and breakfasts near Hatford