HERITAGE HIGHLIGHTS:   Housed in the oldest row of houses in Selkirk 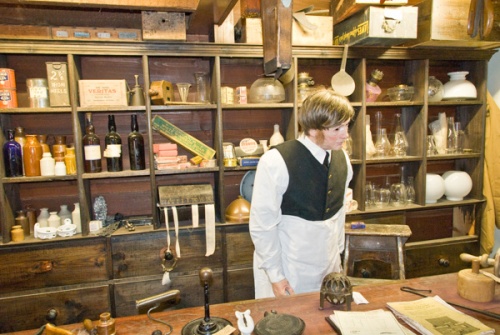 This simple museum of local history, housed in a former ironmonger's shop, tells the story of historic burgh of Selkirk. The museum is situated in a narrow, cobbled lane just off the market square that was typical of similar lanes or 'closes' in Selkirk over the centuries.

The stone-built house dates to the late 18th century, but the close itself has a recorded history going back over 400 years. The building housing the museum is part of the oldest row of houses in Selkirk.

The museum traces not only the history of the town and borough but of the people who lived in Halliwell's Close over the centuries. The museum is named for wig-maker Robert Halliwell, who owned several houses in the close.

A wide variety of traditional craftsmen worked in the close from the 17th century, including weavers, barrel-makers, tailors, shoemakers, and butchers, and that industrial heritage is reflected in the museum displays.

Explore a timeline of local heritage and find out about 'The Souters of Selkirk'. 'Souter' is the term given to a native of Selkirk. It means cobbler, which gives you some idea of the town's past! The name was immortalised in a popular song which ends with the words 'There's gallant Souters in Selkirk, as long as there's water in Tweed'.

One of the highlight exhibits is the 'Flodden Flag', a reminder of one such gallant soldier. In 1513 the men of Selkirk marched to meet the English at Flodden Field. Only one soldier returned, a man named 'Fletcher, bearing a captured English flag belonging to the Macclesfield regiment. The gallant Fletcher made it back to Selkirk bearing the flag, then collapsed and died. The episode gives Selkirk its most enduring and poignant memories.

Another museum highlight is a recreated ironmongers shop, with shop display cases and shelves crammed with all the paraphernalia of a bygone age.

In addition to the museum displays, there is a gallery hosting changing exhibits of art, crafts, and local history, as well as a visitor information centre and shop.

I'm not really a 'museum person' but I really enjoyed visiting Halliwell's Museum. It really helps give a sense of the town's history and the location in the cobbled courtyard is a memorable one. Access is easy; the museum and associated visitor centre are signposted from the town centre. 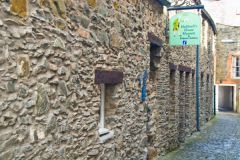