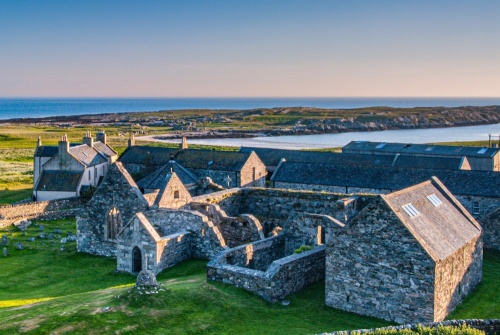 The remains of a 14th-century Augustinian priory stand in isolated splendour on the tidal island of Oronsay, which can be reached only by walking across a tidal strait from Colonsay to the north. The medieval priory may stand on the site of a 6th-century monastery established by St Oran. The beautifully preserved remains include the priory church, cloister, chapter house and refectory. The priory may have been founded by John I, Lord of the Isles.

Tradition says that the first priory on Oronsay was established by St Columba, but there is no archaeological evidence to support this. The current remains are of a priory founded between 1325 and 1353, with the monks probably coming from Ireland. 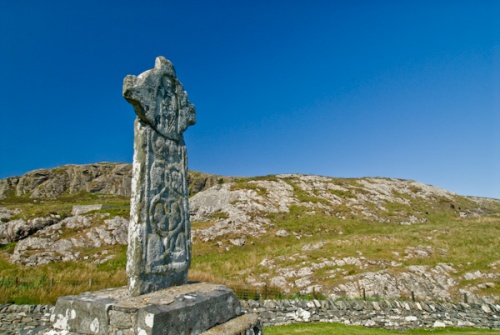 The remains of the monastic buildings are quite extensive. In addition, there are two carved crosses at Oronsay Priory. The largest is the so-called Oronsay Cross, or the Great Cross, a late 15th century cross of the type called 'disc-headed'. It was probably created for Malcolm MacDuffie, Lord of Colonsay and chief of clan Duffie, and was likely imported to Oronsay from elsewhere.

The smaller carved cross may predate the Oronsay Cross by many centuries. It may also be recomposed from pieces of two separate crosses. This smaller cross stands atop a small mound inside the Priory gates.

The Oronsay Cross was probably crafted at Iona, but Oronsay itself evolved a school of carving in the late medieval period, producing a variety of carved crosses, effigies, and grave slabs which can be found throughout Argyll. 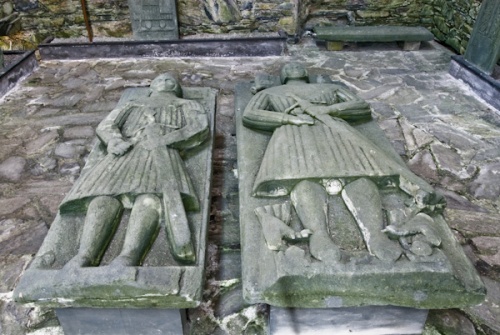 Many examples of locally produced late medieval grave slabs and other carvings are preserved in a restored monastic building immediately behind the ruins of the priory church. These include some quite remarkable tombs and effigies, most dating from 1500 to 1560.  The exhibit includes two superb effigies of MacDuffie chiefs.

The Oronsay school of carving can be recognized by the use of a motif of a sailing vessel with sails spread.

Oronsay Priory can only be accessed on foot at low tide by crossing The Strand strait from Colonsay. Tide times are posted at the ferry terminal in Scalasaig. There is a parking area at Garvard, at the southern end of the B8085.

From the car park, it is simply a matter of waiting for the tide to recede enough to make the mile-long crossing to Oronsay. Once on Oronsay just follow the obvious track as it slowly curves west to the priory.

It will take at least 30 minutes from the landfall on Oronsay to reach the priory, and you need to allow plenty of time to make the return trip in time to beat the returning tide, or you will be stranded on the island!

Don't worry; I've made the crossing several times and never got stranded, though I did cut things rather fine one time when I wanted to photograph the sun setting on the priory and kept lingering for 'just one more' photo.

It's a lovely walk, and the views from Oronsay to Jura are simply stunning on a clear day. 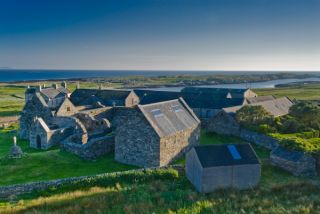 About Oronsay Priory
Address: Oronsay, Isle of Oronsay, Strathclyde, Scotland
Attraction Type: Abbey
Location: The island of Oronsay is accessible only at low tide from Colonsay. There is a small free parking area at the end of the road at Garvard. Check tide timetables and bring rubber boots for the crossing! The road on the Oronsay side of the crossing leads straight to the priory, and will take at least 15-20 minutes to walk.
Location map
Oronsay Priory Photos
OS: NR355885
Photo Credit: David Ross and Britain Express

Nearby accommodation is calculated 'as the crow flies' from Oronsay Priory. 'Nearest' may involve a long drive up and down glens or, if you are near the coast, may include a ferry ride! Please check the property map to make sure the location is right for you.

More self catering near Oronsay Priory >>