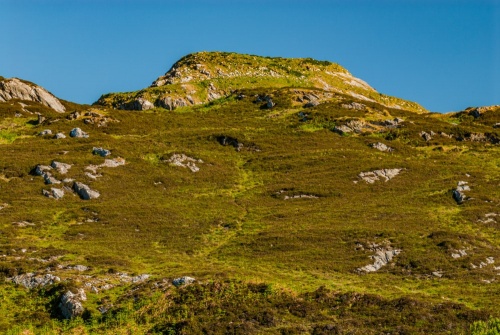 Dun Eibhinn, sometimes called Dun Eivan or Dun Evan, is an early medieval hilltop fort on the Isle of Colonsay, just west of Scalasaig. The fort occupies the top of a flat-topped knoll on the central range of hills that run down the spine of the island.

Dun Eibhinn is thought to have been built in the early years of the 11th century and was later occupied by the Norse, who ruled a vast territory on Scotland's west coast. In the early 13th century the fort passed to Clan Macfie.

There are two versions of what happened next.

According to the roadside plaque erected by Clan Macfie, the last Chief, Malcolm Macfie of Colonsay, moved his seat from Dun Eibhinn in the early 17th century.

An alternate version is that Malcolm Macfie was treacherously killed by Coll Ciotach Mac Domhnaill, whose name, appropriately, translates as Coll the Crafty. Coll Ciotach then became Lord of Colonsay and under his lordship, the dun was allowed to decay. 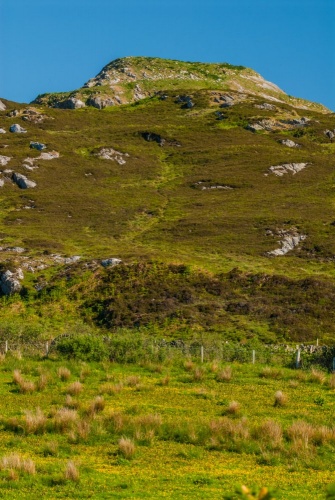 Dun Eibhinn from the south

The dun is protected by two rings of stone walls, though many of the stones have been robbed for use in local building projects. The inner wall encloses a flat area within which are the remains of several hut foundations. It seems likely that there was a medieval settlement at the foot of the hill below the fort, though a study in 1984 concluded that those remains wee later, dating to the 18th or 19th centuries.

The dun measures roughly 20m x 18m and is oriented north-east to south-west. The walls may have been as much as 4m thick. A gap in the northeastern wall suggests an entrance. The foundations of at least five rectangular buildings have been found within the inner walls of the dun. The best-preserved of these buildings measured just 5.6m x 3.2m, with walls up to 1.6m thick. 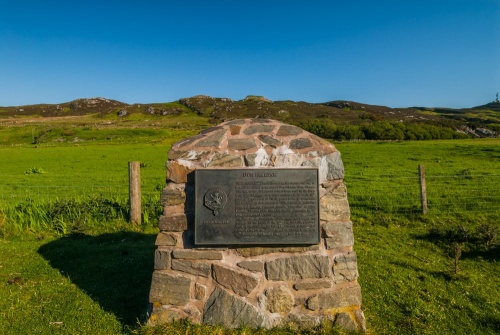 The Clan Macfie cairn with Dun Eibhinn beyond

A memorial cairn and plaque, erected by Clan Macfie, stand beside the B8086 about 500m west of the Colonsay Hotel. The plaque reads:

The detached rocky knoll situated on the skyline directly in front of the viewer is the site of Dun Eibhinn (Dun Eivan). This dun, or fort, is believed to have been built by the High King Gille Adamnan as a royal residence in the early 11th century. It was a seat of Viking power in the Western Isles and occupied by descendants of Gille Adamnan, including Somerled and his grandson Donald, progenitor of Clan Donald. The fort came into Clan Macfie possession in the early part of the 13th century.

The Macfie or Macduffie Chiefs were Keepers of the Records for the Lords of the Isles and the Clan provided many of the Priors for the Priory on Oronsay. Malcolm, last Chief of Clan Macfie, moved from Dun Eibhinn in the early 17th century and the fort fell into disuse from that time.

Access to the dun itself is difficult, but it is easy to find a good observation point. Clan Mcfie has erected a memorial cairn on the B8086 about 500m west of the Colonsay Hotel (grid reference NR384940). The cairn and plaque are on the north side of the road, next to a lay-by for vehicles to park. From here, you get an excellent view north to Din Eibhinn, atop the ridge directly in front of you.

There is no direct access to the dun and no trails, so to reach it you would have to climb over the farm fence, across the field, and scramble up the rough hillside.

Nearby accommodation is calculated 'as the crow flies' from Dun Eibhinn Fort. 'Nearest' may involve a long drive up and down glens or, if you are near the coast, may include a ferry ride! Please check the property map to make sure the location is right for you.