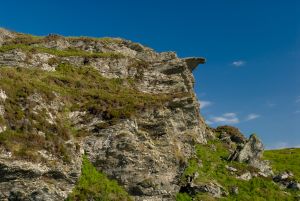 There are plenty of natural rock formations around the world called by the charming moniker of 'Hangman's Rock', but how many of them really were used to hang condemned criminals? This one was.

According to legend, Hangman's Rock, on the slopes of slopes of Beinn Eibhne, at the southern tip of Colonsay, was used for public hangings, performed by passing a rope through a hole in a natural rock outcrop.

Though there is no firm evidence to support this fact, it seems likely enough, given the shape of the rock, and the historical culture of the remote Scottish islands. Certainly, Hangman's Rock is striking, and might well have suited the purpose of a gallows quite nicely!

The location overlooking The Strand and Oronsay is quite simply stunning.

About Hangman's Rock
Address: Garvard, Colonsay, Garvard, Argyll and Bute, Strathclyde, Scotland
Attraction Type: Countryside
Location: Park at Garvard, at the end of the B8086. Walk out onto The Strand, keeping to the left (east) shore. The Hangman's Rock will be clearly visible on an outcropping to your left.
Location map
Hangman's Rock Photos
OS: NR374905
Photo Credit: David Ross and Britain Express

Nearby accommodation is calculated 'as the crow flies' from Hangman's Rock. 'Nearest' may involve a long drive up and down glens or, if you are near the coast, may include a ferry ride! Please check the property map to make sure the location is right for you.

More self catering near Hangman's Rock >>

Dalmunzie Castle is a stunning quintessential Lairds mansion turreted in the Scots Baronial style & standing proudly at the head of a 6500 acre estate dating back to 1510. Enjoying … more >>