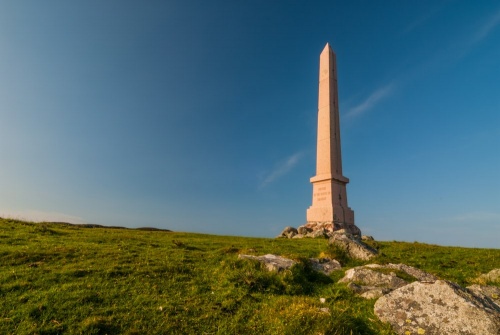 Standing atop a low hill above Scalasaig is a striking 19th-century obelisk, erected by the residents of Colonsay in memory of Duncan McNeill, sixth Lord of Colonsay and 1st Baron of Colonsay and Oronsay (1793-1874). The monument occupies the summit of Cnoc na Faire Mor, a hill some 70m (230 feet) high.

The Monument was erected in 1879, five years after McNeill's death. It is made of granite from Mull and stands upon a square stone plinth.

Given the striking monument, one has to ask what made the islanders so grateful to their laird as to erect a monument in his honour. In this case, it isn't so much what McNeill did as what he didn't do; he didn't clear the islanders off their traditional lands during the Highland Clearances, as so many other lairds did across the Highlands and Islands. 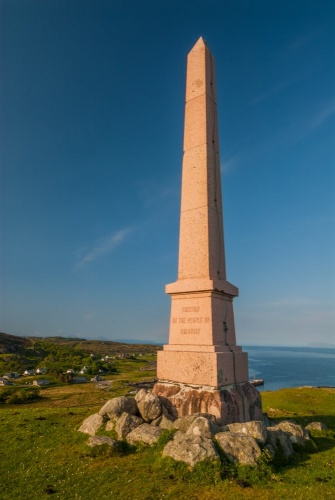 Duncan McNeill was the son of John McNeill of Colonsay. He was born on Oronsay and was educated at St Andrew's University before going on to read law at Edinburgh University. He never married, but had a long and distinguished career as an advocate, judge, and politician. He served as Advocate-Depute in 1820 and was named the Sheriff of Perth in 1824.

History aside, it is well worth the climb to Lord Colonsay's Monument just to enjoy the wonderful views over Scalasaig and across the sea to Jura and Mull. 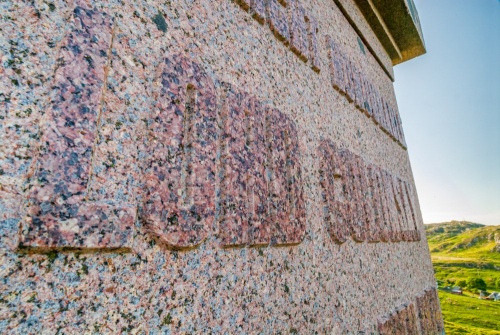 From the ferry terminal in Scalasaig you can see the monument on its hilltop, so it is fairly easy to orient yourself. Take the lane immediately to your left as you leave the ferry dock and follow it up the hill as it curves up to a cafe. To the right of the cafe is a gate. Go through the gate and follow the grassy track uphill. You will come to a telephone pole.

Bear left, towards the hilltop, where you should be able to see the monument. There is no direct path to the summit of Cnoc na Faire Mor, but you really can't go wrong. Just keep going up! The final section of the climb is steep, so you may have to wind around the summit of the hill. Be aware that sections of the walk may be boggy, so wear good waterproof hiking boots! 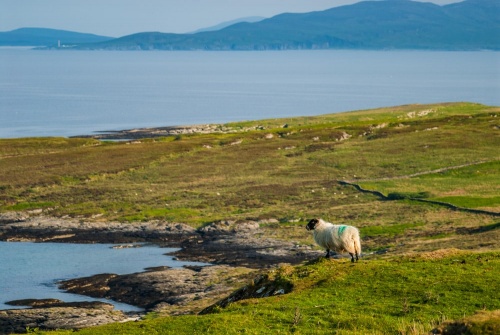 The view from the Lord Colonsay Monument

You can return the way you came, or bear left, to the north-east, where you can see the whitewashed Georgian parish church, built in 1808.

Nearby accommodation is calculated 'as the crow flies' from Lord Colonsay Monument. 'Nearest' may involve a long drive up and down glens or, if you are near the coast, may include a ferry ride! Please check the property map to make sure the location is right for you.