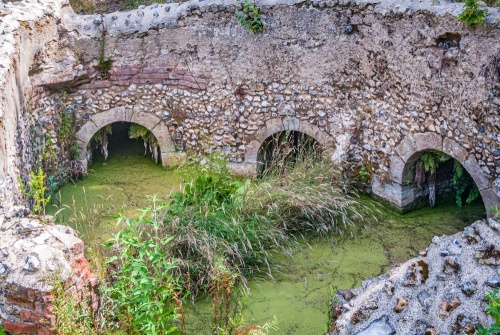 Conduit House is all that remains of medieval waterworks created to supply the nearby abbey of St Augustine, Canterbury.

Conduit House is a wide circular cistern in the ground, with a set of pipes running into it from several directions. The conduit house gathered water from the hillside above the abbey and then sent it through further pipes down the hill to the abbey site.

Water was carried through 3-inch lead pipes and fed into a water tower at the abbey. From the tower, it flowed into smaller tanks serving the kitchen, infirmary, and other parts of the monastery.

The same group of springs supplied water for other locations in the town. Canterbury Cathedral, for one, used the same water supply. There were several more water conduit houses and collection tanks taking water from the same source. 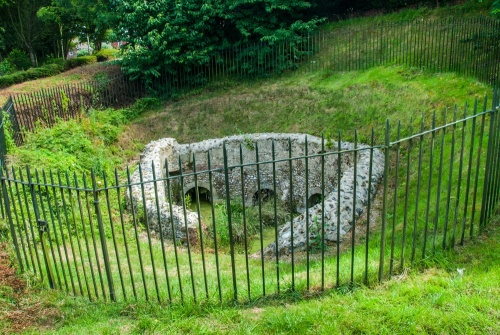 The Conduit House continued in use after the Abbey was suppressed by Henry VIII and supplied water for a local brewery into the 19th century.

A good source of clean water was essential for monasteries, and monastic houses were often established with water in mind. Monasteries located in towns faced a more serious problem and often had to bring in water from great distances, relying on a conduit house, or covered settling tank, to gather spring water and carry it to the site by means of long pipes.

St Augustine's Abbey's conduit house was built in the 12th century. The roughly octagonal masonry settling tank is now divided by an 18th-century wall made of brick and chalk. Seven openings admit water from springs into the tank. There are four large arched openings and three smaller ducts.

The water tank is made of chalk and flint set on chalk foundations. The inner face of the walls is made of coursed flint and was originally covered with render. The tank bed is chalk, whose high clay content keeps the water from flowing through.

In the 18th century, the medieval tank was subdivided and a new roof built, supported by two barrel vaults. The remodelling was probably the work of Sir John Hales, who owned the water supply. In 1773 Hales granted the city of Canterbury the right to use the holding tank to augment its own water supply. That 18th-century conduit house roof collapsed in 1988, leaving the original medieval tank and tunnels in view.

The Conduit House is right beside the Stour Valley Walk, a long-distance path that leads through Canterbury along the Stour River valley.

It takes about 10 minutes to walk to the Conduit House from the abbey site. Be aware that it is not well signposted!

From the abbey entrance on Longport, turn left and follow Longport east to North Holmes Road. Turn left, and follow the road past St Martin's churchyard. Turn right on St Martin's Road (NOT on St Martin's Avenue), and right again on King's Park. You will see the Conduit House at the top of a rise on the right, sheltered by low hedges. 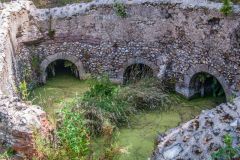 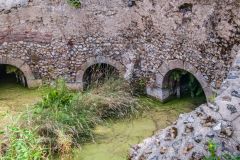 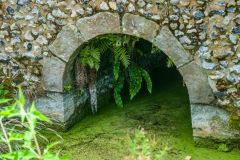 More self catering near Conduit House >>