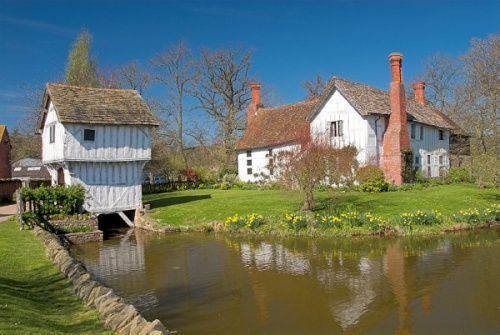 The National Trust owns a vast Herefordshire estate centred on Lower Brockhampton, taking in 1700 acres of woodland and farmland. At the heart of the estate is Lower Brockhampton Manor, a 14th century moated manor house guarded by a timber-framed gatehouse. There is also a ruined chapel in the grounds and an extensive system of trails throughout the estate. 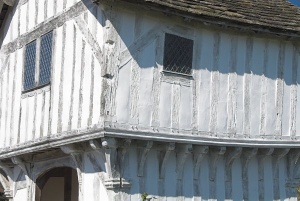 This lovely timber-framed manor house dates to the late 14th century and is surrounded by a wide moat. The only access across the moat is through a picturesque timber-framed gatehouse, built in 1530. A short distance beyond the Tudor gatehouse stand the ruins of a Norman chapel.

The manor was built by the Brockhampton family, who lived here since at least the 12th century. The name comes from a combination of words meaning 'brook settlement', and was first recorded as Brochantone in 1166.

The family built the Norman chapel here around 1180, but it was another 200 years before a descendant of the family named John Domoulton built the moated manor house we see today. Timber for the house was cut from the huge expanse of woodland on the surrounding estate. The chapel seems to have only served as a family chapel, as the parish church was at Bromyard, and later at Whitbourne.

The original Hall was laid out on an H-plan, with a great hall and parlour forming the core of the house. The design has been altered over the centuries and now resembles more of an L-shape, with one wing being a 16th-century extension. 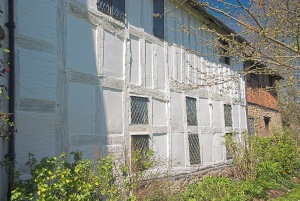 The side wall of the hall

Between 1530-1540 the two-storey timber-framed gatehouse was added. It almost certainly was not needed as a defensive measure but was more of a status symbol, a way of showing how prosperous the family was.

The Domoulton family and their descendants lived at Lower Brockhampton for over 500 years. In the 18th century Bartholomew Barneby inherited the estate and began to build a more fashionable Georgian mansion elsewhere on the estate. Brockhampton House was designed by Thomas Prichard, better known as the architect of the Iron Bridge at Coalbrookdale.

The family moved into Brockhampton House and left the medieval moated hall as a farmhouse. After John Barneby built a new chapel near the House in 1799 the 12th-century chapel was demoted to a general purpose agricultural building. Around 1871 JC Buckler restored the Hall to a romanticised Victorian version of a Gothic house.

When the family line died out in 1948 the entire estate was granted to the National Trust, who restored the Hall and gatehouse. 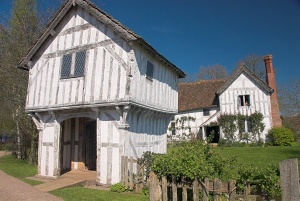 The timber-framed gatehouse and Hall

The result is a delight; offering a wonderful glimpse into Tudor life, in a picturesque wooded setting. The great hall is the heart of the house; it is of two bays, open to the roof and has a screens passage at the east. The charming gatehouse is like a Tudor house in miniature, and perhaps it was intended to be a 'visual pun' as an English Heritage study of the site suggests.

The ruined chapel has an undivided nave and chancel, with traces of a south door and a Romanesque window. There are three 13th century lancet windows, and larger 15th-century windows in the east and west walls. There are remains of some family memorials inside the walls.

To the north of the house is a large orchard, with traces of medieval earthworks running through it.

The view of Lower Brockhampton Manor, surrounded by its wide moat and guarded by its small timber gatehouse, is one that will live long in the memory of visitors. It seems a timeless view, one that evokes a sense of English heritage at its very, very best. It is no wonder that images of the manor feature heavily in travel brochures and in National Trust literature! It truly is one of the most enjoyable and picturesque historic sites in England. 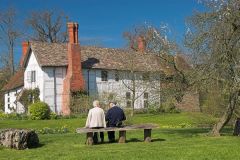 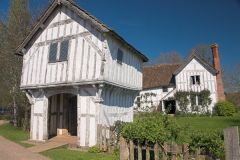 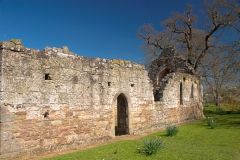 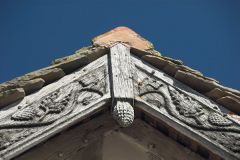 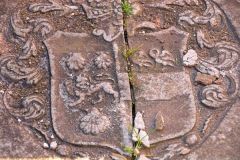 More self catering near Brockhampton Estate >>