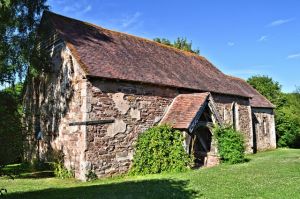 Lower Sapey, St Bartholomew's Church
An early 12th-century church in a lovely countryside setting, St Bartholomew's church is a delightful example of a simple Norman church. The building was rebuilt in the 14th century and again in the Georgian period, but the core is Norman.

The church stands on a steep bank above a stream, and can only be reached by a narrow, winding country lane. It stands beside a 17th-century farmhouse, but apart from that, it seems alone in the world, as if time has passed it by. The Domesday Book mentioned a priest here in 1086, and it seems likely that there was a church here in the Saxon period.

The building is extremely simple, built of sandstone rubble, with a small chancel and nave entered by a 14th-century timber porch. The south doorway is Norman, from about 1150, and is carved with traditional Norman decoration. The door itself may date to the 14th century.

The interior is very simple, with plain, plastered walls and ceilings. The windows are a mix of Norman and 14th century. The floor is not paved, being constructed of gravel and clay packed down to create a hard surface. The timber roof is probably 14th century.

At the west end of the nave are the base and shaft from the original Norman font, but the bowl has been transferred to the new parish church of St Bartholomew's in Lower Sapey village.

On the north wall are fragments of wall paintings. Not all are ancient, as you can easily see a Georgian royal coat of arms, but there are surviving medieval fragments as well. St Bartholomew's is no longer in regular use and is cared for by the Churches Conservation Trust.