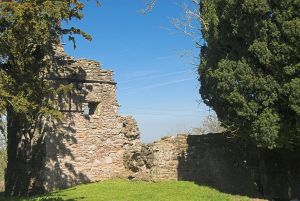 Edvin Loach Old Church is a ruined 11th-century church set within the earthwork defences of a Norman motte and bailey castle. A more modern Victorian church stands nearby.

The church is built of sandstone rubble dressed with tufa, and is of a very simple plan, with a single aisless nave, chancel, and west tower. The walls of the nave and chancel stand to a maximum of 3 metres high, and the tower to only 5 metres.

The oldest section is the nave, which was built in the 11th century. Here, the construction is in a lovely herringbone pattern so often used in early Norman or late Saxon construction. By contrast, the walls of the chancel are primarily coursed rubble, which would indicate a later date.

Parts of the walls were rebuilt a century later. The east wall has a 13th-century window. Outside the church is a burial ground which is contemporary with the church.

While you are there. do spare a few moments to explore the Victorian church; it is really quite interesting, and possesses a pair of medieval bells from the old church. The bells were stolen, and missing for six years before they were rediscovered decorating an estate agent's window in Wiltshire!