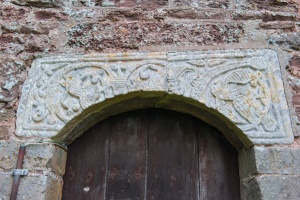 The Saxon cross-shaft at
Acton Beauchamp

The word 'idyllic' might well have been custom-made to describe the location of St Giles church, Acton Beauchamp. So was the word 'historic', for this lovely little country church has plenty of historic interest in addition to a wonderfully peaceful location. The major interest is a beautifully carved Saxon cross-shaft that has been re-used to form the lintel of a Romanesque door to the west tower.

The cross-shaft probably dates to the 9th century and depicts birds and peculiar beasts within a fanciful scrollwork pattern. The tower is the only remaining medieval part of the church; the remainder was rebuilt in simple Georgian style in 1819; the last Georgian church to be built in Herefordshire.

The capitals of the south door are beautifully carved with Norman motifs, though the carving is showing signs of wear as there is no porch to protect the doorway. On one capital is a scalloped design, while the other shows three carved heads.

Within the church, the architecture is decidedly Georgian, with large round-headed windows in the nave and chancel. One exception to the Georgian style is the Perpendicular font at the west end of the nave. 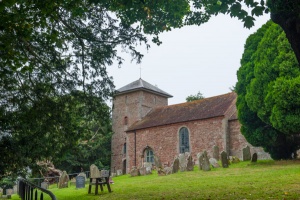 There is a bit of a mystery attached to the font; it is carved from limestone, but the church is constructed of local limestone. This suggests that the font may have been brought here from another church. The top edge of the font bowl is damaged on two sides, and according to the small sign propped against the font, this damage may have been caused by papal representatives during the Reformation.

According to the story as related, when Henry VIII made his break from Rome, the Pope sent commissioners to England to retrieve holy water from church fonts. Now, most fonts at this time had a hinged cover which was usually locked to prevent theft of holy water by parishioners. The papal representatives were forced to break open the font cover to get at the water inside, and they damaged the font in the process.

There are not many notable monuments within the church, but perhaps the best is that of Thomas Heming of Church House (d. 1777), his wife Mary (d. 1776) and their descendants. There is also a neo-classical wall monument to Henry Brace (d. 1773) with an amusing mis-spelling.

The inscription reads in part 'the Remains of Henry Brace, where hear interred, May 9, 1773'. Of course, it could be just poor grammar, perhaps carved by an illiterate stonemason who had to sound out the words phonetically, but it is also true that until relatively recent times there was no such thing as 'proper' spelling. 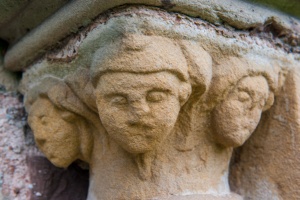 Carved heads on the doorway capital

The pulpit is simple Jacobean or early Georgian work and there is a lovely 18th-century brass chandelier, again in very simple rustic style.

St Giles church is not extravagant or blessed with an abundance of historical features however it is well work visiting for the Saxon cross-shaft alone, and the peaceful setting is just about as good as an English country church can get! St Giles on usually open during daylight hours.

You've heard the expression, 'getting there is half the fun'. In the case of St Giles, getting there isn't necessarily half the fun, but it can be a bit of a challenge. If you reply on your satnav, as I did, you may end up completely bewildered - as I did. The nearest postcode takes you close to a junction of minor roads north-east of Bishops Frome, with nary a church in sight.

The solution, as I eventually discovered, is to take the lane north that leads to the gates of Church House. There is a layby just before the gates. Take the green lane opposite and walk up the hill. The outline of the church will swiftly come into view. 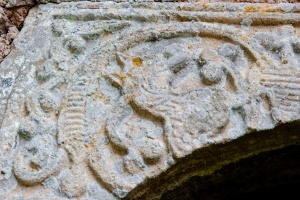 Beast carving on the Saxon lintel 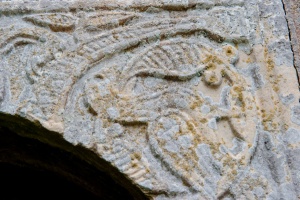 Foliage and bird carving on the lintel 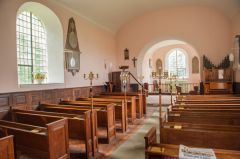 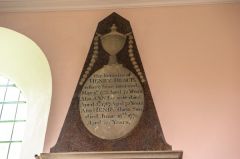 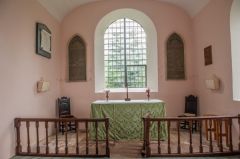 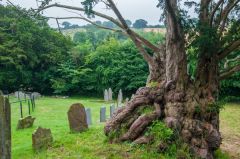 More self catering near Acton Beauchamp