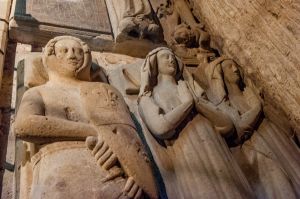 A small 12th-century country church in a quiet Herefordshire village. The church is built of local red sandstone and consists of a nave, chancel, south porch, and a west tower topped with a short wooden spire. The chancel and nave date to 1170, and the stocky west tower dates to the early 13th century. The south door is a mixture of 12th and 13th-century work, with some nice carving detail.

The chancel boasts windows from 1320 and a piscina from the same era. There is also a small window believed to date to the 12th century. There are a pair of 14th-century tomb recesses, but the effigies are not in the niches, having been transferred to the tower recess.

In this space under the tower are seven historic monuments. The earliest monument dates to about 1290 and depicts a knight in armour and his wife.

The knight's feet rest on a lion, and he wears a shield showing the arms of Zeddefen. A nearby effigy shows a slightly later knight with two wives. A further 14th-century effigy shows a very small lady, or perhaps a child.

Near this is a much worn grave slab, dated to 1325, to Maud de Edefin (Zeddefen). This is of a style known as a 'pardon monument', so named because it invites readers to receive a pardon if they pray for the deceased. The inscription on the slab makes this clearer:

Just to the west of the church stand the remnants of a Norman motte and bailey fortification.

This delightful country church seems to have wandered off down a forgotten lane, far from neighbours. The atmosphere is one of idyllic countryside and peace. The really interesting features of St Michael's are the medieval tombs under the tower.

The effigies are generally in very good condition, though they are set behind an iron railing so it's not as easy to see them up close as you might wish. Beside the tombs is an old bier, used for carrying coffins to burial. Its presence rather brings home the passage of time and how long this church has stood in its leafy enclave. 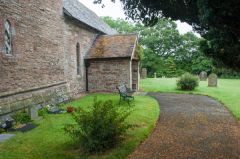 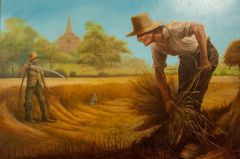