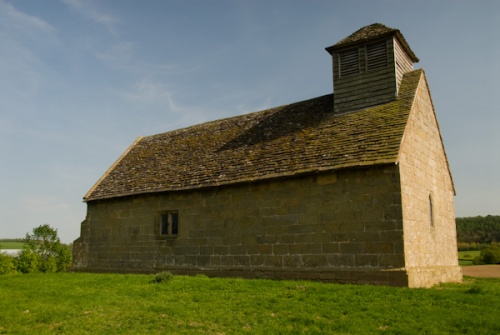 Langley Chapel is a small rural chapel dating primarily from the 14th century. The first chapel here was built by Richard Burnell sometime after 1313 to serve as a private family chapel. Parts of that 14th-century building are incorporated in the present chapel. The chapel was rebuilt in 1546 by the Lee family to a simple rectangular plan augmented with a small bellcote at the west end.

The building is of grey sandstone braced with corner diagonal buttresses at the east end. There is a weatherboarded bell turret over the west gable. A pair of 16th-century doorways pierce the south wall.

Most of the interior furnishings date to the early 17th century when the chapel was restored by Sir Humphrey Lee. Lee's work has been called 'an almost perfect set of 17th-century timber furnishings' and they include a musician's gallery at the west end.

One of Sir Humphrey's additions was a small, moveable pulpit. Opposite the pulpit is a large and impressive reading desk. Unusually, the reading desk has its own canopy roof.

The largest box pew, nearest the pulpit, was reserved for the Lee family, lords of the manor. Smaller box pews further from the altar were occupied by tradesmen and farmers. Servants and farm labourers did not warrant box pews; they sat on simple benches at the back.

A plasterwork frieze of fleur-de-lys and Tudor roses runs along the top of the south wall. There would originally have been a matching frieze on the north wall, but this has been lost over time. Look for medieval tiles set into the chancel floor.

By the late 17th century, the chapel had fallen into disuse, and as a result, the furnishings remain unchanged, like a time capsule of the early 17th century, untouched by changing fashions in church decoration. It finally fell out of use entirely in 1871. It is a beautiful old building, and well worth a visit. 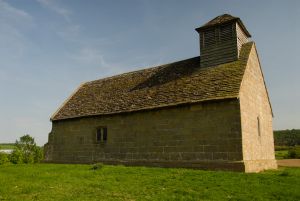 More self catering near Langley Chapel >>