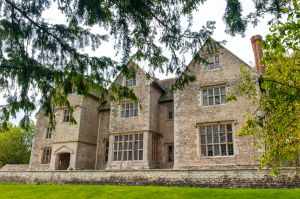 A lovely Elizabethan manor house standing on the slope of Wenlock Edge. Wilderhope Manor was built in 1585 and consists of four gabled blocks under a stone tile roof. The windows retain much of their original 16th-century glass.

The manor is entered through a central porch which features a suitably nail-studded door of oak. The walls are timber-framed with plaster infill. The most striking features of the interiors are the finely carved spiral stair, and a number of excellent plasterwork ceilings, particularly in the hall and dining area.

The plasterwork depicts common Elizabethan symbols such as the Tudor rose and Prince Arthur's Feathers. As for the staircase, it is built of solid blocks of oak with a central newel post stretching the full 2-storey height of the stair.

In addition, there are several 16th-century fireplaces. There are circular walks available through the woods and farmlands surrounding the manor.

Though owned by the National Trust, the manor is operated as a youth hostel. This makes little difference as far as visiting the manor goes but may mean that some rooms are not accessible on the day. When we visited there were only two rooms open to view on the ground floor; the hall, now used as the hostel's dining room, and a smaller sitting room. In addition to these chambers, there was the original cross-passage, now the entrance hall.

The most enjoyable feature of the hall interior is the 16th-century plasterwork in the hall and sitting room. There are beautiful geometric patterns on the ceiling and surrounding the fireplace in each room. Some of the plasterwork depicts natural objects like flowers and vines, but there are also some rather touching details, like a heart with initials inside it. Over the sitting room fireplace are heraldic symbols, showing off the family's connections.

Though the architecture is enjoyable, its the setting that really makes Wilderhope so enjoyable; the house stands on a small terrace set into the sloping hillside, with views across the valley to green hills beyond. This is a quiet place, a peaceful, secluded spot, where it is easy to imagine that you have stepped back in time.

Exploring Wilderhope's interior will not take long, even for enthusiastic Elizabethan historians, due to the limited rooms on view. It takes far longer to actually find Wilderhope in the first place! It is not well signposted; I didn't see any brown tourist signs, and don't look for the National Trust oak leaf symbol anywhere; rather, look for signs to the YHA youth hostel, signed from the B4371 at Longville and from the B4378 near Broadstone. 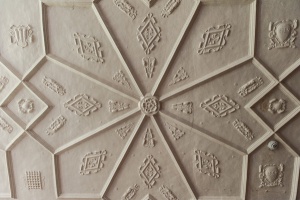 Ornate plasterwork in the hall 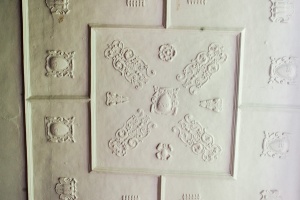 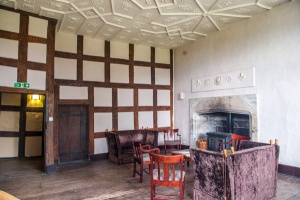 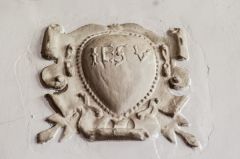 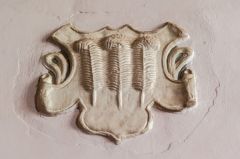 More self catering near Wilderhope Manor >> 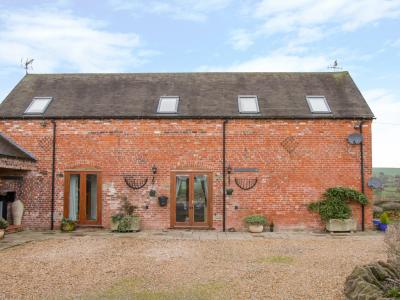 An attached barn conversion situated close to Much Wenlock. It houses three double bedrooms and can sleep up to six people.
Sleeps 7 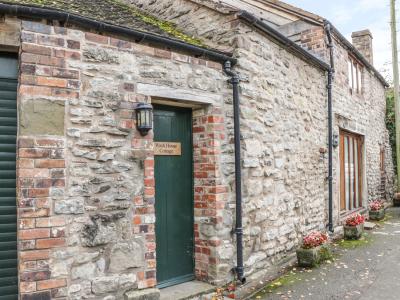 This cottage is located in the village of Much Wenlock, near Callaughton, and can sleep two people in one bedroom.
Sleeps 4