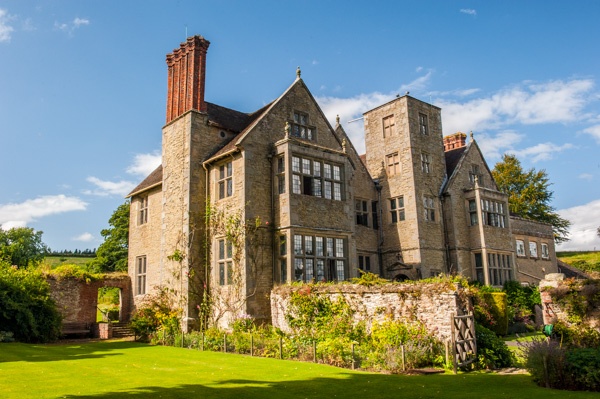 At Shipton Hall, an attractive mix of historic buildings is grouped about an Elizabethan manor house. Beside the manor are a walled garden, a medieval dovecote, a fine Georgian stable, and the Saxon parish church. The interiors of Shipton Hall feature exquisite rococo decoration by Thomas Pritchard, the architect responsible for designing the famous Iron Bridge across the Severn at Coalbrookdale. 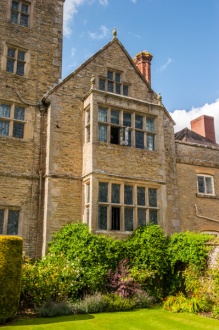 The first hall at Shipton was a medieval house owned by Wenlock Priory. That early house may have been destroyed to make way for the current Hall, built in 1587 by Richard Lutwyche, who later gave it to his daughter as a dowry gift when she married Thomas Mytton.

The house is laid out on an H plan and includes sections of material from the medieval house. The Elizabethan Hall was greatly rebuilt in the mid-18th century to produce the beautiful building we see today.

It is that 18th-century rebuilding that gives Shipton a peculiar sense of being a house of two halves. There is the original 16th-century house, all dark panelling and rich carving. Then there is the rear extension by Pritchard, very much an elegant Georgian showpiece, with ebullient rococo decoration.

As you move from room to room in Shipton Hall you seem to move from the Elizabethan to the Georgian period and back again. The exterior shows this split-personality to perfection; the front of the Hall is pure Elizabethan symmetry, save for an off-centre tower, approached up a path flanked by topiary. The rear of the house leaps forward two centuries, without a trace of Elizabethan style visible except the towering clusters of decorative brick chimneys that the Tudor's loved.

Simon Jenkins, the author of England's Thousand Best Houses, calls the Gothic staircase Pritchard's best work at Shipton. For once I'd have to agree with Mr Jenkins. The staircase is a delicious piece of Georgian Gothic style. 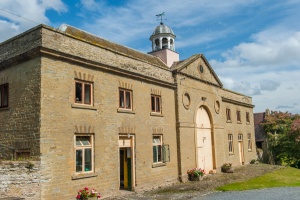 Close to the house are late 16th-century earthworks, and to the north is the circular late medieval dovecote. Also nearby are the remains of the deserted medieval village of Shipton.

It seems that when the Hall was being built, the Lutwyches thought the village ruined the view. So they had the village moved. All of it, save one lone house which you can just see from the front window of the Hall. If you look closely at the field across the road from the Hall you can still see the outline of house foundations from the original village.

Close by the Hall is the parish church of St James. The church dates to at least the 10th century, with a Norman tower, and a chancel built at the same time as the Hall.

The house and grounds are normally open from Easter through Summer or at other times for pre-booked groups. Please contact the property to verify current opening times. We also found that the Historic Houses Association website was a good source for opening details. 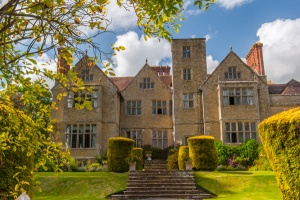 The front facade of Shipton Hall

We came to Shipton on a lovely summer afternoon in late August. We were met at the door by the owner, a lovely lady, who proceeded to take us around the house on a tour that lasted approximately 45 minutes. Unlike some 'tour by owner' experiences we have had lately, we got the distinct impression that she really enjoyed talking about her house, and enjoyed showing visitors around, telling the story of the house and its inhabitants over the centuries.

Even more, we got a real sense of how she and her husband enjoyed living in the Hall, and the challenges they faced in keeping a very old house in good shape. It was a very relaxed, very enjoyable tour, informal, and a pleasant experience. How informal? Well, she had a collection of her home-made jams and preserves for sale at the front desk. It was a nice touch, and one that brought home the point that Shipton is very much a family home.

One room came in for special notice during the tour. This was a first-floor bedroom where Elizabeth I stayed after her entourage became lost while travelling from Shrewsbury to Ludlow. She left behind a memento as thanks.

Our guide was quite proud of the fact that that was not the last monarch named Elizabeth to visit Shipton; Elizabeth II also came here to see some of her racehorses, which are kept close by. The Hall was thought to be the most suitable venue to host the royal party, so Shipton Hall can claim to be one of few houses to welcome both Elizabeth I and II.

A much more sombre tale associated with the house is the story of a Mytton daughter who fell in love with a local man. Her father disapproved of the marriage, however, and locked his daughter in her bedroom. Pining away, she etched a sad verse of poetry on one of the window panes. You can still read the verse, in an exquisitely clear script, amazingly small and neat.

That verse might have been the sad end to a star-crossed romance, but the story has a happy ending, for the girl's father relented, and the two lovers were married. Compare this story to the tragic tale of Hetty Walwyn of Hellens Manor, in Herefordshire, whose father locked her away for 30 years and never relented.

After the tour, we walked around the grounds, which did not take very long, for though the house is lovely, the gardens are limited to the space immediately around the house. There is beautifully clipped topiary in front of the house, but the rest is largely laid to lawn.

After a walk around the house, we climbed a few steps to the medieval dovecot. This was open, so we could walk inside and marvel and the row upon row of nesting boxes that took up the entire interior.

After exploring the dovecot we walked across the manor lawns again to St James church, on a small rise of ground behind a stone wall and a fringe of trees. Like the house, the church was a delight, with a Norman font, medieval floor tiles, a 16th-century memorial brass, and a memorial to 4 children of Shipton who sailed on the Mayflower.

Shipton Hall has changed its visiting policy. A notice on their website now states that the Hall will not be offering public visits from 2017. We'll keep an eye on this situation and update this page if anything changes. 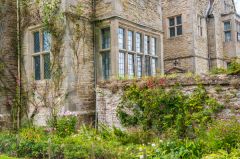 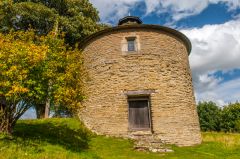 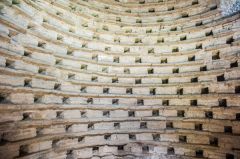 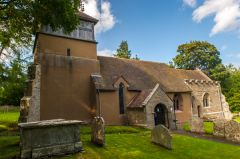 More self catering near Shipton Hall