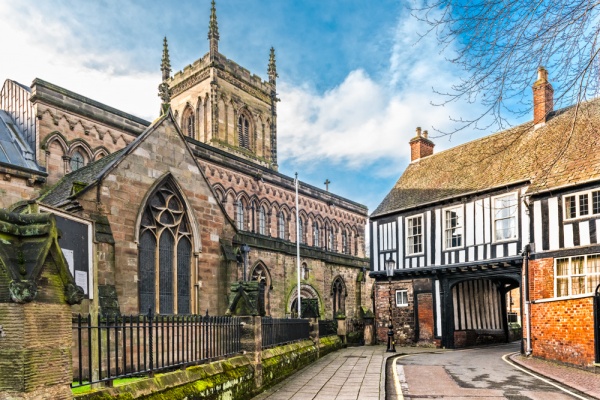 The church began in AD 1107 as a chapel for the castle, founded by Robert de Beaumont, Earl of Leicester. Local tradition suggests that there was a church on the site long before this, founded by Ethelflaeda, daughter of Alfred the Great. Ethelflaeda ruled the kingdom of Mercia and helped free the East Midlands from Danish occupation. 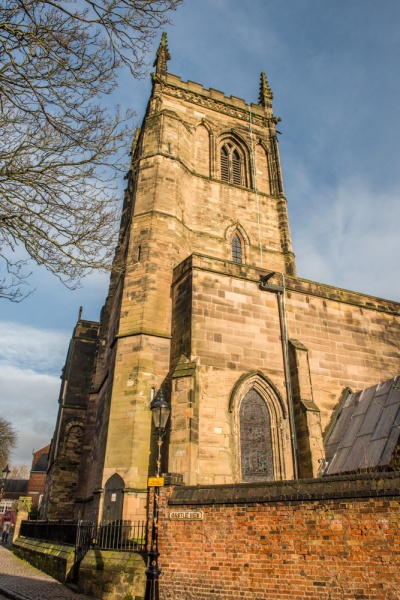 There is also said to have been a college of priests, known as the College of St Mary de Castro founded before the Norman Conquest. There is no proof that such a college existed, but we do know that in 1107 Robert de Beaumont founded a college of 12 secular canons under a dean at St Mary's Church, in order to pray for the souls of William the Conqueror, his queen Matilda, William II, Henry II and his wife and children, and Beaumont's own family and relatives. To support the college the Earl granted the revenues of All Saints, St Peter, and other nearby churches.

The college existed in its original form until 1143 when Robert le Bossu, the Earl's son and heir, gave the church revenue to his new abbey to the north of Leicester's city walls. The college was maintained throughout the medieval period by the abbey, with one of the abbey canons presiding over the college of priests, now composed of a chaplain, a sacrist, and six clerks. The college of priests was finally abolished under Edward VI's Chantry Act of 1547.

One of the oddities of St Mary's is the tower. The base was constructed within the church, not beside it, so that you can walk around three sides of the tower while you are inside the church.

The tower base has a much more practical purpose than just acting as a support for the rest of the structure. Slender slit windows suggest that the tower was part of the castle defences, built with arrow slits so that soldiers could fire upon attackers. The tower may have been directly linked to the castle walls and a parapet walk.

Highlights inside the church include two sedilia (stone seats for clergy) and two piscinas for washing holy vessels. 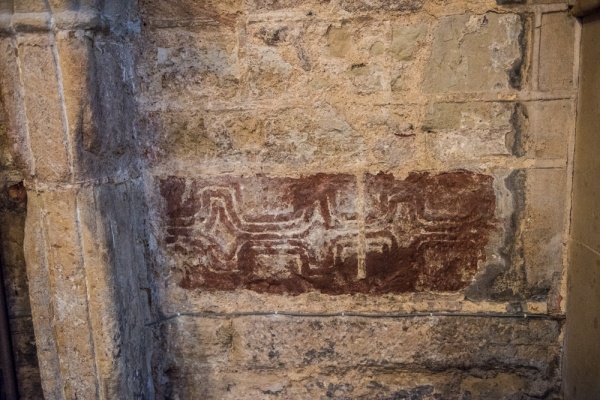 Why have two piscinas and sedilias? St Mary's was, in fact, two churches at once, existing side by side. One church served the castle, the other church served the townsfolk. This dual-purpose arrangement did not last, and eventually the two congregations were combined. The legacy of the dual-church is that the south aisle is extraordinarily wide, because it originally served as a nave.

This 'church within a church' theme is obvious everywhere you look. There are blocked clerestory window openings in the aisle, and Norman arches that lead nowhere. Some of this split-personality is the result of a restoration by Sir George Gilbert Scott in the late 19th century.

Another highlight is the richly carved 13th-century font, with small heads and winged figures decorating the font bowl. There are some exceptional medieval carvings on the chancel arcade, and a Roman carved stone is set into the west wall of the church. The timber roof is 16th century, restored in the Victorian period. 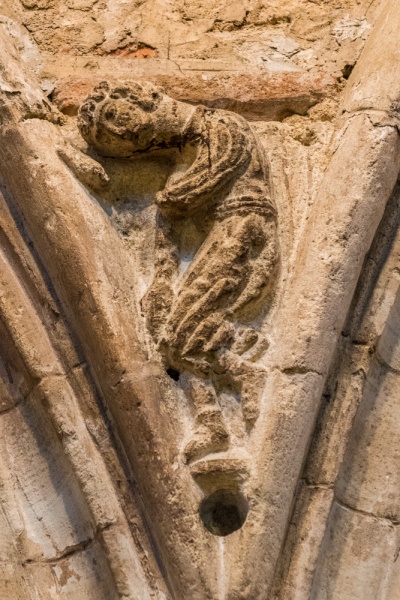 In its role as the castle chapel, St Mary's was used for the ceremony of knighting the boy-king Henry VI in 1426, at the age of five. It was also the place where poet Geoffrey Chaucer was married to Philippa Roet, lady-in-waiting to Queen Philippa of Hainault, and sister of Katherine Swynford, the mistress and later the wife of John of Gaunt, 1st Duke of Lancaster. The marriage took place sometime around 1366, when John of Gaunt owned Leicester Castle.

The church exterior is festooned with grotesquely carved heads that look out over the large churchyard - the oldest continuously used open space in Leicester's city centre. At the far end of the churchyard is a section of the medieval wall separating the castle from The Newarke. It stands on the course of the old Roman city wall of Leicester.

The bogeyman figure of Black Annis, sometimes described as a blue-skinned witch, is said to haunt the area around the church. The story of Black Annis was used by parents to get their children to behave, as in "Do what I say or Black Annis will get you ...". There are regular ghost walk tours of the church, castle, and the surrounding area.

The church used to have a striking, slender spire that dominated the surrounding area. The spire became unsafe, and after efforts to raise money for its restoration were unsuccessful, it was removed in 2014.

St Mary de Castro is an exceptional historic building in a beautiful quiet location beside the castle. It is regularly open to the public. 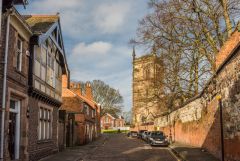 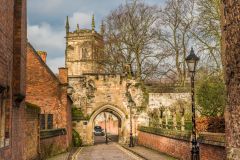 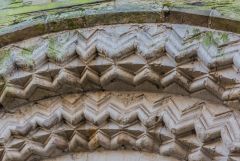 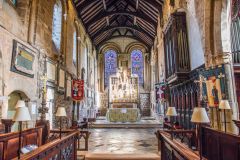 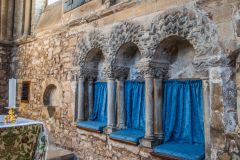 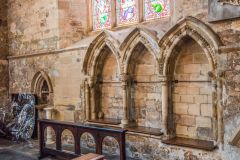 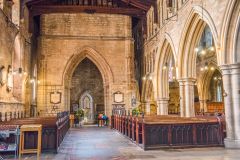