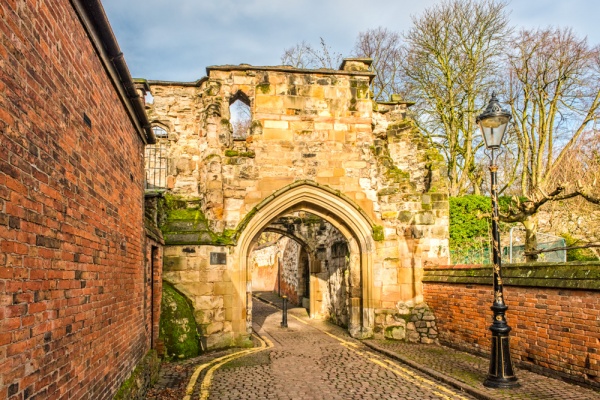 A few steps from Leicester Castle stands one of the city's most intriguing historic buildings and one of its least well-known. Prince Rupert's Gate gives access to Castle View, the cobbled road linking the castle yard with its 12th century great hall to The Newarke.

The name may give the wrong impression; though the gateway is named for King Charles I's cousin and military leader, Prince Rupert of the Rhine, it dates to several centuries before the Civil War and Rupert's role in the bloody siege of Leicester.

The gateway may more properly be called the Turret Gateway and was built in 1422-3 to control access to the castle's inner bailey from The Newarke at the southern end of the castle precinct. The Newarke (or 'New Work') was a stone wall enclosing the outer bailey. The wall was built around 1330 by Henry, Earl of Lancaster. 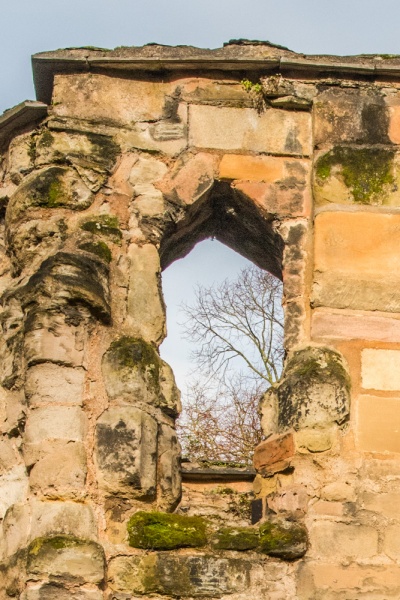 A ruined window above the gateway arch

Prince Rupert led an attack on The Newarke and the Turret Gate during the siege of Leicester. The Prince and King Charles battered the town walls with artillery and breached the defences. Fighting around the gateway was fierce and deadly. The townsfolk joined with Parliamentary soldiers in house to house combat, and the Royalist response was swift and merciless. They slaughtered combatants without quarter, killing men, women, and children. The Royalist treatment of the citizens of Leicester was later used as propaganda by the Parliamentarians.

Until the 19th century, a gateway in the neighbouring stretch of wall was known as Rupert's Gateway. That section of wall was torn down, and the name seems to have been erroneously transferred to the Turret Gateway.

The Newarke area was largely occupied by religious buildings such as the Church of St Mary of the Annunciation, where Richard III's body was put on public display before burial at nearby Greyfriars. The church stood on the site now occupied by the Simon de Montfort University Hawthorn Building, but a section of stone arches is preserved in the University's Heritage Centre.

A few steps from the gateway is Wigston's Chantry House, built around 1511 by William Wigston as a residence for two chantry priests whose job was to pray for his soul in a chantry chapel inside St Mary's church. The Chantry House now forms part of the Newarke Houses Museum.

On the other side of the gateway is Castle View, a row of picturesque historic buildings, leading to the castle great hall, which once served as the main Leicester courthouse. Across from the great hall looms St Mary de Castro church, where Geoffrey Chaucer was married and where Henry VI was knighted. 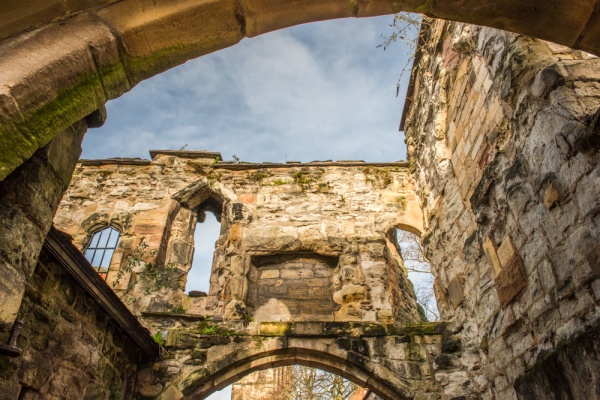 Looking up through the centre of the gateway

The Legend of Black Annis

The legend of Black Annis, or Black Agnes, is linked to the history of Prince Rupert's Gate. Black Annis was said to be a blue-faced witch with iron claws who lived in a cave in Leicestershire's Dane Hills and feasted on children. After devouring the children she is said to tan their skin and wear them around her waist. The Black Annis story was often used by parents, who made children behave by warning them that Black Annis would catch them if they disobeyed.

According to tradition Black Annis lurks in the shadows within the Prince Rupert Gate and attacks any who dare pass through the gateway at midnight. She is said to use underground tunnels to reach the city from her cave beyond the River Soar. 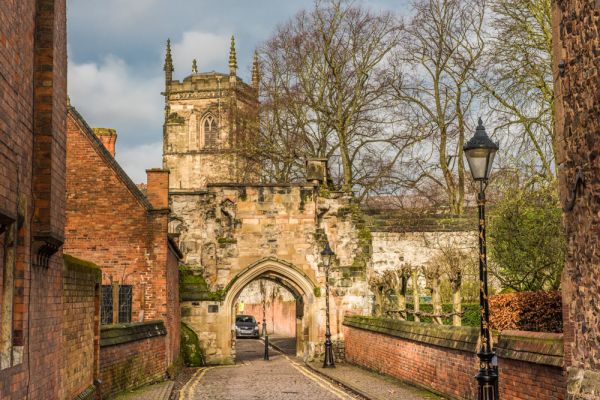 The gateway with St Mary de Castro beyond