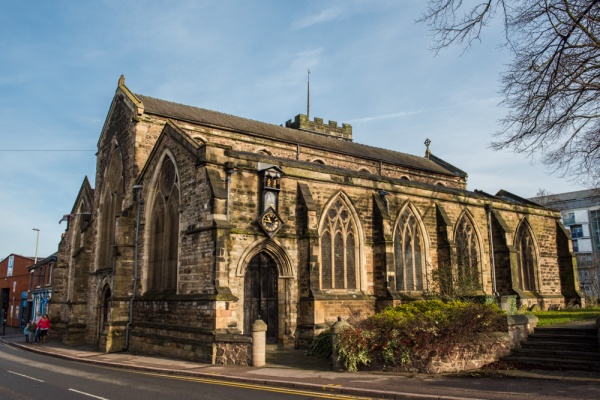 One of the oldest churches in Leicester, situated near the site of the old North Gate to the city. All Saints dates to the Norman period and retains several interesting Norman features.

The west doorway is a lovely piece of Norman craftsmanship, with traditional carvings such as zig-zag patterns. The interior has quite a few items of interest. Among these is a 13th-century circular font, with stiff-leaf foliage carving. In the south aisle is an early medieval tomb niche, and a 14th-century sedilia. A more modern feature is a 1680 Mayor's chair.

On the south wall is a memorial to Alderman Gabriel Newton, who was buried here on 26 October 1762. Alderman Newton was married three times and had numerous children, but all died young. with no heirs, Newton used his money to found a school for 35 poor boys in Leicester and several other schools in nearby towns. Students were given deep green jackets to wear, and the school was popularly known as Green Coat School.

Alderman Newton's School stood beside St Martin's church and operated from 1784-1999. Newton's generosity and desire to help the working classes meant that Alderman Newton was one of four Leicester 'luminaries' commemorated with statues on the Watch Tower in the city centre. 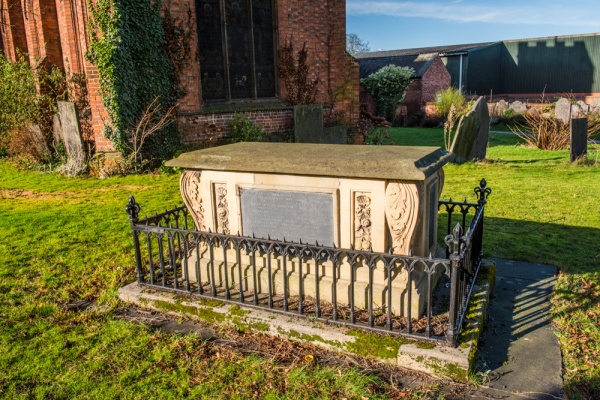 The 1762 memorial to Alderman Gabriel Newton

The stained-glass windows are by some of the Victorian era's greatest manufacturers, including William Morris and the London firm of Clayton & Bell. One window commemorates Alderman Newton and depicts him as a choir boy beside a bishop and a Green Coat student.

The colourful pulpit dates to the 15th century. It has been repainted in its original vivid colours. The aisle roof above still has its medieval timbers with moulded tie-beams and intricate carvings. The beams are supported on carved corbel heads, many featuring grotesque faces.

All Saints may have been one of the 6 Leicester churches listed in the Domesday Book of 1086, suggesting that its origins may lie in the late Saxon period. In 1143 it was given to Leicester Abbey by Robert le Bossu, Earl of Leicester. From 1220 the Abbey had the right to appoint a vicar and collect church tithes.

The church was almost completely rebuilt around 1300, and the Guild of the Assumption took over the south aisle. By 1389 the Guild could afford to appoint a second chaplain along with 20 brethren.

One of the most fascinating episodes from the history of All Saints relates to a medieval Mayor. In 1417 Margery Kempe (1373-c.1438) was put on trial in the church, accused of being a Lollard (dissenting from traditional church beliefs). Kempe was a mystic, with connections to Julian of Norwich, and author of what has been called the first autobiography in English, The Book of Margery Kempe, dictated around 1430.

The book was unknown for centuries until the manuscript was discovered in 1934, lying hidden in a private library in Lancashire. She was also a mother of 14 and daughter of a former Mayor of King's Lynn. The trial at All Saints was headed by the Mayor of Leicester. Kempe was not really a Lollard and was able to escape the terminal sentence that usually followed an accusation of heresy against Lollards, and was freed.

During the 15th century, the nave roof was raised to add a clerestory, and the tower gained an extra stage. One unusual feature of All Saints is that the tower is placed at the north-east corner, rather than the traditional west end or centre.

In 1583 the Court of Assize was moved from the castle to all Saints due to an outbreak of the plague within the city. 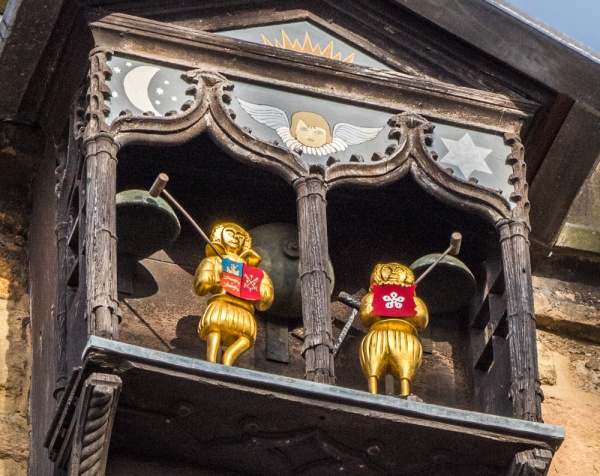 Around 1620 the remarkable parish clock was inserted above the south door, making it one of the oldest parish clocks in the country. Inside the church, you can see the mechanical clock workings, but outside you can see that the clock features a pair of gilded figures called striking jacks that literally strike the hours. Over the gilded striking jacks is a painting of Father Time, added in 1899. A replica of the clock stands in the Leicester Guildhall.

The church was restored twice during the 19th century, with architect Henry Goddard adding pews and replacing the roof. The tower was restored from 1894. In the 1960s the construction of a new city bypass road left All Saints stranded, and the congregation fell to an unsustainable low. The church was declared redundant in 1983 and is now cared for by the Churches Conservation Trust. It is usually kept locked but a key is available at the art gallery immediately beside the church during normal business hours. 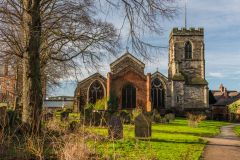 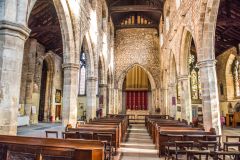 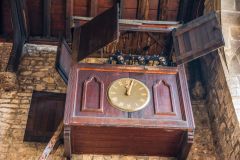 More self catering near Leicester, All Saints Church >>

More bed and breakfasts near Leicester, All Saints Church >>