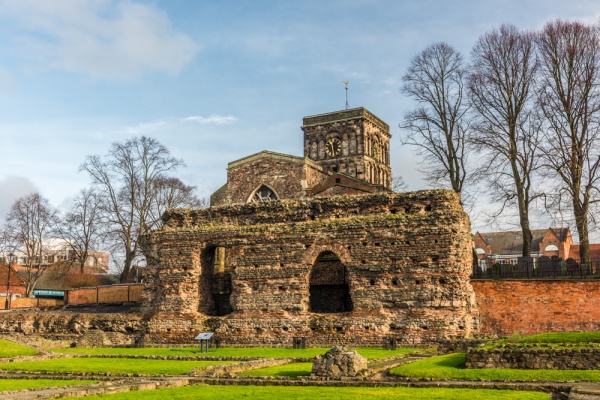 The Jewry Wall is a section of wall from a Roman bathhouse, standing in the middle of modern Leicester, a few blocks from the cathedral. The wall is over 30 feet high, and the foundation walls of the bathhouse can be seen at the foot of the wall. Immediately beside the Wall is a museum of Leicester area archaeology.

The bathhouse and next door exercise hall were built around AD 154 as part of the old Roman town of Ratae Coritanorum, the forerunner of Leicester. The bathhouse layout is clearly shown, with modern replica hypocaust (underfloor heating) columns showing what the original hypocaust would have looked like. The bath house consisted of three large calderia (hot baths) and three smaller tepidaria (warm baths).

After the Romans left the exercise hall was demolished to make way for a Saxon church, an ancestor of the medieval church of St Nicholas which stands beside the wall today. In the medieval period, the rest of the Roma baths were destroyed so the stone could be used for other building projects but the wall was spared because it was then serving as the west wall of St Nicholas church.

The Jewry Wall was incorporated into a succession of industrial and domestic buildings. In 1920 the site was cleared of modern buildings, leaving the Jewry Wall standing on its own.

The name is confusing; it has nothing to do with Jews. The name probably comes from 'jurats', the two dozen medieval Borough councillors who met in St Nicholas churchyard. When antiquarian William Stukeley drew a map of Leicester in 1722 he marked it 'The Jury Wall'. 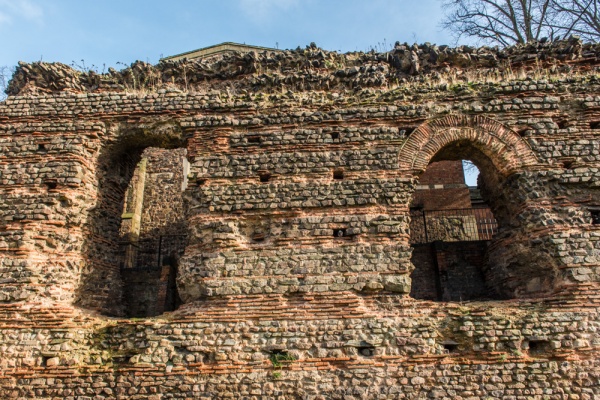 A closer look at the Wall arches

By Stukeley's time, the ancient wall was generally known as the Temple of Janus. Janus was the Roman god of gateways, and since the arched wall resembled a gateway, it was thought to have been the west gate of the Roman town. It was not until the 19th century that the spelling had transformed into the modern form of Jewry, though there has never been a connection to any Jewish presence in the area.

The wall was built using six different types of stone, from granite to millstone grit. The arched openings are tiled, and tiles are built into the course of the wall. You can see putlog holes where the Romans inserted scaffolding timbers while constructing the wall.

There is much more to the Jewry Wal than just the wall itself and the remains of the Roman baths. The museum is outstanding, with displays not only of finds from the site but of historic artefacts from around Leicester and the surrounding area. Here are just a few of the highlights that caught our eye.

A 2nd-century Roman milestone discovered by the Fosse Way in 1771. It was probably erected during road repairs in anticipation of a visit by Emperor Hadrian around AD 120. The milestone bears the first Roman inscription found in Britain. The inscription reads, "IMP CAES DIV TRIAIN PARTH F DIV NEP TRIAIN HADRIAN AVS P P TB POT IV COS III A RATIS M II". The translation is, "The Emperor Caesar Trajan Hadrian Augustus, son of the defied Trajan, conqueror of Parthia, grandson of the deified Nerva, father of his country, in the fourth year of tribunucian power, three times consul, from Ratae 2 miles".

The inscription names the Roman settlement at Leicester Ratis, a form of the name Ratae.

One of the museum's prizes is this series of 24 stained glass panels from Wigston's House at 18 Highcross Street. The glass was made around 1500 and is an exceptionally rare collection of medieval glass from a private house. The glass was probably made for Roger Wigston, or Wygstone, a rich wool merchant and Mayor of Leicester. The glass depicts Biblical scenes, heraldic symbols, and people linked to Leicester's history.

This series of Roman frescoes were found in the ruins of a Roman villa dubbed 'The Cherry Orchard Villa' on Norfolk Street, near the River Soar. One of the best-preserved finds from the villa is the 'Dolphin Pavement' showing a seashell flanked by dolphins. 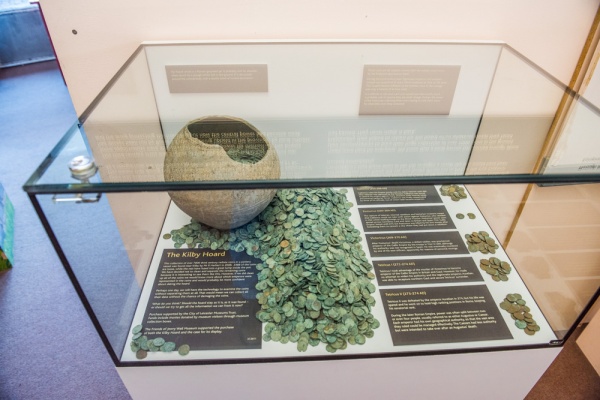 The Kilby Hoard of Roman coins

A rare 1st century AD sculpture of a young man's head, carved from a piece of oolitic limestone. It may possibly be meant to represent Emperor Nero as a young man.

In 2008 a pottery vessel containing over 7000 coins was discovered near Kilby. Some 2388 of the coins were loose but the rest had become fused over time into a solid lump. The coins include those minted during the reigns of Gallienus, Postumus, Victorinus, Tetricus I, and Tetricus II, spanning the years AD 253-275.

The Jewry Wall Museum is free to enter and is well worth taking the time to explore. There is a remarkable range of historic items on show, so do give yourself plenty of time to explore. The museum is easy to reach from central Leicester and is located immediately beside St Nicholas Church. 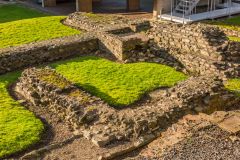 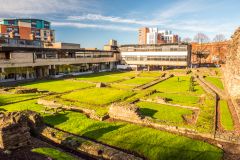 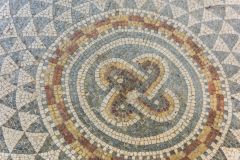 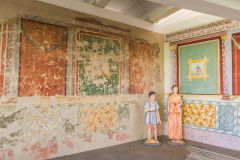