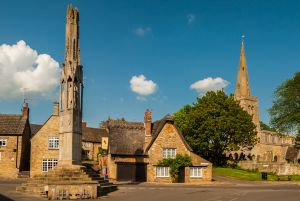 In 1290, Eleanor of Castile, wife of Edward I, died in Harby, Nottinghamshire. Her body was carried in stages from Harby back to London for burial. On the night of 6 December 1290, the procession stopped at this little village in Northamptonshire.

As a mark of his grief at his wife's death, Edward set up an elaborate commemorative cross at each location where Eleanor's cortege rested for the night. These crosses came to be known as Eleanor Crosses.

Only three Eleanor Crosses remain intact today, and the Geddington Cross is one of these. It was probably built in 1294. The cross is triangular and rises in stages from a stepped base to an ornate pinnacle. The lower two stages are beautifully embellished, and these give way to a third stage with canopied statues, below the hexagonal pinnacle. There was originally a terminal topping the pinnacle, but this has gone missing.

At the base of the cross on the south-west side is a conduit house, built in 1769, making this the only British example of a public water supply incorporated into a royal memorial.

NB. The most famous of the Eleanor Crosses gave its name to Charing Cross, in London. The other two surviving crosses are at Hardingstone, Northamptonshire, and Waltham Cross, Hertfordshire, though neither is as well preserved as the Geddington Cross. 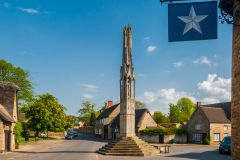