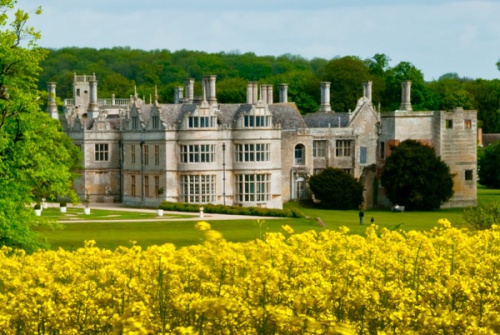 One of the great Elizabethan houses of England, Kirby Hall was built for Sir Humphrey Stafford of Blatherwick, beginning in 1570. In 1575 the property was purchased by Sir Christopher Hatton of Holdenby, who later became Elizabeth I's Lord Chancellor. His descendant Sir Christopher Hatton III had Inigo Jones rebuild Kirby in grand Jacobean style, creating a superb symmetrical house set in stylish formal gardens. The gardens were proudly described by the fourth Sir Christopher Hatton as the finest in England.

There was probably a late medieval house at Kirby before the estate was purchased by Sir Humphrey Stafford in 1542. The Kirby estate at that time was owned partly by the Augustinian priors of Fineshade and partly by the Brudenelle family of Deene Park.

We don't know if Stafford had begun to remodel the earlier house before he died in 1548, but his son, also named Humphrey, certainly did. The junior Stafford rose to become Sheriff of Northamptonshire in 1566 and he needed a house commensurate with his social standing.

The final impetus for Kirby Hall probably came in 1569, when Elizabeth passed through Northamptonshire and stayed at the neighbouring manor of Deene Park. Sir Humphrey Stafford lacked a suitable house to entertain the royal court, and perhaps this moved him to action. For it was in the following year of 1570 that Stafford began to create a grand new house at Kirby. 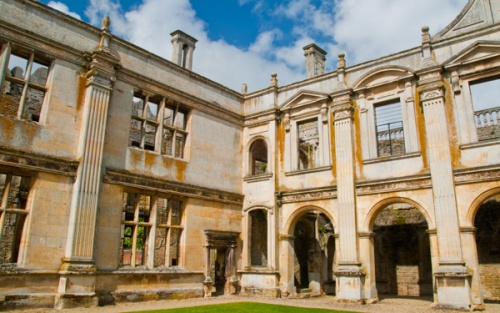 Unusually, we have a copy of the original design, created years later by John Thorpe, member of a well-known family of masons from nearby Kingscliffe village. Thorpe's plan of Kirby shows a rectangular layout around a courtyard, with projecting arms of the longest ranges, so that from above the layout looks rather like an elaborate H.

Thorpe wrote on the plan 'Kerby whereof I layd ye first stone AD 1570'. However, this doesn't mean John Thorpe designed the house, as he was only 7 years old in 1570!

It seems very likely, then, that the architect was John's father Thomas Thorpe, who gave the honour of laying the foundation stone for the new house to his young son.

The house was set on the edge of a small village which had existed since before the Domesday Book of 1086. Never very large, Kirby village was practically deserted by the time Stafford began his manor, and the last few houses and parish church were pulled down to make room for the later Jacobean garden. Earthen mounds south-east of the Hall mark the last vestiges of the lost medieval village. 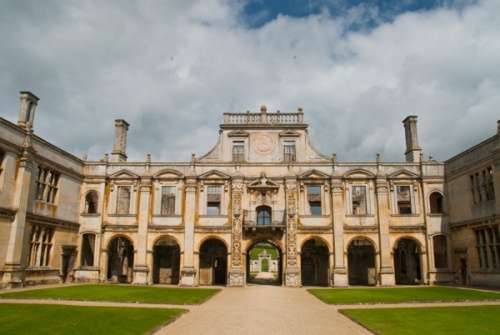 The inner courtyard and gateway

The Hattons of Kirby

Sir Humphrey Stafford's new house was built in a quasi-French style, unusual for the time. But the house was still unfinished in 1575 when he sold the Kirby estate to Sir Christopher Hatton of Holdenby, one of the highest of high-flying courtiers at the court of Elizabeth I.

Rumours suggested that Hatton caught the queen's eye for his skill at dancing, but he must have other qualities, for in time he became Lord Chancellor, one of the most important posts in the kingdom.

The immensely wealthy Hatton had numerous other houses and was content to let the partly finished manor at Kirby languish. He did not even visit his new property until 1583.

It was probably Hatton who added formal rooms to the south west of the main house block, probably as a suite of high-status rooms for royal visitors. By the turn of the 17th century, Hatton's wealth had diminished, and he was forced to sell Kirby to the crown. 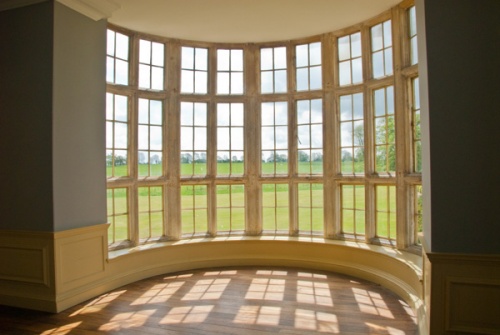 Hatton died childless, and Kirby passed through a nephew to a distant relation, another Sir Christopher Hatton. This second Sir Christopher welcomed Queen Anne of Denmark, wife of James I England, to Kirby in 1605.

The king himself visited on at least 4 occasions when he and his entourage took over the entire south-west wing. On one of these royal visits the Duke of Lennox, a member of the royal party, died of ague while staying at Kirby.

The house had been gradually made more comfortable and adapted to passing fashion over the decades, but under the third Sir Christopher Hatton it was about to be completely overhauled. Sir Christopher III (later Baron Hatton) called in the leading architect of the day, Inigo Jones, to modernise the outmoded Elizabethan house.

This Jones did in his own inimitable style so that the current building is a beautiful mix of classical Jacobean and grand Elizabethan design. Though he lavished money on Kirby, Hatton III seems to have been content to amuse himself in London and leave the practical management of the house to his wife, though without necessarily making sure she had the funds to do so.

In 1670 the estate passed to his son, Sir Christopher Hatton IV. Hatton served as governor of Gurnsey, and it was while visiting him there that his wife Cecilia and mother Elizabeth were killed when lightning struck the castle they were staying in, and the gunpowder in the castle magazine exploded.

Hatton remarried, and again left the management of Kirby to his wife - though without sending her the money to pay for essential maintenance - a habit it seems. 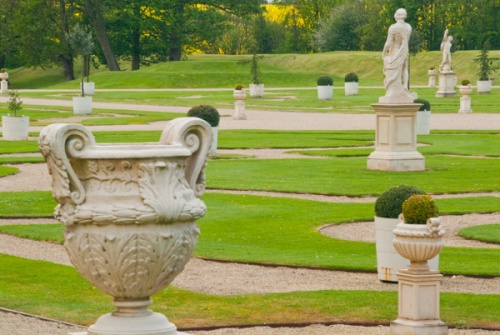 The Hatton family remained in possession of Kirby Hall until 1764 when it passed to the Finch-Hattons. Descendants of the Finch-Hattons still retain the estate today, though the house is now cared for by English Heritage.

Kirby Hall is a symmetrical house; almost every feature on either side of the great central portico is mirrored on the other side. Late 16th century stables stand to the north of the house.

Part of the house is without a roof, but most of the walls stand to their original height, as does the impressive classical porch, decorated by Nicholas Stone. Within, the interiors are sumptuously furnished and decorated in 17th and 18th-century style.

Film enthusiasts will recognize Kirby Hall for its appearance in the 1999 adaptation of Jane Austen's Mansfield Park. 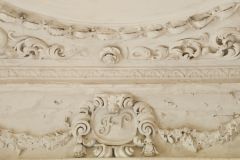 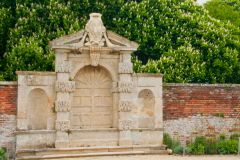 More self catering near Kirby Hall