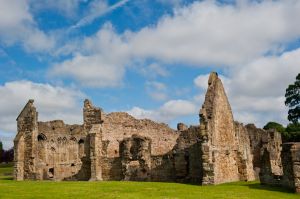 Basingwerk was originally a Savigniac monastery founded in 1131 under the patronage of Ranulf, Earl of Chester. In 1147 the house became a Cistercian establishment, and in 1240 Dafydd ap Llywelyn gave the monks the church and shrine of St. Winifred at Holywell.

At one time Basingwerk was a prosperous house, with lands in England and grazing land for over 2,000 sheep, but by the time of the Dissolution only 6 monks remained.

Ranulf de Gernon was earl of Chester from 1129-1153. He offered Basingwerk to monks of the Norman abbey of Savigny, which enjoyed a briefly fashionable status in Norman Britain. The first monks from Savigny probably lived within the protective confines of a nearby Norman fortress known as Hen Blas.

The Savigniac order merged with the Cistercian order in 1147 and then a decade later the abbey was granted to Buildwas Abbey in Shropshire. In that same year, Henry II effectively re-founded the abbey, around the time the monks moved from Hen Blas to Basingwerk, at what is now called Greenfield. Over the next few centuries both English and Welsh nobility gave grants of land to the monks of Basingwerk. Henry II gave them estates in Derbyshire, and Dafydd ap Llywelyn gave them nearby Holywell church, pilgrimage chapel, and the shrine of St Winifred.

Much of what we see today is the result of work initiated by Abbot Thomas Pennant (1481-1522), who seems to have had a taste for music. Contemporary records say that he was 'a generous patron of the bards'.

At the Dissolution the choir stalls were removed to St Mary on the Hill in Chester, and lead from the church roof was used to repair Holt Castle. 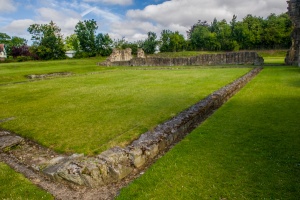 The lowest sections of the chapter house walls and the east range are probably mid to late 12th century. Most of the remains, however, date to a major rebuilding programme in the 13th century.

Remains of an early 13th-century church with a pair of east chapels can be seen. The chapter house was rebuilt at the same time, beside a monk's day room with a dormitory above. The round-headed 13th-century arcading in the chapter house is one of the highlights at Basingwerk.

At right angles to the cloister is the best-preserved part of the abbey, the mid 13th-century refectory, with lancet windows and lovely hooded moulding. You can see parts of the reader's pulpit. Also in good condition is the west wall of the south transept, which still stands to a great height.

There is parking at the neighbouring Green Field Heritage Park off the A548, or if you fancy an enjoyable walk, the Wat's Dyke Way footpath just behind the abbey site connects Basingwerk to St Winifred's Holy Well, a walk of just over 1 mile through pleasant woodland. I've taken this walk both ways and it really is quite enjoyable.

I was very favourably impressed with Basingwerk; to be honest I hadn't expected much beyond a few ruined walls, but I was very pleasantly surprised by just how much of the site is still there and the very high quality of the architecture. Yes, the abbey is a ruin, but the ruins are in quite good condition generally, and the location feels secluded and peaceful even though it is quite close to the coast road and to the Heritage Park. 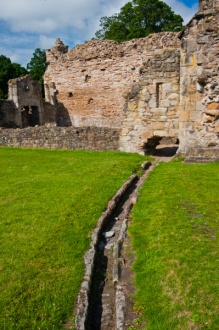 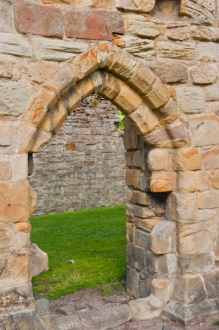 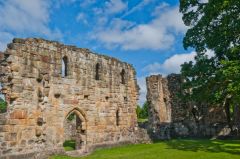 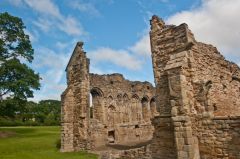 More self catering near Basingwerk Abbey >> This detached bungalow lies in Holywell and can sleep six people in three bedrooms.
Sleeps 6 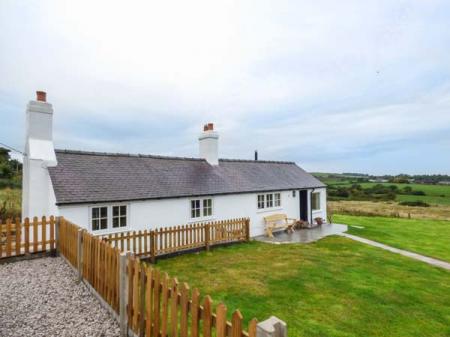 This charming semi-detached cottage located in the small village of Trelogan near Holywell, sleeps four people in two bedrooms.
Sleeps 4