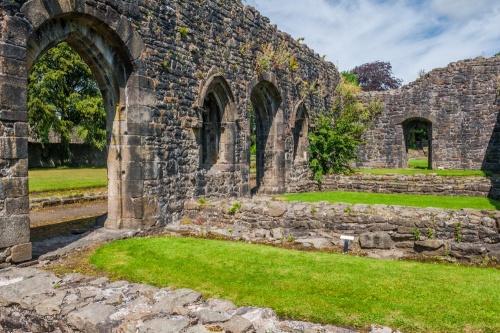 Whalley Abbey is a ruinous 13th-century Cistercian abbey on the banks of the River Calder in the peaceful Ribble Valley in Lancashire. The abbey site is owned by the Diocese of Blackburn, who operate a conference and retreat centre and offer bed and breakfast accommodation in a setting of outstanding historical significance. Visitors are welcome to explore the abbey ruins.

In 1178 John fitz Richard, constable for the powerful Earls of Chester, founded a Cistercian abbey at Stanlow Point, Cheshire, on the River Mersey. The exposed riverside site left Stanlow Abbey at the mercy of storms and flooding. Life must have been miserable for the monks of Stanlow, for they petitioned the Pope for permission to move to a better location.

In 1296 the Pope granted permission and the monks moved north to the Whalley, Lancashire where they built a new monastery in a sheltered location beside the River Calder. A few monks stayed behind at Stanlow and Stanlow became a cell of Whalley Abbey. 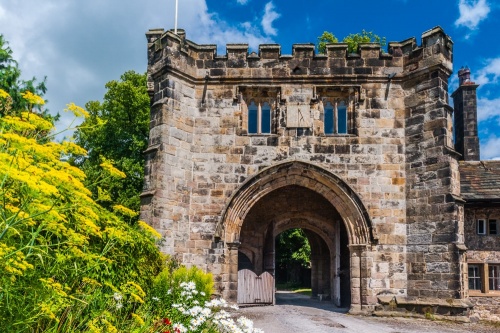 There was already a chapel on the site, erected by Peter of Chester, the rector of Whalley and that 13th-century building was incorporated into the new monastery. The foundation stone for the new abbey church was laid in June 1296 by Henry de Lacy, the 10th Baron of Halton. Stone for the new construction was quarried at Simonstone and Read.

The oldest standing structure is the abbey's north-west gatehouse, begun in 1320. The church was finished in 1380 and the infirmary, abbot's lodging, and cloister were finished by the 1440s.

The abbey layout is odd. Cistercian monasteries always followed the same layout, with the abbey church aligned on an east/west axis. The church formed the northern range of a cloister, with domestic buildings including the abbey kitchens in the south range, the chapter house, abbot's lodgings, and parlour in the east range, and the lay brother's quarters forming the west range. 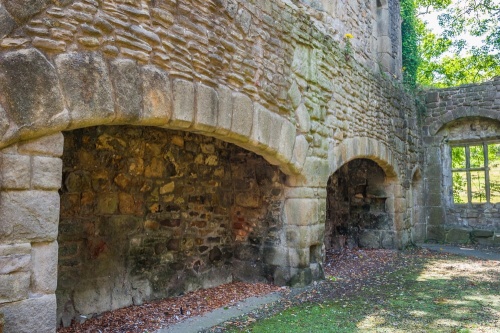 Huge fireplaces in the abbot's kitchen

Whalley Abbey is different, however. In order to take advantage of the water supply from the River Calder, the church was aligned on a NNW/SSE axis, so that it formed the NNE range. The other ranges were simply rotated to create a square cloister area in the middle of the site.

Most of the monastic buildings were pulled down after the abbey was suppressed by Henry VIII in 1536. The last abbot was John Paslew, who rebelled against the king's plans to dissolve the monasteries and joined the short-lived Pilgrimage of Grace. Paslew paid for his disobedience with his life when he was executed at Lancaster for treason.

Stone from the abbey was used to construct local buildings and the abbot's lodging and infirmary were rebuilt as a manor house by Ralph Assheton (aka Ashton). In 1923 the Church of England bought the manor house and it later passed to the diocese of Blackburn. 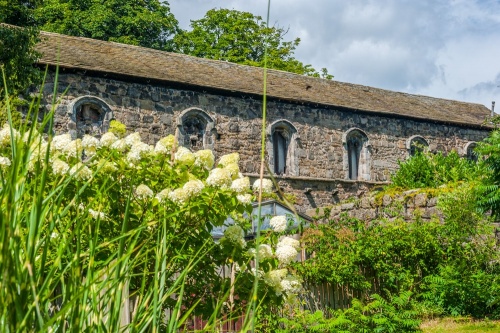 The abbey church survives only as foundation walls. You can see the remains of the monks' night stairs at the southern end of the south transept and the remains of a doorway leading to the vestry in the south wall. Set into the turf are fragments of three medieval gravestones. One of these marks the burial place of a prior named Thomas Wood, while the other commemorates a monk named John Walton.

The north transept is larger and has three chapels on its east side. There are four fragments of medieval gravestones set into the ground. You can see the foundations of two large piers that supported the crossing tower and eight piers in the nave that supported the north and south arcades.

The south wall of the nave still stands to a height of 3m. At the western end of the nave is the English Martyrs' Catholic Church. 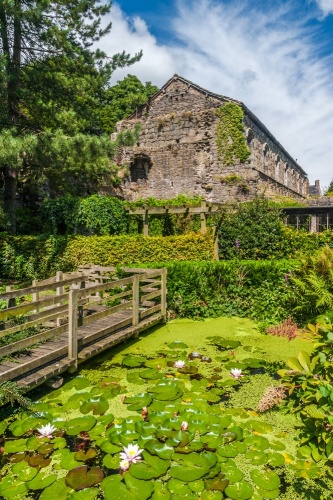 A lily pond and the
lay brothers' dorter

When this area was excavated in the 1930s a skeleton was found under the De Lacy gravestone. This is thought to have been one of the founder's family. The north range is formed by the nave of the parish church of St Mary.

The best-preserved part of the Abbey is the west range, where the lay brothers lived. Lay brothers were not clerics and did not take holy orders. They lived a life of service focussed on work, often at a particular craft or trade. They lived apart from the choir monks, whose main focus was prayer.

The lay brothers' dorter (dormitory) stands to its full two-storey height and is roofed.

On the site of the abbey infirmary stand the remains of the long gallery built by the Assheton family for their Elizabethan manor house. 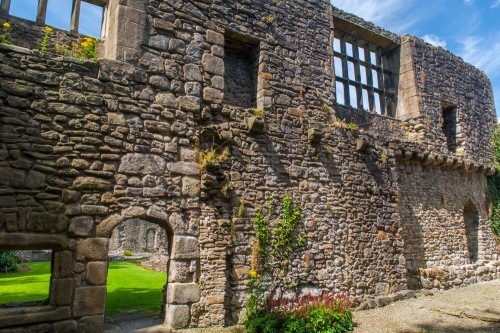 The Whalley Abbey entrance is on The Sands, off Church Lane and the B6246. The abbey grounds are open daily to visitors. You can also book guided tours, led by resident monks. You enter the abbey grounds through the north-east gateway, which was completed around 1480. A short walk further west along The Sands is the north-west gatehouse, begun around 1320. This is now in the care of English Heritage and is outside the present abbey grounds.

Please take the time to visit the neighbouring parish church of St Mary, which features three Saxon crosses in the churchyard and a 3rd-century Roman altar stone inside the church.

More self catering near Whalley Abbey

Self Catering near Whalley