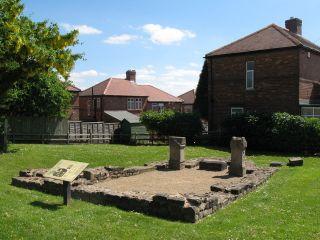 Benwell Roman Temple (Hadrian's Wall)
There are two Roman sites located close together in Benwell, a suburb of Newcastle upon Tyne. The first is the Benwell Roman Temple, a small temple dedicated to the local British god Antenociticus. The temple stands in what was once the vicus, a 2nd-century civilian settlement surrounding the Roman fort at Benwell.

A short distance away from the temple site is the Benwell Vallum Crossing, an exposed stone causeway built by the Romans to allow movement across the Vallum, or earthwork defences for Hadrian's Wall.

The metalled surface of the vallum crossing was begun in the Hadrian period, and renewed 5 more times, indicating that it was maintained until the end of the Roman period. This is the only known example of a Vallum crossing still in existence in Britain.