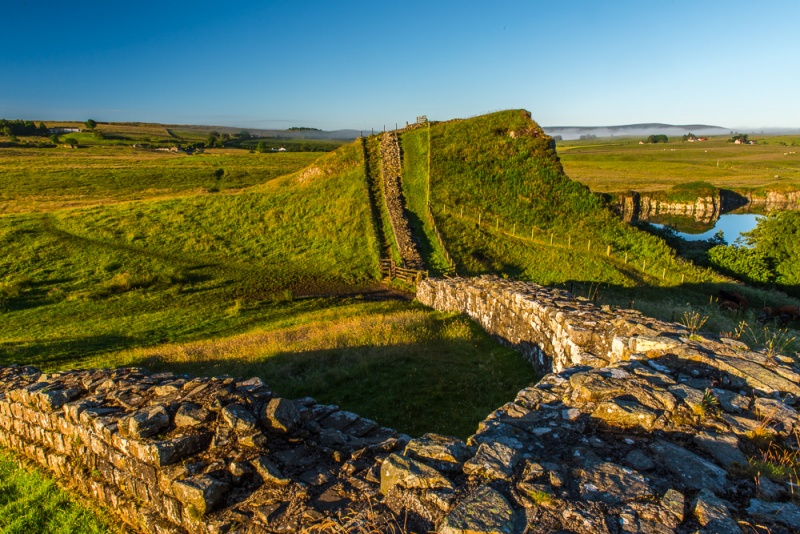 Hadrians Wall is a world heritage site in Northern England. The statistics and logistics are impressive. This massive Roman civil engineering project was begun approximately 1900 years ago. It is built of stone and wide enough for centurions to march three abreast along most of its length.

The wall cuts Northern Britain in half just south of the current Scottish Border. It is over 55 miles in length, from the Irish Sea; west of Carlisle to the mouth of the River Tyne on the east coast.

At regular intervals along its length are large fortifications like Vindolanda, capable of accommodating thousands of fighters, supported from bases reaching hundreds of miles south into England.

The Wall is a remarkable defensive fortification even by modern standards but it also a physical testament to the severe problems the Romans had subduing and defending their northern British frontier over the 300 hundred years of the rule. I still find it incredible that almost 2000 years ago, a military machine based on a small city-state in what is now Italy conquered much of the known world, then marched out of sunny Italy, up through France. After crossing the English channel they fought their way a further 400 hundred miles north into the heart of chilly Scotland.

Conventional wisdom (perhaps influenced by the historical conflicts between England and Scotland) suggests that this resistance originated north of the Wall in what is now Scotland. But a second scenario is possible. Roman contemporary commentators inform us that in 55 BC after conquering the Gaul's in France, an ambitious Roman military commander and prominent member of the senate in Rome, Julius Caesar, brought an expeditionary force across the English Channel to Kent to probe the defences of Britain.

A few months after arriving the mighty Caesar withdrew with his legions. Roman commentators report this as a planned withdrawal but it is possible that Julius Caesar was driven out. It was over a hundred years later in 64 A.D. that Roman legions led by Brutus once again crossed the Channel.

This time they had secured alliances in advance. Across Europe, the Romans had exploited historical rivalries between Celtic tribal peoples, offering alliances with one tribe in dispute with another, before inevitably subjugating both. Prior to this second landing, Roman emissaries had travelled 200 hundred miles north and secured an alliance with the Briganti tribe of northern England and southern Scotland.

This suggests that the Brigantes were pre-eminent among the tribes of Britain. They were based in a large territory bounded to the south by Chester and south Yorkshire and extending as far north as the Clyde-Forth estuaries. It seems a curious alliance, if you were planning to land an army in the south-east of England surely you would look for a less distant and more easily accessible ally.

The strong possibility exists that the Brigantes of northern England and southern Scotland were traditional rivals of the southern tribes. But it is also possible that the Brigantes were the dominant tribe of Britain, who mistakenly felt they could enter into an alliance with the Romans to carve up Briton.

Unhindered by counter attacks from the north, the Romans rapidly swept across southern England. The centres of Roman, "civitas", include many of our most ancient cities, London, Colchester, Bath, Winchester, Chichester, as far north as Lincoln and Chester.

If this scenario is to be entertained then the position of the Wall dividing the Brigantes tribal territory in half becomes crucial to our understanding. The most obvious modern comparison is the division of Berlin and Germany after WW2. Although formalised many centuries later, the current border between Scotland and England is certainly based on this ancient Roman division.

I will let Cornelius Tacitus a Roman senator writing in 102A.D. give us his account of the events that followed, which directly lead to the intervention of forces commanded by his father-in-law Cnaeus Julius Agricola, following the Roman conquest of southern Britain.

"Following the Roman capture of Caracatacus, (the tribal leader of the Silures in south Wales) the foremost military thinker left in Britain was Venutius, a Brigantian. Whilst he was married to Cartimandua, he enjoyed Roman protection and was a loyal ally; however, after they split he attacked her and even became embroiled in hostilities against us.

At first the Brigantian leaders confined themselves to fighting each other, as Cartimandua cleverly trapped Venutius' brother and dependants. Before long, however, Cartimandua's enemies became angry at the disgrace which they perceived to be involved in being ruled by a woman, and they attacked her kingdom with a hand picked band of strong, young warriors.

We were ready for this, and made a pre-emptive strike with a force of auxiliaries which we sent in to support Cartimandua. Although these support-troops achieved little to start with, they were eventually successful..."

We cannot expect Tacitus to be impartial and must regard with some suspicion his claims of outright success. Cartimandua had to be rescued from her captors and instead of being restored to the throne of her tribal territory, she disappears from history. The Wall was built and rebuilt several times and the Roman strategists also applied their maxim "divide and rule", to their treatment of the population.

South of the Wall they cultivated friendships and developed trade to the general benefit of the population, to the north of the Wall they applied the cruel strategies of subjugation and domination. By this method, they divided the people and created territorial boundaries that have endured into the present era.

It is easy to believe these early tribal peoples are just barbarians but Tacitus gives us an idea of both their eloquence and the hostility that was felt amongst the indigenous peoples on the receiving end of Agricola's campaigns in Scotland when he reports the comments of a Caledonian Chief.

"Today the uttermost parts of Britain are laid bare, there are no other tribes to come, nothing but sea and cliffs and these more deadly Romans, whose arrogance you shun in vain by obedience and self restraint.... If there enemy have wealth; they have greed, if he is poor; they are ambitious. East nor West has glutted them alone of all mankind they behold with the same passion of concupience waste alike and want."

This remote area of northern Britain undoubted played a major part in the making of modern Britain. There is good evidence that the Romans introduced Germanic legions to defend Hadrian's Wall, and it is their descendants that established one of the earliest Saxon kingdoms, Northumbria.

These Germanic legions were most probably the first English. When Roman authority finally collapsed after over 300 hundred years, they left a power vacuum. Many long-established and culturally distinct groups existed throughout Britain, some indigenous and some introduced by the Romans.

Romano-Britons and tribal Britons west of the Pennines, Jute's, Angles, Frisians along the eastern end of Hadrians Wall. Scots, Britons and Caledonians north of Hadrians Wall. Almost 500 hundred years of civil war ensued before the English nation emerged as the dominant power south of Hadrian's Wall, in the land that still bears their name.

Britain is a heavily populated land but if you visit any of the forts along the Wall you cannot escape the impression that in this area of Britain; the events of this distant past still exceed the achievements of the modern era.

The building of the Wall would be an impressive achievement in our time, but 1800 years ago when the population of Britain was 2 million approx. It is a stunning testimony to Roman engineering, but also graphically demonstrates the problems the Romans had in subduing the population of northern Britain throughout the period of their occupation.

About the Author:
Andrew Mercer was the webmaster of Alternative Routes - a website providing travel info on unusual and exotic destinations around the world. 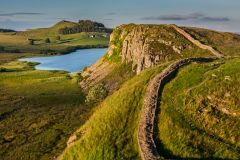 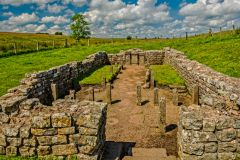 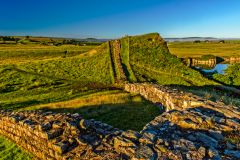 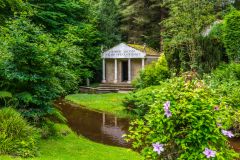 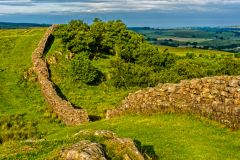 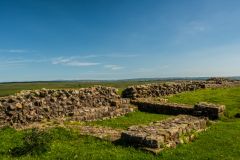 About Hadrian's Wall
Address: Hadrian's Wall, Northumberland, England
Attraction Type: Roman Site
Location: The B6318 is by far the best way to access points along the wall. The road follows the course of the Wall through much of western Northumberland.
Website: Hadrian's Wall
Location map
OS: NY797 686
Photo Credit: David Ross and Britain Express

More self catering near Hadrian's Wall