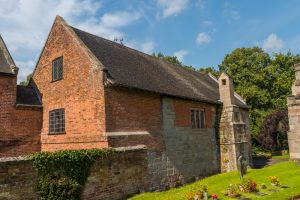 Norbury Old Manor from the churchyard

Beside the medieval parish church in Norbury stands this attractive 13th-century hall, remodelled in the 15th century. The most intriguing feature of Old Manor is the roof, built to an unusual king post design. There are also medieval cellars, fireplace, and an undercroft, plus a Tudor door and 17th century Flemish glass. The small gardens include a herbal parterre.

The manor was built for William Fitzherbert in the mid-13th century, but the Fitzherbert family owned the estate from the 12th century. The house was expanded around 1300 by Sir Henry Fitzherbert, and it retains many of its original medieval features. Ralph Fitzherbert built a large house at right angles to the Manor in the mid-15th century.

The Hall was badly damaged by Parliamentary troops during the Civil War, and when the owner, John Fitzherbert, died in 1649 it was left to decay, becoming almost derelict. John's cousin, William Fitzherbert, rebuilt the Tudor part of the houses around 1680, retaining many of the earlier features.

Old Manor is located beside the medieval parish church of St Mary and St Barlok, which is well worth a visit for its medieval stained glass and memorials to the Fitzherbert family of Old Manor, including an alabaster monument to Ralph Fitzherbert, who built the Tudor hall. 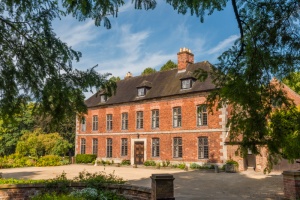 The manor house is owned by the National Trust but rented out as holiday accommodation, so opening hours are limited.

It is very easy to miss the drive to Old Manor; it is off the main road through Norbury, and though there is a sign beside the driveway entrance, it is not easy to spot from the road, and there is no other obvious signage. If all else fails, head for the church tower, and you'll be fine!

The manor is a house in two parts; from the main entrance what you see is a lovely red-brick 17th-century house, with a gravelled area in front and terraced gardens to one side. The Jacobean frontage hides the true history of Old Manor. If you go through an arch beside the house you will find yourself facing the oldest part of the house, set at right angles to the main block.

As soon as you enter the low doorway into the hall you realise that the red-brick hides a much earlier building. On the ground floor is a storage area, with stairs leading down to vaulted cellars. A second staircase leads up to the great hall, the heart of the medieval building. The landing outside the hall has fascinating 17th-century Flemish glass, in superb condition. 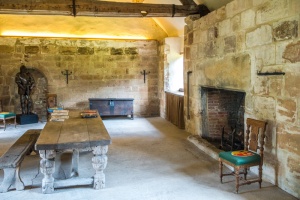 A Tudor doorway gives access to the hall itself. It is unusual to find the hall on the first floor; usually, the hall was on the ground floor and the first floor was reserved for private chambers.

This long, rectangular chamber has a large fireplace on one side and is furnished very simply with period furniture, including a well-worn Elizabethan table. Against the far wall is the oldest piece of furniture in the hall, a late medieval chest.

One unique feature of the hall is the unusual open-beam roof, built to a king-post design, but what really caught my eye was the medieval stained glass. Two windows look down on a lovely knot garden. Some windows facing the church had later heraldic glass with coats of arms to the Fitzherbert family and their connections.

Though the Jacobean house is let out for holiday accommodation, you are free to explore the lovely formal gardens. From the gardens, a trail leads to a summer house, then descends through pleasant woodland to the river below, where you can join footpaths along the water.

I loved the Old Manor; the combination of the Jacobean house and the earlier medieval hall is striking. The great hall is a delight, with its unusual roof structure. Please do take the time to explore the church, which is well worth a visit in its own right. The combination of the manor and the church together is just about the idyllic view of historic England you can imagine. 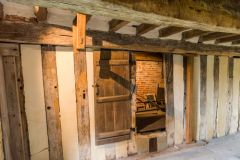 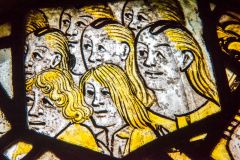 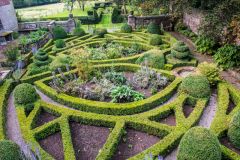 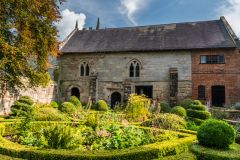 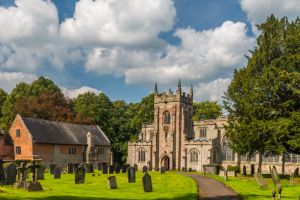 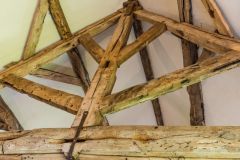 More self catering near Old Manor >>