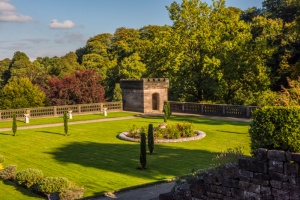 The Italianate Garden at Ilam Hall

Ilam Park is a large country park, owned by the National Trust, surrounding the remains of the 19th century mansion of Ilam Hall. The Park is criss-crossed by walking trails, with links to trails further afield. The park consists of 158 acres, on both sides of the River Manifold.

The Ilam Park estate forms part of a large tract of land run by the National Trust, taking in the Manifold Valley, Dovedale, Monyash, Stanton Moor, Miller's Dale, and the former parkland surrounding Ilam Hall. This is walking country, and many walkers choose to start or end their routes at the National Trust car park beside Ilam Hall.

A very popular route leads from the Hall to Dovedale, famous for its stepping stones across the River Dove. The Dove was made popular by Izaac Walton, whose book 'The Compleat Angler' brought hordes of avid fishermen to the area.

As the visitor numbers swelled in the Victorian period a series of stones were laid across a bend in the River Dove at the southern end of Dovedale. The stones were acquired by the National Trust in 1934, and the same time as Ilam Park itself.

The first Ilam Hall that we know of was built in the Elizabethan period for the Port family. In 1809 the Ports sold Ilam to David Pike Watts, a wealthy brewer from London. When Watts died the Hall was inherited by his daughter Mary, who was married to Jesse Watts-Russell, an MP and High Sherriff of Staffordshire.

Watts-Russell brought in John Shaw to design a new house, which was built by James Trubshaw, a builder and engineer. The house was finished by 1826, and the ornate Italianate garden designed at the same time. 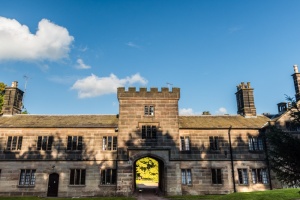 The gatehouse at Ilam Hall

By the 1930s the house had become derelict and was sold for demolition. Indeed, the destruction was already underway when Sir Robert McDougal stepped in. He purchased what was left of the house (the Great Hall, service wing, hall, and entrance porch) and gave it to the National Trust, on the understanding that the house would be used as a Youth Hostel.

Though owned by the National Trust, the Hall is still leased to the YHA and is a very popular hostel for walkers in the southern Peak District. What we see today is just one-third of the original Hall, but it is enough to see why it was granted Grade II* listed status as a historic building. The Hall grounds are open to the public, and there is a large National Trust car park (free to members).

The Hall itself is used as a youth hostel, and is not normally open to visitors (unless you are staying there), the National Trust maintains the Italianate Garden below the house, as well as Hinkley Wood, an ancient wooded area planted with limes. Hinkley Wood is a designated SSSI (Site of Special Scientific Interest). 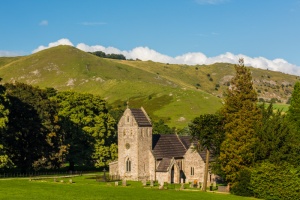 Visible from the Italianate Garden is Holy Cross church, a Victorian rebuilding of a medieval church, itself a rebuilding of an earlier Saxon church. That early church grew up around the shrine of St Bertram, a 6th-century hermit who took up a solitary life after his wife and child were killed by wolves in the forest that once covered the area.

The beautifully carved late Saxon font in the church depicts scenes from the saint's life, and in the south chapel is a 13th-century altar table said to be Bertram's shrine.

South of the church is St Bertram's Well, which existed as early as the Saxon period. If you follow the river course uphill you will find a grotto where writer William Congreave composed his first play, 'The Old Batchelor', while on a visit to Ilam in 1689. From here the path known as Paradise Walk brings you to a Saxon cross called The Battlestone, thought to commemorate a battle against the Danes.

It is worth taking the time to explore Ilam village. It is a very attractive example of a 19th-century estate village, moved here by Watts-Russell because it spoiled the view from his new Hall.

Watts-Russell built the entre village in Swiss style, because he thought the area reminded him of Alpine scenery. The most prominent local landmark is Ilam Cross, a scale model of a medieval Eleanor Cross, built in memory of Mary, Watts-Russell's wife, who died in 1840.

Another National Trust property nearby is Ecton Engine House, built in 1789 to serve a copper mine. There are open days during the summer with guided tours of the Engine House and mine.

I loved Ilam Park. The location is utterly superb. I don't think I've ever seen a more beautifully situated country church than Holy Cross, with the hills of Dovedale rising beyond it. The gardens surrounding the Hall are lovely, though small. The main reason to visit Ilam Park is to take advantage of walking, and the historic backdrop of the Hall, church, and village just adds extra interest to an already beautiful location. 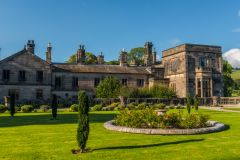 More self catering near Ilam Park and Hall

More bed and breakfasts near Ilam Park and Hall

Self Catering near Ilam